Before I write further comments about what I went through at the Maxine Waters town hall in Inglewood, here are the videos that you need to see, from beginning to end, regarding what was going on, what happened and what is happening now.

Check out what I saw before I lined up for the town hall at Inglewood High Schoo!


These posters were hilarious! 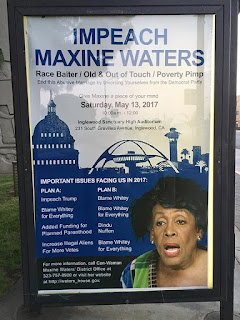 Then I lined up to enter the town hall:

They told me as soon as I lined up: "No signs."

Whatever happened to the First Amendment? Then they told me that I cannot wear my cape. WHAT?!

Here's the bulk of the town hall, in whic you will find that Maxine Waters does not feature, because she was more than an hour late!

There were all kinds of creeps, crooks, and crappy people of all backgrounds.

The Brown Supremacists showed up.

The Black Maxine supporters were trying to start stuff with me.

And my best friend Harry Tsang was there, too!

Oh -- and the Cudahy cheerleaders came too, including Edin Enamorado and Alex Garcia,

Whtat is all this?

And then it got really crazy!


Notice that one of the Brown Supremacists started yelling at me, but I was forced to leave.

I tried to get answers, but none were forthcoming:


Notice how quiet most of them got!

Then I debated and followed after the people who had tried to harrass and shame me:

First I put to shame those who were trying to shame me.

When they attacked me about my alliance with MassResistance--Pro-Family, anti-LGBT Agenda--they were left dumb and ashamed.

Why would they attack someone, anyone who wants the truth to be know and to see men and women living long and healthy lives?

Alan Garica, the Cudahy agitator who has routinely opposed me, actually settled down and listened to me. He actually acknowledged right there that members of his family voted for Donald Trump.

At the end of the discussion--which had started as a heated tirade--he shook my hand TWICE.

Yes, indeed, hell is freezing over:

1. Maxine Waters is afraid of me.
2. 25% (?) of Inglewood voters voted for Trump.
3. Black people are tired of Maxine Waters and the Democratic Party
4. I get maligned by the mainstream media--and I get more support and popularity
5. More young people are going conservative
6. Liberals and Bernie supporters are now listening to me!

Life is good, even in Ingle-HOOD!