The second official city council meeting for Cudahy took place on May 22.

The Brown Supremacists, headed by Naui the Ocelot, plotted to take over the city council chambers and push their perverse, insanely out-of-touch hatred of this country onto the city council and drive Jack Guerrero out of office.

We the People Rising, LA County for Trump, and lots of other patriots from around Southern California gathered at the meeting at Turner Hall in Clara Street Park.

I told everyone I could to get to the city hall at 6pm, but there were at least 20 people already in and around Turner Hall waiting to get into the chambers.

I brought another fellow patriot with me named Mark Rizk, a member of Arab-Christians for Trump. This was his first event, and he was more than ready for the challenge

Joseph Turner of American Children First also arrived, ready to inform the Cudahy City Council that if they did not rescind the offensive and unlawful sanctuary city policy, he would collect signatures and file an initiative to repeal the city's utility tax. The city already faces an economic disadvantage because other surrounding cities have no utility Tax. On top of that, the city's $8 million reserves have been drained down to less than $1 million, and the city council majority has done nothing to stop the runaway spending.

The rival Brown Supremacists, nativists, La Raza haters, and Antifa wannabes also showed up to unsettle the residents. I also saw a few white women who held signs that read "Europeans are the true undocumented."

This white guilt delusion is very sad and troubling. There is such a sad tendency in human nature to tend to shaming themselves, as long as they receive kind of notoriety in the process.

In order to ensure some peace and quiet on the premises, the LA County sheriff's deputies arrived on the scene early. One of the cruisers began emitting intermittent warnings to the public so that everyone was warned that peace officers and law enforcement were on the ground ready to act.

At about 6:20pm, the city hall opened up to let everyone in. The collection of people wandering into the city chambers was relatively peaceful. I spoke to one man who worked with special needs students. I thanked him for his service.

Our pro-America team found our seats, but within two minutes two of the Brown Supremacists started shouting at one of our members, Mike McGetrick. Following right after them, a camera crew followed up and started recording. The large one in blue was shouting so heedlessly, that he looked like he was going to have a stroke. The younger one kept going on and on about "Go back to Europe." McGetrick simply shouted back "I'm going nowhere!"

Harim Uzziel showed up a few minutes after, and already he was confronting the hatemongers. The abuse which that man has taken on is beyond the reach of many. Latinos for Trump face double discrimination, and it’s just wrong. Elsa Aldeguer, born in El Salvador but a full-fledged and proud US Senate, also arrived. She was unafraid to call out the corrupt city council.

Speaking of the city council, only three members showed up: Jack Guerrero, Cristian Hernandez, and Baru Sanchez. Unbelievable. Guerrero immediately called out his colleagues for not show up. Routinely, the city council meetings would feature three or four of the city council members. What is wrong with those little children? Do they not have any integrity or sense of responsibility?

After the reading of the pledge of allegiance, a presentation followed. Three students completed a project which focused on quality of life issues including abandoned homes and illegal squatters. Really? One would think that enough people would connect the degradation of the city's streets and businesses with the sanctuary city policy and the cartels. It was too amusing for me to listen to the students itemize all the issues in the city, only to see how the corruption and the collusion with illegal aliens and La Raza had contributed to the destructive undermining of the once quaint and quiet working class city.

Then Councilman Guerrero rose up, and announced that since he had given the other two colleagues ample time to arrive, that he had also given city staff enough time to explain their absence. Since there was no answer, Guerrero left the meeting and ended the quorum. 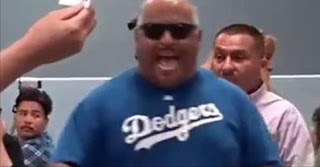 Immediately, I went after the Brown Supremacists and blamed them for bringing the unrest and chaos to the city council chambers. They were deservedly alarmed about being called out for their abusive behavior. They started shouting at me, but I kept directing my upset to the two remaining city councilmembers Hernandez and Sanchez, who have gone along with the same destructive and backward lies of Chris Garcia, his Chicano agenda, and the sanctuary city policy putting the taxpaying citizens at risk.

Then it got really heated. Some of the La Raza nativists surrounded Harim. One of them tried to steal his hat. The sheriff's deputy rushed him out of the building right away. The rest of the crowd started cheering, as though they had achieved some kind of victory. Then the large racist in a blue shirt started shouting "Get out of Cudahy!"

The shouting and whooping rose higher and higher in the park region outside of the hall.

Then the antifa goon punched Cyrus in the face three times. Joseph Turner and other people ran to subdue the thug and protect Cyrus. While the large crowd of illegal aliens, their supporters, and the Brown Supremacists started shouting their approval for this chaos and unacceptable behavior, the patriots trying to restore order and respect for the country stood back and exposed to the world the incredible insanity and anti-American hatred of this crowd.

One of the senior sheriff's officers kept pushing me back, but I finally stood my ground. "I have done nothing wrong! Why do I have to leave?" The sheriff explained to me that he had to quell the rioting that was about to break out. More deputies rushed to the scene to ensure that violence did not spread out into the city. The out of nowhere darted a "ghetto bird", aka a police helicopter which announced to the near-riotous crowd that the needed to leave the area, as they were forming an unlawful assembly.

Finally, the hateful anti-American bigots and the racist Brown Supremacists were forced to leave. The deputies informed us that they would help us drive out of the area. Dean Cilva drove by in his truck while creepy Naui recorded him. It was suite ridiculous, and I started shouting at Naui "Racists, go home!"

Then a group of women and a young child--the brainwashed 12 year old who had called We the People Rising "White Supremacy [sic]"--started shouting ¡Afuera! My response? I shouted it right back at them!

"It's over! Your hatred is over. Your disruption and disregard of the rule of law is over. This chaos cannot continue. This will keep going as long as Cudahy remains a sanctuary city!"

Finally, one of the deputies ordered for me to get into my car. Mark and I jumped in, then the peace officers created a pathway for us to get out. The creepy crowd of lawless Cudahy residents gathered around my car, trying to prevent us from getting out of the parking light. I insisted on driving through, and finally the deputies went to the front and forced them to get out of the way.

Then off we went.

For the next two hours, I connected with every member of our team, to ensure that everyone of them was safe. They were fine, but everyone was concerned about Harim, since video clips has shown the sheriff's deputies putting them in the back of a police vehicle and taking him away. Rumors abounded that he had been arrested or detained for some kind of wrongdoing. The truth is ... they were safeguarding him as they escorted him to a safe space.

Later that evening, the local Spanish language television station reported on the shouting matches and the altercations which followed at the Cudahy city council meeting:

This chaos erupted because of the violent Brown Supremacists and their enablers.

The corrupt, lazy city council members who refused to attend the meeting also shoulder the blame, since they have routinely missed city council meeting without a just explanation. There is simply no excuse for their chronic absenteeism.

Jack Guerrero has refused to hold the meeting together and pick up after his lackadaisical colleagues.

But the root causes for all the commotion and distress in Cudahy stems from two things:

1. Corruption, which in turn has gotten significantly worse because of

2. Illegal immigration, made worse because of the sanctuary city policy enacted by Chris Garcia and his corrupt colleagues. 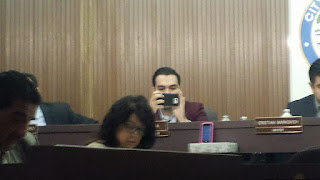 The two problems go hand in hand, as Mexican drug cartels and crime rings work with corrupt politicians to solidify their power at the expense of the hardworking, taxpaying residents of Cudahy.

The misuse of public funds, the disregard for the public infrastructure, the waste and fraud, and the politicized pandering on illegal immigration--all have upended the city into the current devolved failures. 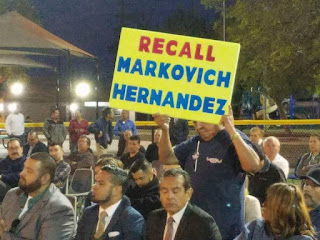 The crisis of leadership falls on newly-installed Chris Garcia. He has refused to lead, but has rather chosen to condemn the city and its residents to four years of failure under his cowardly lack of skills, maturity, wisdom, and character. Residents in the city have shared how betrayed they feel because of Chris Garcia. They thought that he with Cristian Hernandez, Baru Sanchez, and Cristian Markovich would bring better governance to Cudahy. Instead, they have simply proven to be the same kind of corruption, just with a different, younger face.

This hatred of our nation's laws and morals must cease.

It's time to Fight for Cudahy and restore liberty and truth to this city! 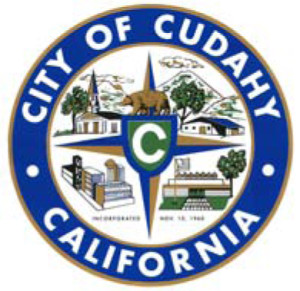 Posted by Arthur Christopher Schaper at 12:09 AM