You see, taxpaying residents in the city of Torrance were furious when they learned that Mayor Furey was fined $35,000 for colluding with the McCormick PAC.

And who was the campaign manager explicitly colluding in this perverse transaction?

We the People pushed hard to have Little Pat removed from the Torrance Traffic Commission--and he resigned in disgrace before the city council pushed to formally have him removed.

Of course, he still hasn't gotten over it.

Check out what he posted about me after The Daily Breeze reported (belatedly) about the Beach Cities Republicans' charter revocation: 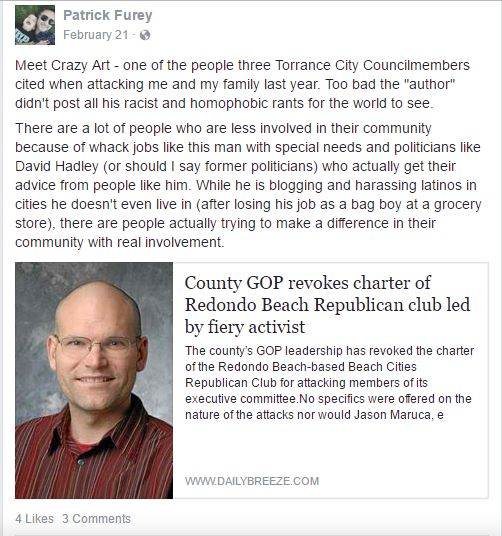 Here's the text of his fuming Facebook post:
Meet Crazy Art - one of the people three Torrance City Councilmembers cited when attacking me and my family last year. Too bad the "author" didn't post all his racist and homophobic rants for the world to see.

Who else complained about me? Which city councilmembers? I do not recall. I do know that the city council was ready to throw him off the commission for his corruption and unethical behavior.
Check out the video to see what we did:

There are a lot of people who are less involved in their community because of whack jobs like this man with special needs and politicians like David Hadley (or should I say former politicians) who actually get their advice from people like him. While he is blogging and harassing latinos in cities he doesn't even live in (after losing his job as a bag boy at a grocery store), there are people actually trying to make a difference in their community with real involvement.

David Hadley a whack job?! Now that's a good one!

Then he claims that people are making a difference in their community--but he had written that there are people who are "less involved."

What else can we call this? A very clear case of "Schaper Derangement Syndrome"!
Posted by Arthur Christopher Schaper at 2:12 PM