Over the past three weeks, I have been receiving emails, calls, and Facebook messages about the upcoming American Freedom Alliance (AFA) Dinner on May 21st.

Here is the flyer for the event,

I applaud the ideas and the reasons for AFA. 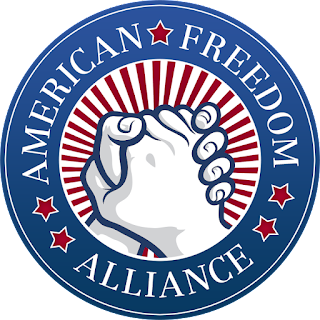 I think it is both necessary and proper, beneficial and essential, to re-educate Americans about liberty and the Common Law, Classical Liberal traditions of this country. I also believe that every able adult must teach their children, and other people's children, about the fundamental Judeo-Christian values and Western thought.

All of these previous principles are under attack in our country.

Avi Davis, the Founder of the American Freedom Alliance, was a larger-than-life kind of man. I met him briefly at the 2015 AFA awards dinner.

At the same time, I was becoming more physically involved in fighting for Judeo-Christian values, in fighting for Western Culture. In my discussions with other activist leaders, I realized that many of these types of high-celebrity associations and meetings are more of an echo chamber than an army. Of course, there is nothing wrong with raising money to host seminars and discussions to make people aware of the unprecedented attacks against our way of life and our individual liberties.

But at the 2016 AFA dinner, I found the meeting somewhat boring. Then again, I imagine many people would find a gathering a little uninteresting if they were not receiving an award. Many of the speakers that year talked about who the Western World is facing decline and probably won't bounce back. Perhaps Avi's sudden passing contributed to the malaise in the room that night.

I ended up leaving a little earlier, especially when one of the attending members at the meeting, Gary Aminoff, pressured me to allow a liberal-leaning Republican to speak at the Beach Cities Republicans. It bothered me a little at first, but at the time I was not aware of the corruption eating away the Republican Party of Los Angeles County.

I was a little disheartened by everything, but also frustrated by the fact that I saw a lot of wealthy and well-connceted people at this event. What are they doing to advance the cause of fighting nihilism, socialism, secularism, and Islan?

A very good friend of mine wanted me to be his VIP guest. I was looking forward to it.

But then I noticed the person whom they were honoring as a fighter for freedom of conscience: 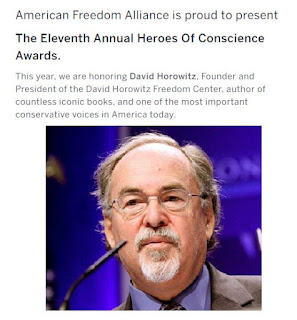 Sorry, but David is no freedom fighter.

This man has bowed down to the Big Gay Hate Machine.

He is pro-gay marriage and pro-choice.

That is not liberty. This basis cannot be the strong foundation for a free society. I used to write for Truth Revolt, David Horowitz news center. It was a dud. They stopped paying their top-rated writers, including Ben Shapiro and Kurt Schlicter.

The new editor was very coy about the standards which Truth Revolt would abide by. I wrote articles going after what the destructive LGBT agenda was doing to our Western Culture, especially the attacks on biological evidence as well as natural rights.

They refused to print my articles. The editor even told me that Horowitz did not believe those fights were worth fighting. Unbelievable. I have little respect for this social liberal. He does not deserve the award.

There is no liberty without life, and there is no liberty with inculcating principles in line with moral truth and theological revelation. Otherwise, liberty quickly devolves into license and then slavery to self. Liberty is all about the reduction and removal of arbitrary restraint, so much more than "do whatever you want." After all, choices lead to a limitation on choices, but those limitations should come as a result of free choice, not imposed will.

Then I noticed who sits on the board of the American Freedom Alliance: 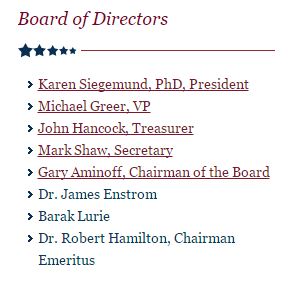 Nothing. It looks as if she went along with the same corrupted program. I was so disappointed.

And notice who is Chairman of the Board?

Do I want to work with and fund a program which has such traitors and unjust persons?

Other people who have attended previous AFA dinners? This Aminoff guy, who has been threatening other conservative leaders, is the Chairman of the Board? I am already sick to my stomach.

Who else has been attending these AFA Dinners?

Mark Vafiades, another member of the corrupt RINO-PLAC executive committee who had the Beach Cities Republicans Charter revoked:


Reminder: The RPLAC Central Committee revoker the charter for the pro-Western, pro-Judeo-Christian values GOP club the Beach Cities Republicans earlier this year (January 13, 2017). Now they want to present to the world this unified front that they care about fighting for freedom and fundamental values?

I don't think so!

This is all wrong! This conflict is about so much more than personalities. The problem for me is the rank hypocrisy! They want to celebrate Western values, but the board members actively UNDERMINE the very thing they claim to celebrate!

And the corrosive connections between RINO-PLAC leaders and AFA only get tighter:

They seem to be very close to easch other. Along the same street, within one block of each other.

So, with that, ladies and gentleman, I will not be attending the 2017 AFA dinner. The fight for liberty, for Western culture, for Judeo-Christian values depends on earnest, principled leaders.

Here are the following reasons, in succinct order:

1. They are a social club more than an activist group dedicated to getting things done.
2. This year, the AFA is honoring the pro-LGBT David Horowitz, who in turn has actually been afraid to stand up to the destructive LGBT  Agenda, which despises Liberty, God, Biblical principles, and the Truth.
3. The current leadership and key attendees to these dinners are the same corrupt RPLAC members who revoked the charter for the freedom fighting Beach Cities Republicans.

Currently, Avi Davis' blessed legacy does not have such leadership and deserves better. Let's stand for truth and fight for what is right.

And let us not be afraid to call out the hatred, the falsehood, and the lies of those who are more interested in filling up their socia calendar rather than doing something good for God, for Country and for Constitution.