Mexica Movement Bigot Total Hyprocrite: Naui Blasts GoFundMe Accounts--But Has One of His OWN!

Naui Ocelotl Huitzilopochtli has been going after a Trump supporter named Harim Uzziel for the last four months.

Here are two YouTube videos in which Naui is asking for people to donate ... to his GoFundMe:

Where are the videos of Naui's trip to North Dakota to stop that dreaded pipeline?

Check out his YouTube channel, and there is no video between his last plea for money and the next video:

Why does he go after Harim Uzziel for his GoFundMe account? 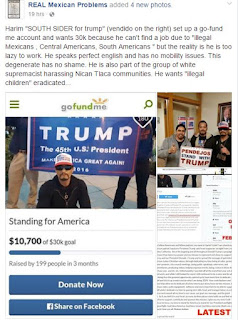 Naui, Naui -- Why are you such a hypocrite?