The top vote-getter was Laura Herrera, who is running for Huntington Park City Council.

The Number Two vote getter (and I meaan #2 in every way) was Huntington Park City Councilwoman Karina Macias.

She was a DISTANT second according to the final tally.

Macias has been spending big money on flyers.

Not a good sign for an incumbent city councilwoman who wants to get reelected.

Now, check out these photos at the installation meeting for that Central Committee: 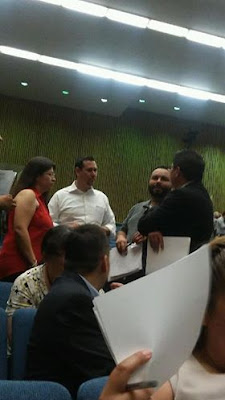 There we have Efren "Chuck Cheese" Martinez, the puppet-master of the four Corruptitos.

He owns that committee. That's what is happening.

Republicans have only begun waking up to the necessary influence of these committees. Democrats have understood for years how these voting blocs, which recruit, endorse, and fundraise candidates, wield an inordinate amount of power.

Martinez is buying up influence with his PAC money from his aborted assembly race for the 59th.

And look who else was there ... 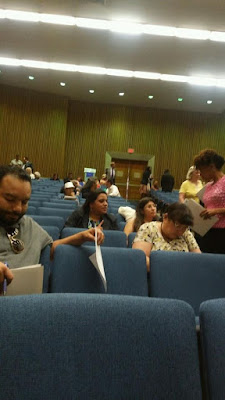 The whole thing is just sickening.

These ratas con cuatro patas must be exterminated.

The vermin can and will be chased out of Huntington Park!

The Democratic Central committees in Southeast LA County are a cauldron of conflict and corruption.

They need to be emptied out and cleansed thoroughly.

Another source has confirmed what I had feared.

This Democratic Central Committee meeting took place at Kenneth Hahn Hall, where the Board of Supervisors meets!

This is a massive abuse of public funds! OUTRAGEOUS!
Posted by Arthur Christopher Schaper at 11:22 PM