The economic and culture wars abound in the state of California.

State Senator Ricardo Lara wants to attack the First Amendment on all five of its points.

Mark Leno and company are waging war on businesses, forcing the minimum wage up to $15 an hour by 2022, and with that destructive maneuver, they are forcing out young people, particularly minorities, from the precarious job market. 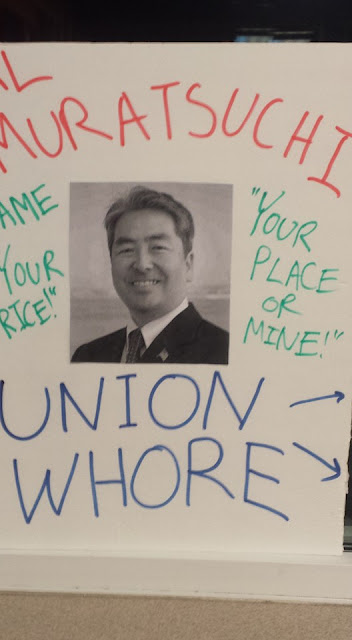 How about Gun-Apocalypse, which just criminalized the legal purchase and acquisition of a firearm in greater measure than before? Thanks Governor Moonbeam.

On one issue, however, voters from the left or the right have growing consensus: the destructive impact of Big Labor in the Golden State.

Labor unions are actively buying up influence among Democrats (mostly) and Republicans (to a much smaller extent).

Unions loves unions, they do not care about their workers, and they are hurting students, parents, consumers, businesses, and everyone else in this state who contributes rather than confiscates wealth, resources, and opportunity.

Whatever we may think of liberal Republicans, many of them are standing up to the arrogant, overbearing syndicates which are pushing out the middle and working classes. A new aristocracy of public employees has taken hold in California. Elected officials and commissioners are raking in six figure salaries--in retirement--and we the people are expected to pay for this elitist redistribution of wealth.

Historically, this economic tyranny is nothing new. The ignoble nobility of the French aristocracy lived off lavish pensions, paid off by struggling laborers and artisans for decades. Then marched in the French Revolution.

Let's not forget the numerous times that the teachers' unions have run to the rescue of the worst, most reprobate teachers, even those who had sexually assaulted students. School districts could not fire them because of the ironclad tenure laws, negotiated in greater measure by teachers unions.

Even private sector unions are facing greater privation. Why? Because their anti-free market policies are hurting the very businesses they rely on for employment.

More union members, forced to join and forced to pay, are tired of watching the labor leaders make six figure salaries, but their opportunities for better employment whither away. Hours get cut, and the worst employees never get disciplined or fired.

Let's not forget the disdainful, destructive behavior of the ILWU. They shut down the ports time and again, like a group of selfish, petulant middle schoolers who can't stand not getting their way. Why does any one group retain the power to disrupt commerce at the expense of everyone else?

These labor unions need a punch in the nose, not another thousand dollars, or easy politicians who will bend and weave for their every whim.

So, for Election 2016, the candidates whom California voters should reject are those paid for, bought and sold by major labor unions, particularly the public sector lobbies.

And who fits that destructive description in the South Bay contest for the 66th Assembly District?

Critics properly countered that Muratsuchi was a union puppet, and they bought him a seat in 2012 so that he could warm it up and keep their big money rolling in.

Al Muratsuchi is sleeping with every labor union in California.

What a whore! They pay him big money, and he does whatever they tell him to.

You can be sure he will be turning tricks for the unions in Sacramento, if elected. 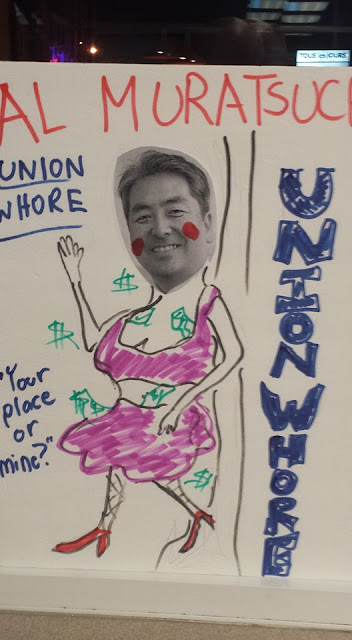 Do we really want another special interest prostitute, a hussy who will bump and grind for lobbyists and big government insiders who look out for themselves and their administrators, and not even for their members?