California MassResistance is building up the fight against SB 1146.

We are reaching out to assembly and state senate candidates.

We are encouraging churches, charities, small businesses, students, parents, civic leaders to stake their claims and take a stand for individual liberty.

One of the main institutions fighting against this legislation is Biola University.

This Christian college is located in La Mirada, California. 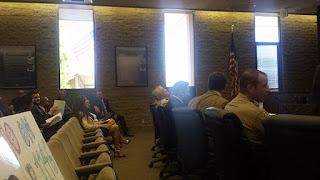 I visited the city council that day, in order to give a statement in opposition to SB 1146, to demand that Assembly Majority Leader Ian Calderon (who represents La Mirada) stop the bill in committee.

Despite my hectic workday, and the challenges of driving from the South Bay to the edge of Los Angeles County, I arrived at the La Mirada City Council meeting in time.

A few pastors had also arrived, and it looked as if some of them were interested in speaking out against SB 1146. 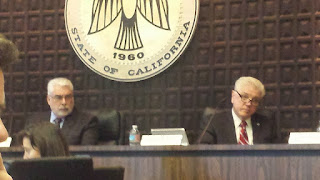 I was surprised that I did not have to submit a speaker card for public comment.

I gave extended remarks about SB 1146.

After public comment, the mayor informed me that they were sending a letter of opposition to state senator Ricardo Lara's bill.

Another resident, the father of La Mirada Councilman Andrew Sarega, commented about SB 1146.

He had just returned from a one-month trip to his home country, Romania, where the country had just added a constitutional amendment enshrining marriage as an institution between one man and one woman.

Incredible! This move is particularly striking, since the vast majority of countries in the European Union have caved on this issue and recognize a radical redefinition of marriage.

After the very short city council meeting, Councilman Sarega sat down with me and explained his staunch opposition to SB 1146, as well as his firm support for Christian principles, natural marriage, and individual liberty.


Listen to his remarks here.

I spoke with another councilman after the very short city council meeting,

He told me that he had not even heard about SB 1146, then mentioned the emails he had been receiving in support and opposition to the bill.

This is an all Republican city council, and yet there is little leadership to do something vivid and severe to stop SB 1146.

A letter of protest is nice, but the city council should be reaching out to all the voters and community leaders. especially those invested in the long-term well-being of the city.

How could any of these councilmembers not be aware of this terrible legislation? Biola's own president Barry Corey has been contacting donors, parents, everyone invested in the integrity of Biola.

What is everyone so afraid of? Why won't more elected officials step up and push back against the abusive LGBT bullies in California?

More people need to know about this terrible bill, and need to vote against it!