Assemblyman Santiago has been making visits to Huntington Park as well as other key parts of his assembly district.

He gave Nick the Greek a nice picture and a proclamation, and yet nothing else happened to help Nick get out of his financial straits.

The city of Huntington Park is still being overrun with corruption, malfeasance, waste, and street crime.

Why is he spending time going after people's guns, when individual residents need more liberty to protect themselves, not less?

How many of the police departments in the region are understaffed and overworked?

And how about that Huntington Park City Council?

One of the most corrupt and immature legislative bodies I have ever seen!

Assemblyman Santiago, where are you?

You need to confront the corrupt city council in Huntington Park.

You need to stand up to the Democratic Party in your area.

You need to stand up for your residents and your community.

He is doing everything in his power to ruin the great state of California.

He is turning the Golden State into a tarnished Sanctuary for illegal aliens.

How many more American citizens will have to die before you and your colleagues in Sacramento take the rule of law seriously?

How many more of our freedoms have to be attacked or taken away before you do something about it?

The latest bill coming out of Corruptito Ricardo Lara would all but erase First Amendment Freedoms here in California.

SB 1146 is bigotry writ large. How many colleges will be forced to close because they would be bullied into allowing men into women's locker rooms, or being forced to accommodate same-sex marriages, or bull-dozed into teaching the Regressive Left's views on gender, life, and family? 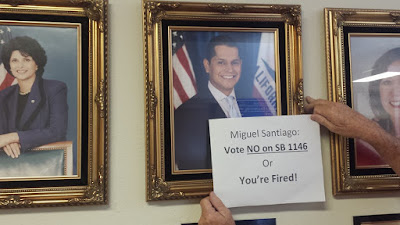 Assemblyman Miguel Santiago, you need to vote against SB 1146 in committee and make sure that it dies, or your job is going to perish!!!!

To all the constituents of Miguel Santiago ---

Call his office and demand that he vote NO on SB 1146!