In a Massachusetts town: How parents are fighting – and winning – a brutal fight with school officials over aggressive LGBT middle school agenda.

Graphic library books. Staff persuading kids they are “transgender” while keeping parents in the dark. And more.

Most people have no idea how radical this agenda is – or of the contempt that school officials have for parents who disagree.  But with MassResistance’s help, these parents are succeeding.

(Part I of a multi-part series over the next several days.) 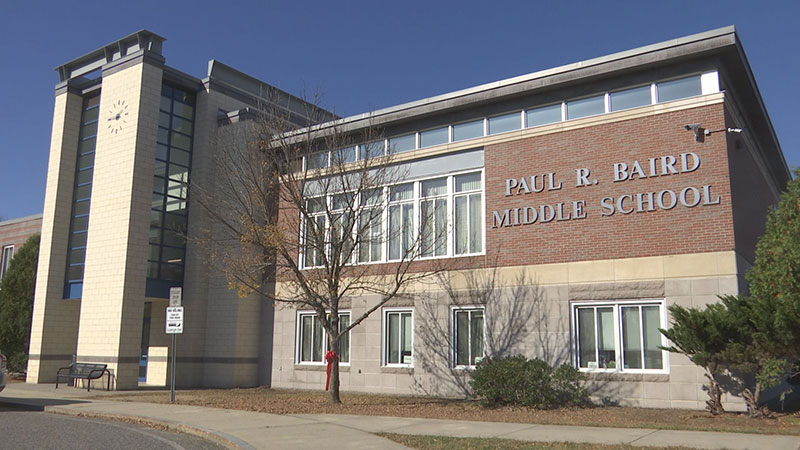 The Baird Middle School in Ludlow, MA, has become an unsafe place for parents to send their children.

Ludlow is a town of about 21,000 in central Massachusetts. The people are relatively conservative. It’s a tight community. Many of the families also speak Portuguese or Polish and have lived there for generations. People have always been happy to send their children to the local public schools.

But in late 2019, parents at the Baird Middle School (where the kids are ages 11-13) were shocked at the militant LGBT agenda they started seeing. The more they found out, the worse they realized it was.

Here we give a brief overview of what happened. In the upcoming installments we will include the shocking and outrageous details. It is important to realize just how depraved many school personnel are and how horrible their agenda is. And it’s frightening how viciously the school officials – from the School Board and Superintendent on down – behave toward parents who challenge this. But it’s also important to know that they can be beaten.

The school had hired a “transgender” school librarian (a weird woman who dressed as a man). Very graphic, explicit homosexual and transgender themed books appeared on the library shelves, and several were prominently displayed. Many of the books encouraged kids to experiment with LGBT behaviors, as well as other sexual activities. A teacher observed that a boy began fondling himself after reading one of the books during class. 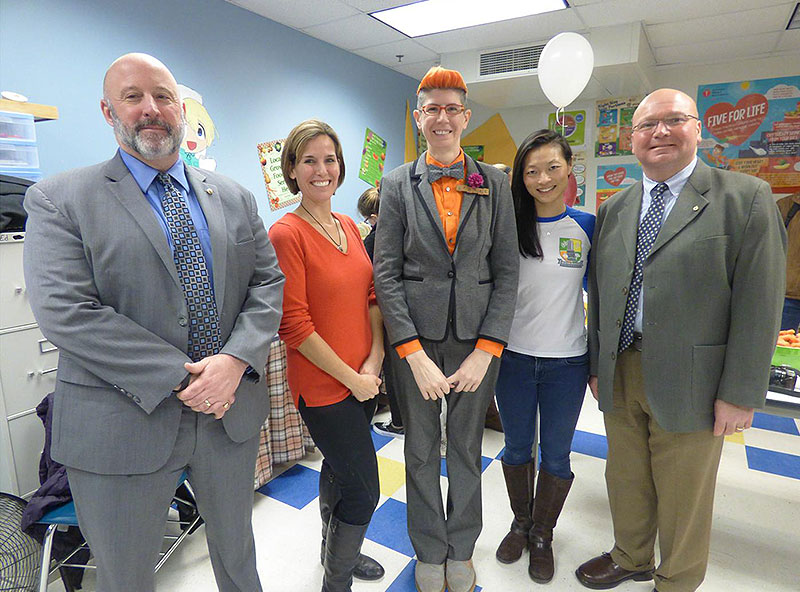 The school librarian, Jordan Funke (Center) poses with Ludlow Superintendent Todd Gazda (left) along with other staff and a consultant. (Both have now resigned!)

A group of parents began coming to School Board meetings to complain about the books. But they were treated harshly and disrespectfully. They were told they were interfering with “diversity.” They were handed a list of bureaucratic steps to follow if they wanted the officials to consider removing the books. But the Superintendent insisted that the books were completely appropriate.

At one point, the School Board moved their meeting to a gymnasium so that a crowd of local left-wing teachers and LGBT activists could come and intimidate the parents with vicious name-calling.

The Massachusetts chapter of American Library Association (ALA) even got involved, apparently at the instigation of the school librarian. They told the School Board that the books are “entirely appropriate” for fifth-graders, and warned the Board that removing the books would constitute an abridgement of the “intellectual freedom” of the children.

The teacher who stood up for parents

One of the teachers, a Christian, was a true hero. This woman revealed several of the books to the parents and helped them understand what the children were exposed to in the library. For doing that, other staff members harassed and tried to intimidate her. They even tried to press harassment charges against her. But she stood tall and would not cave in.

The teacher also revealed that there had been bizarre sexual posters put up just outside the school library, but they had been removed when it was feared that parents walking through the school might see them. 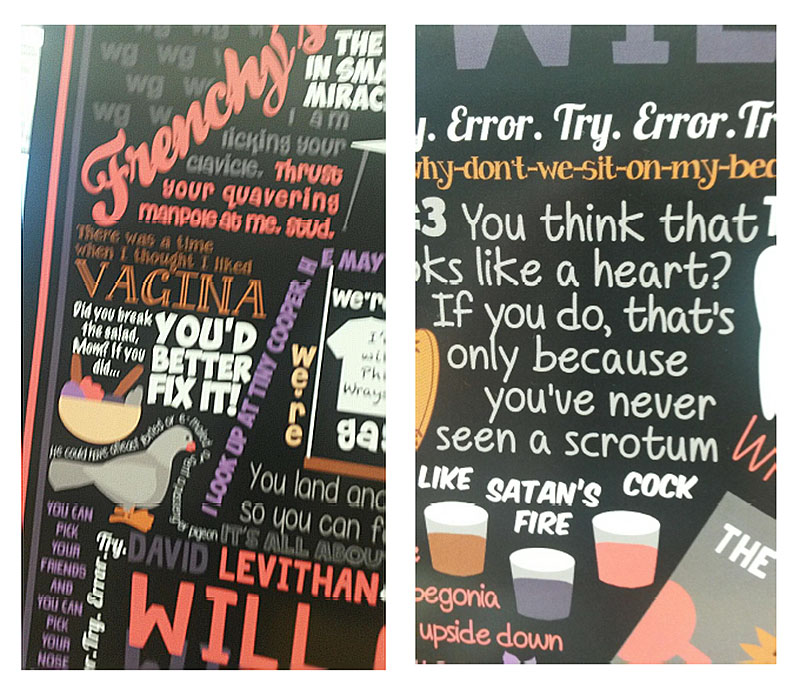 These are a few of the posters that were put up just outside of the Baird Middle School Library - apparently by the librarian - but were soon taken down. 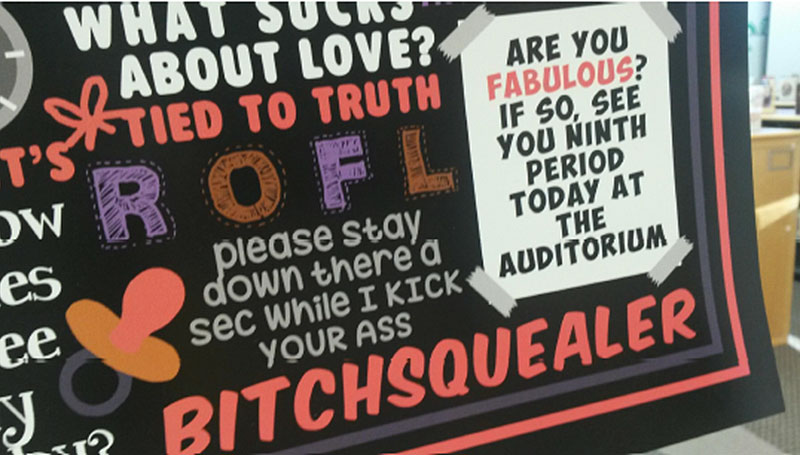 When COVID hit, parents found out that on days when students were allowed to go into the school, there were occasional strange pro-LGBT one-and-one sessions between school staff members and some of the more vulnerable kids. The kids were given pornography and links to “transgender” YouTube videos.

Teachers and counselors secretly began pushing the concept of “preferred pronouns” to the children (i.e., using “him” for a girl or “her” for a boy – or some other invented pronoun). From there, if a student “felt” like the opposite sex, the staff would persuade the child to use an opposite-sex name while in school. Other students and staff were also told to address the child by that name. All of this was purposely kept hidden from the child’s parents as well as other parents.

But thanks to that Christian teacher, parents were starting to find out. And they were outraged. That’s when they asked MassResistance to step in and help them. We began organizing them for action. Among other things, they began exposing this to other people in town and demanding that the perpetrators be fired.

When that teacher informed one of the fathers that both of his middle school children were now using opposite-sex names and receiving “transgender’ counseling in the school, he was livid. He confronted the school officials. At first they refused to meet with him and the mother, but finally they relented. (MassResistance accompanied him to a meeting with the Superintendent, who basically stonewalled and tried to defend the staff’s actions.)

But we helped the parents keep up the pressure. The outrage against the school intensified. (And the parent now has lawyers getting involved.)

In retaliation: The teacher is fired, and more

But the remaining school officials are angrier than ever. Before leaving, the Superintendent had the Christian teacher formally fired, which has incensed the parents even more. (She now has a lawyer!) And the School Board has started a vile salvo of invective against the parents, demeaning and degrading them (and MassResistance) before the community. What’s more, a small group of local leftist zealots is supporting the School Board by attacking the parents on social media.

The battle in Ludlow is continuing to boil. The parents will continue to pursue their goal to get the LGBT agenda out of the school – and the other ringleaders on the staff removed. The next few months are probably going to be ugly.

Next: The middle school library books