When Alex Villanueva announced his bid for LA County Sheriff, I did not support him. 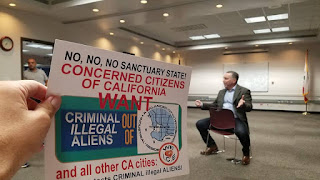 I wanted McDonnell to win re-election, because from the outset he opposed SB 54, the unconstitutional sanctuary state law which put illegal alien criminals ahead of law-abiding citizens. As the sheriff for the most populous county in the United States, McDonnell faced considerable blowback and headwinds for speaking out against the sanctuary state anarchy.

He met considerable hostility from left-wing activists, including La Raza militants and Brown nazis alike. He was unwavering in his opposition against such lawlessness. The state of California needs federal law enforcement officers in the jails to remove every foreign national who has violated our sovereignty. Illegal aliens have to go.

I confronted Villanueva on this issue. He actively campaigned on removing ICE from the jails.

Sadly, he was elected sheriff in 2018. I suspect that voter fraud, i.e. ballot harvesting played a huge role in that outcome.

So, we have had to suffer under his reign of error in regards to illegal immigration. He even went so far as to expand the number of crimes under which illegal aliens would not have to be deported from the county.

But now, fast forward two more years, and we see a Sheriff who is talking about law and order and taking on the political establishment in Los Angeles County.

He is speaking with news anchors on Fox News. He is talking about issuing massive numbers of Concealed Carry Weapons permits to Los Angeles County residents, when the previous sheriffs (Lee Baca and Jim McDonnell) refused to issue CCWs in the first place.

AND he is talking about cleaning up Venice Beach, taking on emergency powers to get rid of all the homeless who have migranted to California, to Venice Beach because they love the weather, the free government handouts, and lax law enforcement.

Villaneuve is calling out all the liberal politicians, from the Board of Supervisors to the Los Angeles City Council, for allowing this homeless invasion to metastisize in our communities.

Villanueva has sparked the ire of the very Democratic Party that lined up behind him in 2018, too. Check out this report:

LA CountyDemocrats call for Sheriff Villanueva to resign; his spokesman hits back

Only California Democrats would declare that enforcing the law, protecting public safety and health were part of a "radical agenda." This is absolute madness.

“Yesterday, Sheriff Alex Villanueva began solving the homeless problem on the Venice Boardwalk while simultaneously conducting the largest illegal drug bust operation in the history of the department,” said Capt. John Satterfield, a spokesman for the sheriff’s department.

This story is not getting enough attention, either. Pot farms have been sprouting all over Northern Los Angeles County. These illegal operations take water away from essential services and real businesses, like farming. People need to eat food, not smoke pot, to get through the day.

“Violent crime rates have nearly doubled, yet for some strange reason the radical left activist crowd has decided defunding the police is a good move.

They are rabid communists paid to spout their hateful nonsense. If everyday citizens and activists don't get busy, this will become the norm throughout Los Angeles County and the United States as a whole.

“The LACDP calling for the sheriff’s resignation is part of this radical agenda, evidence they have been hijacked by the far left, and a distraction. The sheriff will continue to remain focused on public safety, creating solutions and serving our communities.”

Anyone who wants to serve in law enforcement is supposed to ... enforce the law. That is something that Democrats are now militantly fighting with all their might.

The Los Angeles County Democratic Party Central Committee voted Tuesday night to call for Villanueva to resign, saying he has failed to rein in “long-standing problems within his department.”

There are still long-standing problems, but they are not going to be solved by endangering public safety further. When the Los Angeles County Board of Supervisors voted to cut $300 million from the department budget

The vote came 10 days before the first anniversary of the fatal shooting of 18-year-old Andres Guardado by a sheriff’s deputy in an unincorporated area near Gardena.

The Democrats should also talking about the shooting of a special needs adult in Cudahy. For some reason, the Left does not care about innocent people who get killed by the police. They only care when someone who was committing crimes gets killed by the police--and black suspects only, at that.

“Accountability has long been one of the foundations of democracy,” Los Angeles County Democratic Party Chair Mark Gonzalez said Tuesday. “As voters, we have an obligation to hold our leaders accountable for their actions, and as the Democratic Party, a responsibility to ensure that our elected officials are upholding our ideals and principles.

The Democratic Party of Los Angeles County has no ideals or principles, aside from lawlessness, disorder, and Cultural Marxism. How can anyone still support this terrible party anywhere in the state of California?

“Tonight, marking the one-year anniversary of the murder of Andres Guardado, Los Angeles Democrats stand in solidarity with the Guardado family, recognizing the systematic brutality of law enforcement that has continued to shake our county. Leadership and accountability starts at the top, and while strides have been made to reform police culture in Los Angeles, it’s simply not enough.

Will they stand in solidarity with Jamiel Shaw Jr? How about David Dorn? How about Conan Hinnant (oh, he does not count, since he was a white kid shot by a black man ...)

“Sheriff Villanueva has had multiple opportunities since his election to rein in long-standing problems within his department, which is why tonight, Los Angeles Democrats are holding him accountable and calling for his resignation.

“A failure to lead in Los Angeles is a failure to serve Los Angeles. We will continue to hold those accountable who fail to live up to their obligations.”

The Democratic Party of Los Angeles County needs to be defunded and disbanded. They are a terrorist organization all unto themselves.

The Los Angeles County Democratic Party Central Committee endorsed Villanueva in his 2018 race against then-Sheriff Jim McDonnell, helping him become the first Democrat to win the nonpartisan office in 138 years.

Again, hell is freezing over. We have the Sheriff of Los Angeles County taking on his own party and actually doing his job.

He refused to enforce the onerous lockdown orders from Governor Gavin Newsom.

In fact, he refused to enforce the statewide beach closures in Los Angeles County, too, on Independence Day! Happy Fourth of July!

He has continued to post the release dates of every convict in the LA County jails, even though left-wing activists wanted this practice to stop so that illegal alien criminals could wander back into LA County streets and cause more harm and havoc.

He stood up to the regressive, leftist LA County Board of Supervisors and ensured that not one sheriff's deputy was laid off, even after the board voted to cut his budget by $300 million.

He has gone on national television calling out the corrupt, lawless, dystopian governance in Los Angeles County.

He has pledged to remove all the homeless from Venice.

He has signed off on the recall petition to remove pro-criminal, anti-victim LA County District Attorney George Gascon.

He is even releasing the names of deputies in officer-involved shootings. 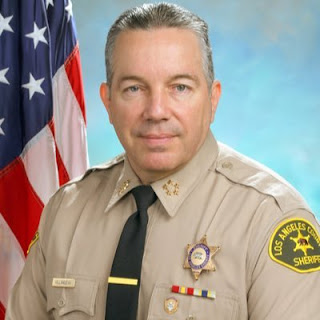