In the meantime, I did a great deal of reading and writing on campus. I was always researching, visiting the stacks in the main library. For a number of months, I would do the basic coursework for earning the credential, and then I would look over the numerous books that I had borrowed. One could say I was a voracious reader!

My credential advisor at the time was Arlene Lazarowitz.

I will be sharing more information about her shortly.

Now, the interesting story that I wanted to share about my time at Cal State Long Beach has to do with the infamous Kevin MacDonald!

He was a tenured faculty member at Cal State Long Beach, a social scientist and evolutionary psychologist who conducted considerable research into Jews, Judaism, and Western politics and philosophy. He wrote a trio of books on the subject, the most incendiary of which was entitled: 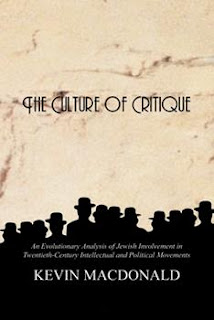 The whole title was actually:

The Culture of Critique : An Evolutionary Analysis of Jewish Involvement in Twentieth-Century Intellectual and Political Movements

In this book, Kevin MacDonald argues that Jews in the United States and in other countries pursue values and policy goals to promote their own interests, often at the expense of the home countries which they live in. He further makes the argument that the left-wing zeitgeisten that has become commonplace in the United States and throughout the West is a result of Jewish academics and activists pushing their so-called anti-West, anti-White agenda.

MacDonald asserts that it's the Jews' fault that mass immigration has become a point of great contention in the United States, and that demographic changes are becoming considerable in the United States. He argues that Jewish activists started and promoted the NAACP. He focuses narrowly that they lead to the end of Darwinist theory in the social sciences, which gave rise to the multiculturalism movement and the argument that all cultures--traditions, values, habits--are equal, and equally estimable. This movement, he asserts, is a result of Jewish academics pushing their own self-interest to undermine the so-called ethnically "white" majorities in the Western World while promoting themselves and their interests into the seats of power.

He ultimately argues that Jews are pushing this agenda all at the expense of Europeans and their descendants, i.e. Jews are hurting white people.

MacDonald's assertions were blunt, blustery, controversial to say the least. Most importantly, they are false. His views are clearly, and he admits it unabashedly, anti-Semitic. He has openly decried the attacks on "White people" and one can basically reduce his moral worldview to "It's the Jooz' Fault!"

I cannot speak too charitably about his delusional thinking. It is really offensive!

I started hearing about this guy while I was earning my teaching credential at Cal State Long Beach in 2004. MacDonald would retire in 2006, so he was still technically active as an academic, a tenured faculty member on campus while I was getting my credential.

MacDonald's research received scant attention from other academics for decades after it was published. Professor Steve Pinker, for example, dismissed MacDonald's work as not worthy of any serious academic inquiry. However, such disregard has not prevented his ideas from getting promotion from certain political operatives in the United States. In the last five years, Alt-Right proponents have taken K-Mac's research (his supporters call him "K-Mac" as a term of endearment) and promoted his ideas for the last five years. During the Charlottesville rally turned riot in 2017, for example, the chants of the white supremacists, white nationalists, and neo-nazis included "Jews will not replace us!" Where does this conspiracy theory come from?

The Culture of Critique.

The pernicious lies of this crank academic are getting more mainstream. It's time to do more than just stand by and say "His ideas don't matter." They require contention, confrontation, and correction.

For this reason, plus the fact that anti-Semitism is becoming more chic among younger so-called "conservatives" and college students in general for their overheated, baseless hatred of Israel and championing of the so-called Palestinian territories, I have been very alarmed about this trend and have wanted to combat it. For the last few weeks, I found myself engaging with Groypers, bigots, and other white nationalists on Gab, who routinely attack me for speaking out against Anti-Semitism and denouncing this false narrative that the Jews are the problem in our culture and our country.

Barely two years ago, I remember eating breakfast at a local McDonald's, and I started up a conversation with a guy who was eating with a passing acquaintance. Out of nowhere, this guy just blurted out to me: "Did you know that the Jews were behind 9-11?"

I nearly burst out laughing, the statement was so ludicrous. Then a creepy sense of unease washed over me. Then I started probing him on this issue, asking him to prove his assertion, which he clearly could not do. I then denounced his remarks and walked away.

It's shocking that such heinous, delusional anti-Semitism still lingers in the world, even in the United States, and even here in supposedly progressive, tolerant, and accepting Southern California.

So, getting back to Cal State Long Beach ...

I mentioned that MacDonald was still a tenured faculty member at Cal State Long Beach while I was earning my teaching credential. I also mentiomned  my Second Teaching Credential advisor Arlene Lazarowitz:

She had quite a reputation on campus. She was tough, loud, brooked no argument from students when they tried to turn research papers in late. She was the most ostentatiously Jewish person one could possibly imagine,too (and that's not an insult)! She was unapologetically liberal, with a very strong New York time accent (even though she was born in Canada. Go figure!). During her classes, she sometimes mentioned going to synagogue every Saturday with her colleagues. In short, she was very open about her Jewish identity. In fact, she was the Director of the Jewish Studies Program at the University!

Certainly, she would fit into the nefarious profile of "The Jews" that Kevin MacDonald had repeatedly argued in his book. He claimed many times over that Jews and Judaism operate based on an evolutionary strategy to promote their own interests while undermining the interests of gentile populations around them. They even go out of their way to suppress anti-Semitism via these same subversive, coercive methods.

If any of MacDonald's conclusions were actually true, one would think that the outspoken Jewish academic and activist Dr. Lazarowitz would have gone out of her way to fight back, suppress, and "cancel" MacDonald's research or end his tenure.

But on the contrary, Lazarowitz SUPPORTED his academic freedom!

Check out her statement in this edition of the Cal State Long Beach student newspaper:

Arlene Lazarowitz, the director of the Jewish studies program at CSULB, said that while she does not agree with many of MacDonald’s conclusions and that they are too subjective, she is happy that CSULB allows its faculty to think and publish freely without the threat of censorship.

In a debate about the validity of MacDonald’s research by members of the College of Liberal Arts it was determined that the tenured professor did not teach any of his research in the classroom and therefore was entitled to publish his research.

Lazarowitz added that instead of censorship, the best response to MacDonald’s research is to prove it wrong.

When I first read this account in the student newspaper, I was really surprised and thrilled to see this kind of openness in academic inquiry. One would think that she would have gone out of her way to suppress and shut down MacDonald's research, discredit his professional career, and even get him fired.

The further irony, when I remembered this, was that her very stance in favor of academic freedom further undermined MacDonald's noxious thesis! Jews are not operating to promote their own interests at the expense of their home country at all. In fact, Lazarowitz was defending and celebrating the university's atmosphere of free inquiry! One would think that if there were any truth to what MacDonald had asserted in The Culture of Critique, there would have been some effort by Jewish groups on campus to get MacDonald removed, and Lazarowitz would have been leading the effort.

That is precisely what did NOT happen. This anecdote has come and gone in my memory over the last few weeks, and it's particularly noteworthy for me since I was there in the midst of this controversy, although it impacted my only tangentially at best.

Today, I am sharing this story to fight back against the corrupt, corrosive lies of Anti-Semitism, which are becoming more popular on social media and in academia, and which need to be challenged, debated and debunked, as Dr. Lazarowitz had asserted nearly twenty years ago.