If conservatives fear that Donald Trump is an enfant terrible, then they haven’t been paying attention to their sprawling, engaged coalition of Republican governors for very long.

There’s already a true red conservative in blue New England who gets headlines (sometimes) for the wrong reasons, but deserves credit for substantial reforms on tax cuts, improvement of the state business climate, expansion of Second Amendment rights, and heightened state security. 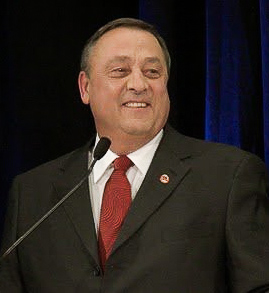 I am talking about Maine Governor Paul Richard Le Page.

I love this guy. He campaigned on a message of ending bureaucratic entanglements, bringing back jobs, and telling President Obama to “Go to hell!” Once elected, he told off the NAACP when they shamed him for not attending one of their events: “Tell ‘em to kiss my butt!”

LePage won his first term on a slim, five-way plurality. The second time around, he gathered more support. I have been a fan of his since the day he announced his bid for Governor. When I wrote a review on the governor last year (Maine’s Paul LePage: Conservative Kicking Butt), his one-liners alone merited his election. Fellow conservatives in California admitted to ne that they had never heard of him. Yes, this praise is strange coming from a conservative in a cozy, crime-free section of Los Angeles California, but Governor LePage’s commands a bravery—and bravado—which should be celebrated on a national scale.

Even though he has never worked with an entirely Republican legislation in the blue state of Maine, LePage has signed off on tax cuts, welfare reform, and shall-issue for concealed-carry weapons permits.

Then I read the latest headlines that Governor LePage was stepping down.

Evidently, LePage made it into the news (again) for conspicuous reasons.

“Mr. Gattine, this is Gov. Paul Richard LePage,” a recording of the governor’s phone message says. “I would like to talk to you about your comments about my being a racist, you (expletive). I want to talk to you. I want you to prove that I’m a racist. I’ve spent my life helping black people and you little son-of-a-bitch, socialist (expletive). You … I need you to, just friggin. I want you to record this and make it public because I am after you. Thank you.”

Of course, the governor let off more steam, admitting the he wished he could challenge Gattine to a duel and shoot him “right between the eyes.”

First of all, a little context.

The lawmaker allegedly asserted that the governor was a racist because of his welfare reform policies.

What does welfare reform have to do with racism? That’s a racist assertion, connecting welfare use (and abuse) with certain people.

Gattine has since disputed the claim that he called LePage a racist.

Second of all … LePage’s tirade was offensive.

To his credit, LePage has pushed the limits of political incorrectness, especially on race.
This is a discussion executives need to tackle, especially in New England, where drug dealing has eroded a once vibrant region of the country. Lest we forget, the retiring Governor Peter Shumlin of Vermont spent the greater part of his State of the State speech discussing the heroin epidemic devastating his own state.

Who is doing most of the dealing? If the criminal element is mostly black or Hispanic, then every state government should investigate the underlying reasons. Is it just race, or are class and cultural elements involved—as is often the case?

Most people are not aware of the New England opioid epidemic, which is ravaging Maine, too. Despite some insensitive remarks about the ethnic background of these evil drug pushers, LePage rightly challenged the press for not exposing this deep problem.

No matter how justified his anger, LePage should not have left that abusive message.
The governor lost his temper, and his statements were patently unacceptable. 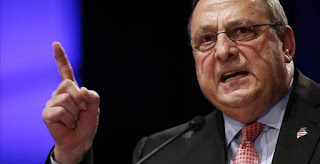 But public pressure has mounted for the governor’s resignation.

A recent Townhall.com article suggested he might do just that:

My response: He has not lost his ability to serve the Maine community.

Jobs are growing in the Pine Tree State. Check this index for proof.

Maine has languished in economic stagnation for years, until recently.

Maine has long been one of the freest states in the country personally and one of the least free economically—the opposite of Alabama. Since 2009, however, the state has gradually improved on economic freedom.

LePage was elected in 2010. Correlation perhaps?

The governor has been an asset, not a liability for Maine and for the country.

His bold stance on issues, coupled with his rags-to-riches upbringing, command respect and should inspire emulation.

Within minutes of hearing of a possible resignation, I contacted the Maine Republican Party and told them to stand by their man.

An hour later, LePage informed the public that he’s staying.

LePage needs to watch his mouth. So does the Republican Presidential nominee. Trump delivers careful policy speeches. His polling rises. LePage can follow the same path to future victories. 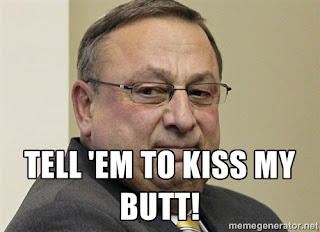 Republican governors who fight for their constituents need to know that all of us have their backs and will support their efforts. So, I say to Governor Paul LePage, if he has any aggressive detractors who want him gone, he should respond:

“Tell ‘em to kiss my butt!”
Posted by Arthur Christopher Schaper at 8:43 PM