Fight goes to the Senate

On Tuesday Aug. 23, the full California State Assembly finally voted on Bill SB 1146, and it ultimately passed that chamber. But because of ultra-aggressive pro-family lobbying, it took two tries because it failed to pass the first time!
Because SB 1146 was heavily supported by the Democrat leadership, its failure to pass at the scheduled floor vote shocked a lot of people. However, the bill’s supporters and Assembly leaders used a parliamentary trick to keep the vote “open” until they could twist enough arms and threaten members who had abstained to vote “yes” on a second vote. And even then it only passed by a razor-thin margin. The bill now goes to the Senate where the fight continues.

Bill SB 1146, which would force the LGBT agenda into Christian colleges, seemed to be unstoppable in the California Legislature. After breezing easily through the State Senate and three State Assembly Committees, it looked like it would blow through the full State Assembly with no problem.
Its ultimate passage was helped by the shameful cave-in by major leaders of religious colleges in California. After the group lobbied hard against the bill, and even did mailings in key legislative districts, the sponsor of the bill agreed to a “compromise” in the language. But it left in major parts that would do extensive damage to religious colleges. Nevertheless, this group of college leadersannounced its support for the amended bill! It was an unforced surrender!
On top of that, the statewide radical LGBT lobbying group Equality California was pressuring legislators to pass it.

A buzz-saw of pro-family activism gears up

Then the buzz-saw of take-no-prisoners pro-family groups and religious groups, which had started in late June, hit its stride in August. Politicians across the state heard from angry constituents. Moreover, California MassResistance organized protests and group visits at the home offices of numerous key legislators.

Politicians and their staffs were not used to dealing with outraged conservatives who weren’t afraid of liberals. It seems to have had a psychological effect. Over the last month, the bill’s support began to steadily break down. Many legislators seemed to think: Why take a lot of heat for a bill they really didn’t care that much about?

Even a second compromise by the bill’s sponsor on Aug. 19 couldn’t really stem the tide. Of course, as pro-family people pointed out, it was still a terrible, pernicious bill.

Last week, as SB 1146 was sent to the full Assembly, the California Legislature began the final ten days of its 2016 session (ending Aug. 31). As usual, there was a blizzard of activity trying to get bills passed before the deadline. Experts we talked to figured SB 1146 would be taken up right away. But the leadership apparently sensed the loss of support and held it for a while. Three days went by before it finally came up for a vote on Tuesday, Aug. 23.

Taking a vote, some pressure, then a second vote

There are 80 members of the California Assembly. According to the rules, a bill must get 41 votes to pass, no matter how many members are voting that day. Thus, an abstention (or an absence) is basically the same as a “no” vote. Nevertheless, there are 52 Democrats and 28 Republicans, so most Democrat-supported bills still pass easily. That didn’t happen this time. 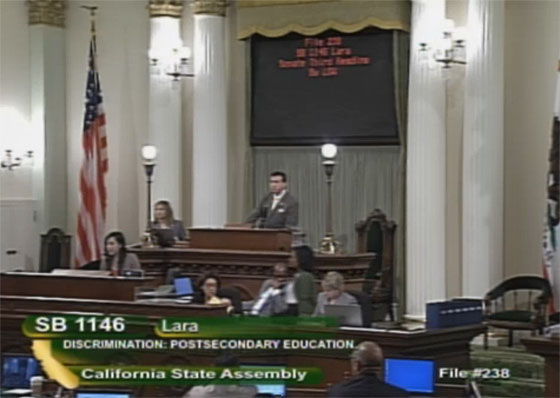 The California State Assembly prepares to take up SB 1146.
When it came up for debate on Tuesday afternoon, only one person, Democratic Asst. Majority Whip Evan Low (an "out" homosexual), spoke on it. He leveraged the cave-in by the religious college leaders to push the bill. He told the members:

This bill has been significantly amended and the universities have removed their opposition to support our mutual position.

Sadly, not a single Republican (or anyone else) was willing to stand up and speak against the bill, despite the horrific iimpact on Christian colleges, religious freedom, and the First Amendment.
Then the vote was taken. The count was only 33 in favor -- with 19 against and 28 abstaining. It failed to pass! 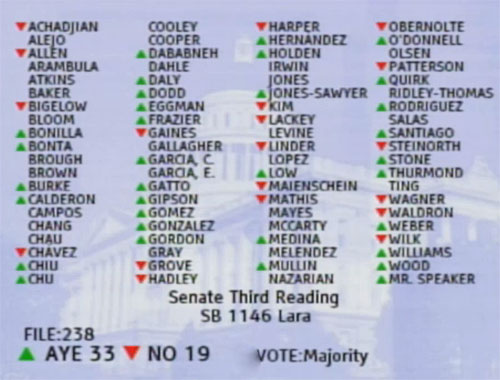 When the members looked up on the board after the first vote, this is what they saw. It failed to pass!

Normally, that would be chalked up as a defeat and they would move on. But the speaker and the bill’s main Assembly proponent immediately invoked a parliamentary rule to keep the vote “open” indefinitely that afternoon.

And they went right to work. According to people we talked to, the Democratic floor leaders cornered several Democrats who had abstained, twisting arms and threatening them in various ways. But even that was hard going.

When they finally took the vote again later that afternoon, they squeaked by with 42 votes in favor, 23 against, and 15 abstaining. Interestingly, few more Republicans also went from “abstain” to “against”.  It was mostly along party lines; one Republican voted for the bill and three Democrats voted against it. 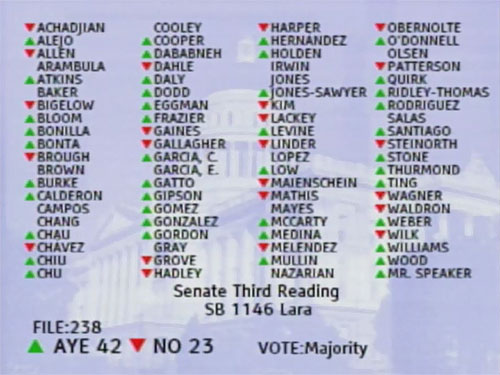 After pressure and arm-twisting, the leadership was finally able to squeak through a victory.
(NOTE: The California Assembly allows members who had abstained to add their votes until midnight that evening, as long as it wouldn’t change the outcome. The final tally was 45 in favor, 28 against, and 7 abstaining.)

The fact that the overwhelmingly Democrat Assembly couldn’t muster the votes to pass SB 1146 the first time – even with major religious leaders shamefully supporting the bill and the rabid LGBT activists breathing down their neck – makes a big statement.

The climate in the California State Capitol is changing! That’s because groups like California MassResistance, SaveCalifornia.com, and the others fighting SB 1146 are in the ring, not backing down, and making a difference.

In tomorrow’s post, we will have photos and video of some of the activism that California MassResistance has been doing this month. And we will keep you up to date as the fight moves to the Senate during these last days of the 2016 session.
Posted by Arthur Christopher Schaper at 1:04 PM