The week is flying by for me, and for many in California.

We the People Rising are raising our voices. We are not going to sit back and watch the state of California descend into inexorable destruction, waste, and chaos.

Donald Trump supporters are emerging from all parts of the state, and rallying against the destructive consequences of illegal immigration. Republicans face an unprecedented set of challenges across the country, including a corrupted, biased media obsessed with crowning Hillary Clinton the next President of the United States.

On August 20th, We the People Rising gathered at the Adelanto Detention Center to show our support for ICE.

The San Bernardino  County Sheriff''s Department informed all of us to stay out of the street and protest, while the illegal aliens and the amnesty advocates would protest on the other side of the street. A small ground arrived within thirty minutes of the protest, which started at 5pm and would continue until 9pm, 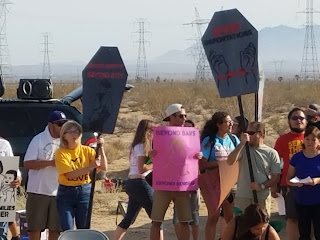 I arrive at the event just before it began, and stayed for an hour and a half. The Dia de Los Muertos signs and skulls emerged above a growing crowd. The group was mostly Hispanic, Lots of signs in Spanish showed solidarity with illegal aliens, refugees, and regressive illiberal causes in general.

About twenty people were on our side. 120 people showed up to protest for the illegals. 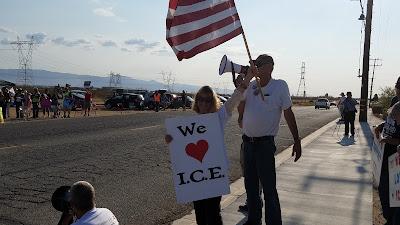 Why were they demanding the shut-down of the Adelanto Detention Center? Three young illegals had died in the facility. Of course, the rabid Marxist activists were using those three deaths to justify ending deportations and instituting an en masse amnesty. Those three illegals killed in the detention center would not have died if they had not entered into this country illegally. Pretty simple logic, that is if the rule of law matters.

We the People Rising lined up with our posters, our Remembrance Project shirts, and our flags, one of which bore the Evergreen tree and read "An Appeal to Heaven." Yes indeed. 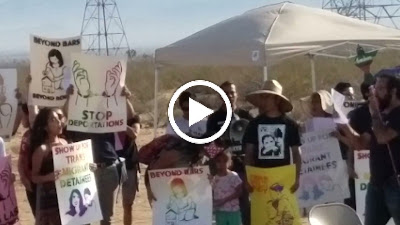 We chanted "We Love ICE!" We were not afraid to support our country and our border control law enforcement. How frustrating it must be for our ICE officials, who cannot enforce the laws on the book because of the rampant lawlessness from the current occupant in the White House. 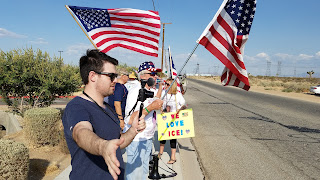 A reporter began walking around our group, asking why we were there. He offered himself as an impartial observer who wanted to understand everyone's point of view. 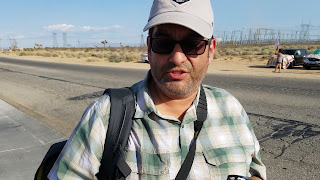 Yet within five minutes of his interview with me, I could tell he was pro-illegal and pro-amnesty.

Here is the first part of our interview: 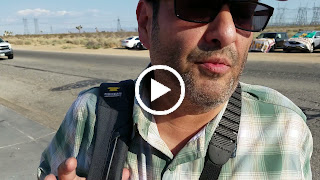 One of the most offensive parts of this interview? He challenged me on the veterans issue, since the men and women who have but their life and their loved ones on the line for this country receive scant attention and care, but illegal aliens receive housing, food, welfare payment living on everyone else's doles. They get free education and health care, while our veterans die on secret waiting lists, too.

The reporter wanted to draw an eual parity between a veteran on a green card that has expired with an illegal alien. If someone who is in this country through legal means has given blood and treasure for this country, I do believe that he or she should not be deported because of bureaucratic entanglements and budgetary snafus.

But that limited circumstance in no way compares with the thousands of illegal aliens pouring across our borders taking advantage of lax enforcement and lavish government subsidies.

Then he compared illegal immigration to ... jay-walking!

I went apoplectic. He was indeed debating me on illegal immigration, and wanted to justify the plight of the "poor immigrants", even though more of them are committing crimes or taking advantage of the government welfare system.

Chanell Temple and I had a real war of words with this "unbiased" reporter.

I welcomed this exchange. I also took advantage of the left-wing talking points which paint up the hard and cruel American policy of enforcement without considering that Mexico has a wall along their own Southern Border, and national military shoot at people who try to enter Mexico illegally. Why does a double-standard exist, that the United States cannot control their borders?

The other left-wing talking point about enforcement focuses on how ICE and pro-enforcement advocates are splitting up families.

First of all, it is not my fault that parents put their children at risk and bring them into the United States illegally.

Second, for anyone who wants to talk about separating families, when will the press give due diligence and respect to the thousands of families who have lost loved one to illegal aliens?

Like Tierra Stansberry, who was burned alive in an abandoned warehouse in Los Angeles with five other people. Why? An illegal alien from Honduras named Johnny Sanchez set the fire in retaliation against another transient in the building.

Her mother and father will never see their daughter again. This family will never be reunited on this earth. Illegals in this country can relocate to their home countries then enter the country legally. Those families can come together again, because every member is still alive.

More activists who care about the rule of law, legal immigration, and enforcement need to take a hard stance against pro-illegal forces, especially in the press. The more that they play off of guilt, fear, and emotional personal stories, the more that we have to counter with our more accurate accounts, and remind the public that illegal immigration is not a victimless crime at all.

The rest of the team continued to challenge the reporter for his biased views. Raul Rodriguez of America First Latinos even threatened to have him removed, since the pro-amnesty forces were supposed to protest on the other side of the street. 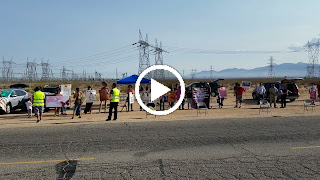 The pro-illegal crowd started walking around in circles, chanting an end to deportations, enforcement, and the rule of law. We the People Rising continued to chant our support for law enforcement, the rule of law, and our country's national integrity and security.

I liked taking their slogans and throwing them back: "Stop the Hate! We Love ICE!"

The other side demonstrated hateful, uncouth behavior.

One protester gesticulated obscene gestures at us:

Here are other scenes recorded, including a scene where one of the illegal activists lit a fire in a bowl for a pagan ritual which followed right afterwards:

That's a fire hazard, but the local sheriff's deputies did nothing about it.

Check out more photos of  We the People Rising: 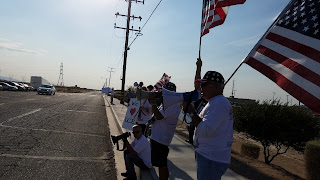 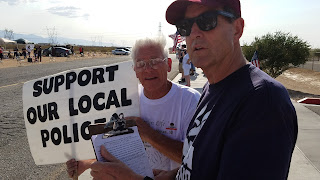 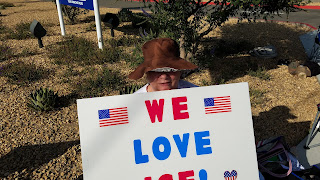 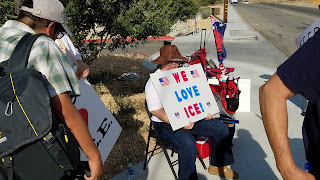 120 illegal alien activists lined up along the road.

Only one reporter showed up, and he betrayed his liberal, pro-illegal bias right away.

With more demonstrations like this, the open borders lobby may find out that they have fewer resources and less energy to pursue their perverse agenda.

Men and women of California, and of all backgrounds, will no longer tolerate the incessant attacks on our country's national sovereignty. We the People Rising will be there to push back against the pro-illegal alien forces, and will not relent until they understand this land is our land, and not a land of lawlessness, criminality, and chaos.