Santa Monica, California does not have to stay a blue city.

True progress is based on freedom, accomplishment, and merit.

The policies that have defined Santa Monica will only hurt the community if not met with better alternatives.

Unfortunately, conservatives have played it safe for too long. Instead of going to blue areas.

It's time to have some fun.

It's time to go where no conservative has gone before -- or at least has not visited in the last two or three decades.

Roger Hilmer of Sherman Oaks was on had once again to sponsor a registration drive along the 3rd Street Promenade.

Other members of We the People Rising came down to help us out too!

Before the rest of the team showed up, I spoke with some of the passersby.

Johnnie was not voting for Hillary Clinton, but was not going to vote for Trump.

We did not agree on candidates, but we respected our different points of view on issues.

Mike McGetrick started talking with a street clown. He admitted that he wasn't sure who he was going to vote for, but he didn't like the idea of voting for Hillary Clinton. 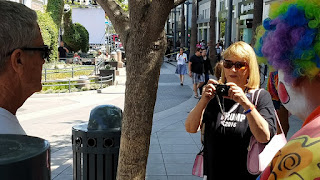 He then offered to vote for me for President! HA!

Check out his full remarks here.

For about an hour, our team reached out to different voters walking by.

Most of them just waved or ignored us.

Some passers-by cursed out or argued with Mike because of his Trump Shirt. 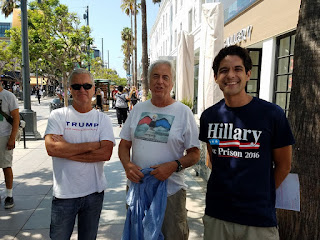 Roger did a great job explaining to voters why he supports Donald Trump: no globalist trade deals which hurt individual countries, and secure borders. 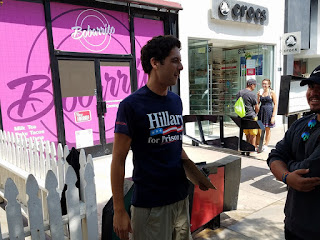 I spoke with a few other people, including a lady named Ellen. She wanted to switch her affiliation to Decline to State, but she was still thinking about voting for Donald Trump.

Before We the People Rising left for the day, one couple approached us and gladly shouted "I am voting for Donald Trump!" He then shook our hands and thanked us for being out there.

It was a good day, and we plan and stepping out more to get people signed up and vote or Trump!
Posted by Arthur Christopher Schaper at 9:58 PM