Ricardo Lara: No One Wanted Your SB 1146 Perversion!

State Senator Ricardo Lara has aroused the ire of many constituents.

His State Senate Facebook page is filled with comments from constituents outraged with his offensive, unjust attacks on the First Amendment, as well as his corrupt attempts to declare war on biology and minority students seeking a good education.

SB 1146 was anything but well-received.


LARA: Any college or university receiving state funds should be restricted from discriminating against students on the basis of their gender identity or sexual orientation.

And here were the comments:

Susan Curran Lee Sir you were elected to represent all the people of your district and state. Your championing against faith based schools and their code of conduct if same sex students don't want to follow a code of conduct that is their right and there are amazing colleges in your state that do not have such a code. The tolerance you seem to practice ignores hundreds of students willing to submit to a code of conduct. I am tired of tolerance and laws that favor a small percentage and ignore the rest tolerance is a two sided coin I listen to you and you listen to me and we respect each other! Your actions show you are a one sided legislature only
ignoring laws already there .

If a student willingly chooses a university they do so willing to submit to the rules if they don't want to go somewhere else. You seem to also hold the same views with illegals within our country there are laws and procedures already in place for a path of citizenship. Perhaps your time would be better spent helping illegals and students not wanting to follow rules help them find a school and illegals the nearest place to fill out papers to become citizens!!! Lead in the way of excellence and helping all your voting base!!!

Julián Del Real-Calleros Well, take away their funding. It just means that they would only enroll students with a lot of money. No more financial aid or grant money for low-income students. They may be partially publicly funded, but they run independently.

And most of all, if you are confuse or identity with an identity not recognize by a school of faith, don't apply there. You're right are with public institutions, not private ones.
Like · Reply · 9 · June 22 at 2:05pm · Edited

Hector Altamirano Are you implying that it's okay for private institutions to discriminate as long as they don't get federal funding? Have you seen yourself in a mirror lately? If you don't know, you are latino and a minority. Our LGBT community does not deserve to be treated any different than you or I.
Like · Reply · June 22 at 6:00pm

Julián Del Real-Calleros You're point of me being Latino argues what? I'm a Roman Catholic, and it a Roman Catholic school does not wishes to accommodate trans or other identity groups, it is within their right to do so. It is against our doctrine to recognize such identities.
Like · Reply · 2 · June 22 at 6:03pm

Hector Altamirano Argues that as a minority, we should stand together and fight discrimination.
Like · Reply · June 22 at 6:05pm

Julián Del Real-Calleros Hector Altamirano How about no. That fact that we are both minorities groups isn't a good argument for unification. In case you missed it, I am a Roman Catholic, and I believe in the theological doctrine. We should respect each other, but that doesn't mean we should cave to your identity crisis.

Mr. Lara's goal is to disrupt the teachings of the Holy See. He is searching to fight for the "rights" of one group while violating the RIGHTS of another.

If you don't agree with the teaching of a religious institution, do not apply to work or attend school in such an institution. It is as simple as that.
Like · Reply · 4 · June 22 at 6:11pm

Here were more comments on that one thread:

Someone needs to let Ramon know that The Democratic members of the state assembly caved to the homosexual lobby.

Martin Calle Do you not have enough things to do with our time than waste the public's time and money on frivolous and harmful legislation impacting religious freedom. You are making much ado about nothing only to make a name for yourself. #Politicians #SB1146 We segment society because some people have standards and beliefs. Deal with it and adjust. #GrowUp and learn how to live with people who hold dear beliefs and standards different than your own rather than tearing their beliefs down and weakening America with legislated political correctness. #RicardoLara your type of legislation is why everyone will elect #DonaldTrump and make America great again. Legislation is not an equalizer. Stop using it as such and you will spend your time more productively on things that matter.

And also this. These were the most caustic, and brutally honest:

Dave Allen Ah, this is the hook the bigoted, powerful gaystapo is using to attack Christians, a hate filled strategy outlined in their psy-ops propaganda manifesto "Overhauling Straight America.

Lara is a gaystapo homosexual agitator who openly discriminates against conservatives and people of Christian faith.

Bigoted cavemen like him need to crawl out of the Dark Ages and embrace the diversity the Christians bring t0o his narrow world view, and stop attacking the basic human and civil rights to not be forced by the Gaystapo to embrace their fiery brand of Homo-Sharia.
Like · Reply · 6 · June 23 at 12:16pm

How about these comments?

James Goldy With all the colleges in California this individual has to pick on Christian colleges in order to give individuals who don't believe in God a right to do what ever they want, this is the reason California is a joke and going further in debt, instead of bowing down to everything and everyone what's next allowing rights for people to become moe immoral
Like · Reply · 2 · June 23 at 12:20pm

Earl Hemmila Mr. Lara. An individual can choose to attend or not attend a Christian college. Keep your nose out of their business.
Like · Reply · 6 · June 23 at 12:42pm

Jim Arnold "Congress shall make no law respecting an establishment of religion, or prohibiting the free exercise thereof"...am I missing something?
Like · Reply · 4 · June 23 at 12:50pm

Ricardo Lara is all wrong about this terrible "bill". 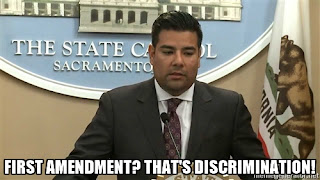 It's contrary to the basic tenets of our country! 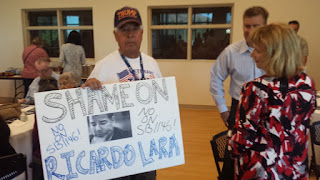