Over the past month, I have followed a flurry of Twitter feeds showcasing Latino support for Donald Trump.  Were those social sites a front, a set of troll sites just to stir people up, or the real deal? One tweet announced a Latinos por Trump rally in Anaheim, California for August 28th, 2016.

I decided to check it out. I thought it was too good to be true, but I made it. Traffic on a Sunday afternoon going down the 405 freeway (the main artery for traffic throughout the South Bay section of Los Angeles County) was not the obstacle I had feared. For this occasion, I thought it would be appropriate to wear my Remembrance Project T-shirt with Marcello Bisarella, a young man killed by a drunk-driving illegal alien last November … in Santa Ana, right next door to Anaheim. 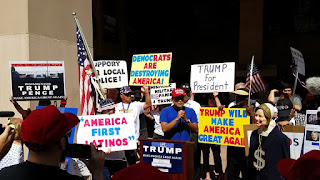 Orange County has transformed into a hotbed of discontent over immigration, and this fight has clashed for the worse along the ethnic fault lines of the emerging Hispanic political powerhouse against the long-standing conservative and patriotic impulses which define Orange County.

Anaheim California has turned into the middle-ground battleground. Anaheim, the heart of Orange County, is heavily Hispanic now, much more Democratic, currently represented by liberals in Sacramento and Washington. Loony Congresswoman Loretta Sanchez (of the infamous war-whoop and silly Christmas cards), had defeated conservative firebrand Robert B-One Bob Dornan by 900 votes (and a lot of voter fraud) in 1996. Now she’s running for U.S. Senate to replace Barbara Boxer, and two more Democrats will compete for the entrenched entitlement of taking her place (Thank you Prop 14, NOT!).

One candidate, an openly gay Vietnamese mayor of Garden Grove, who majored in Social Justice, will compete again former State Senator Lou Correa, the expected open-borders establishment pick who never held a real job in his life (who wanted to expand the number will likely cruise to victory and inherit the seat for another twenty years. Unless Republicans start reaching out to Latinos on the issues that concern everyone, the blue hue overtaking Anaheim will swallow Orange County whole.
Perhaps Latinos por Trump will strengthen the conservative brand again.

As soon as I arrived, I noticed a brimming crowd assembly at Anaheim City Hal. 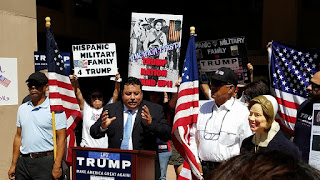 Sure, I had met a few in the past, but most of them stood out in isolation or whispered under their breath to their closest conservative confidants (not necessarily their family members) their support for El Donald. As I had written last week—challenging and shaming RINO Rosario Marin for selling out her party and her country for Crooked Hillary—Americans of diverse Hispanic descent are supporting Donald Trump. Undocumented Latino supporters for Donald Trump are coming out of the shadows.

On August 28th in Anaheim California, they were definitely not hiding.

Like other Californians, they are fed up with an entrenched, corrupted political class which has turned the Golden State into a sanctuary state for illegal aliens. They also despise the Washington DC two-step of self-satisfied globalists who enrich themselves through crony capitalism and government maneuvering.

Above all, they want to stop the contagion of lawlessness.

4. A Presidential candidate who will stand up to ISIS and fight terrorism.

5. An end to government welfarism in place of opportunity

4. And they want a big beautiful wall to secure our porous border. 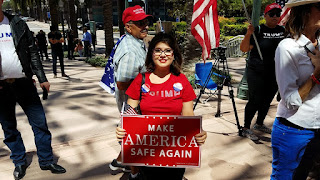 Unlike liberal pro-amnesty advocates and their Soros-backed hordes, these Latinos love this country, and they are grateful for everything they have earned here. They don’t hold back their disgust with illegal immigration, and they don’t want unfettered open borders ruining the promise of the American Dream for them or for their children.

The crowd in front of Anaheim city hall was large, diverse, and lively.

A number of “wise Latinas” are all out for Trump, too, including one woman whose parents and grandparents had emigrated from Eastern Europe to Mexico, and finally to California.

“The Democrats tell me that Donald Trump is going to deport me! But I am a legal resident, a citizen of this country!”

Everyone in the crowd laughed out loud.

These proud Americans slammed the Democratic Party for their “Operation Taco Bowl” branding attempts. The DNC does not own any one group of people. Latinos like Herrera are denouncing the Democratic leadership in this state—and across the country—for taking advantage of Hispanic voters, hispandering to their worst fears with the race card, plus lavish (but thankfully unkept) promises for open borders and lax immigration enforcement.

Chants of “Lock her up!” and “Build that wall” burst out of the assembly while one Latino—and Latina—Trump supporter after another informed the media and the world at large that they were stumping for Trump. 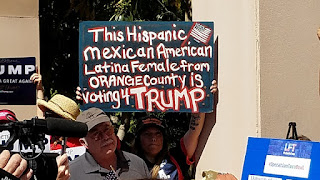 A large media presence swarmed the area. They tried to downplay the crowd as a small turnout in light of the large and growing Hispanic population in Orange County. Jorge Herrera and others denounced the liberal media, including CNN (the Clinton News Network), and they thrashed the Obama-Clinton-Alinksyite machine of bigotry and racism. The shame and blame game is no longer working, and these Latino Trumperos are not falling for the lies.

After an hour of speeches, I attended a fundraiser at the Four Seasons Hotel in Beverly Hills. There, I met another Hispanic for Trump, an architect from Peru. His parents were Hungarian Jews who fled the Nazis. Today, he is hoping for more Trump support, and the chances of a conservative resurgence taking back Los Angeles if Tea Party groups would reach out to Orthodox Jewish communities.


I look forward to more Hispanics’ boldly shouting their support for Trump in the months to come! 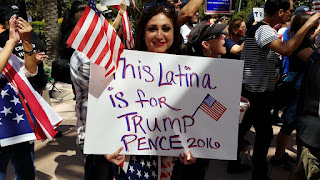