There I was, at the 3rd Street Promenade in the People's Republic of Santa Monica.

Roger Hilmer of West Los Angeles was leading a voter registration drive to get California voters signed up ... and to vote for Donald Trump.

Love him or hate him, his a stark improvement to Hillary Clinton, Gary Johnson, and even Jill Stein.

I was not sure what to expect, standing along a sidewalk where easily 90% of the travelers were liberal Democrats, or at least Donald Trump haters.

And the first person who spoke to me ...

Was from San Diego, had moved to Santa Monica.

She needed to register for her new location.

She is a Donald Trump supporter! 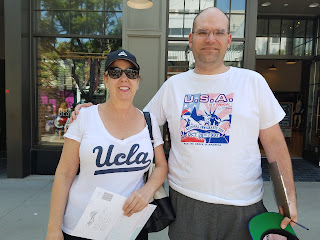 Roger seemed to be having more fun on the Eastern (right) side of the 3rd Street Promenade, so I joined him.

He had the "Hillary for Prison" shirt.

Next time, I will come better dressed.

Within five minutes, two young ladies approached us and asked "Why does he have a 'Hillary for Prison' T-shirt?"

They actually believed that Crooked Hillary committed no crime when she did nothing for the four diplomats in Benghazi, when she mishandled classified information on a private e-mail server, and the fact that she and her perverse husband have been running an international money-laundering scheme through their "charity" foundation.

They were really not interested in listening to the truth about how Crooked Hillary really is.

I got a few of their comments as they walked away from me: 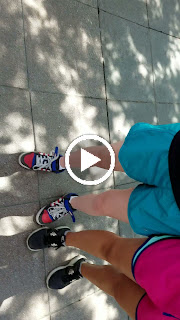 How about that for love and tolerance.

But my favorite person that I met along the Promenade was this hard-core Trump supporter named Edmond! 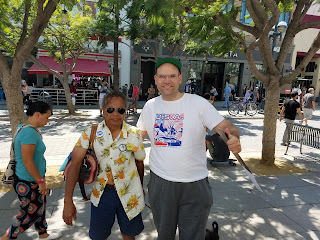 He and his dog are walking campaigners for Trump: 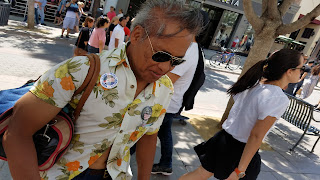 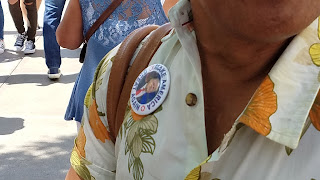 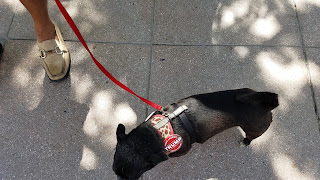 He came to the United States from Tahiti in 1977!

He has lived in Santa Monica nearly the whole time.

He did not become a full naturalized citizen until 1988!

Why does he support Donald Trump? He will build a wall and stop illegal immigration.

Why do all the illegal aliens get a pass, but law-abiding citizens like Edmond get the shaft?

Check out our interview here: 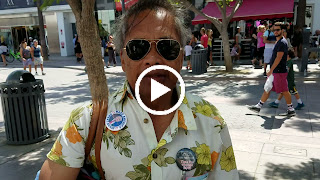 (A propos, Edmond is a native citizen of France, and he speaks French! We have a good time parler francais)

It was a pretty successful day. 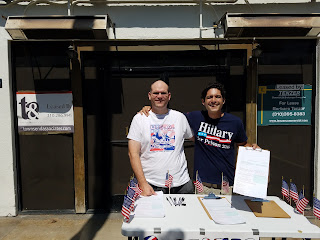