An editor in Pennsylvania informed me of the following development:

I am in the part of Pennsylvania that resembles rural Alabama, an hour west of State College. We have more deer than people. It is definite Trump country here, solidly Republican. I am in a teeny minority, one of 160 registered Libertarians in Jefferson County; Dems have about 9,000 registreees, Republicans 16,000, all others 3,100 or so. You see some Trump signs, almost no Hillary signs, just one Gary Johnson sign (mine). 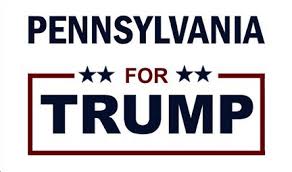 It’s just hard to predict what will happen when people stand in front of those machines.

I’d love to be more specific, but it just boils down to “nobody knows.”

Pennsylvania is back in play.

Republican lawmakers are making a difference in Philadelphia.

Republican U.S. Senator Pat Toomey is a strong contender for his seat.

He won by 1% against an outsider Democratic House Rep.

The current challenger is far left, and out of touch.

This will be an interesting year in Pennsylvania politics.