Even though the registration is heavily Democratic, and only 9% Republican. his challenger Theresa Sanford won 23% of the vote.

That result shocked Gipson, as it should.

His campaign engaged in some dirty tactics

A machine, big money and a lie in L.A. Assembly race

Mike Gipson won his Assembly race thanks to the clout of Rep. Maxine Waters and Assemblyman Isadore Hall, the California Democratic Party, heavy contributions from the moneyed interests that matter, and a lie.

Mike Gipson is another Isadore Hall.

Sold out to the big money interests in the district.

He does not stand on the represented fortunes of the people in his district.

Using some of their money, Gipson fabricated and sent to voters in his South Central Los Angeles Assembly district one of the most vile mailers I’ve ever seen. There is little recourse. With other new legislators, he will take the solemn oath of office on Dec. 1. 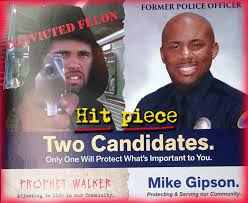 Like all freshmen, Gipson will be a backbencher. But the smart people who select and elect candidates see potential. They spent $2.7 million on the campaign for and against Gipson and his opponent, Prophet Walker, who was running for the first time.

Gipson’s deception wasn’t clever. Anyone with a computer could have done it. He cut out a photo of Walker and pasted it in a dark hoodie, and manipulated the photo to depict Walker aiming a gun and grinning, though in context it looks like a snarl. Gipson placed a photo of his own face onto a police officer in uniform.

Walker had a criminal record.

He turned his life around.

The verbiage described Walker’s criminal past and Gipson’s good work. But that was secondary. The point was the menacing image, juxtaposed against “Officer” Gipson. Gipson was a cop 20 years ago in Maywood, a gritty L.A. suburb that in 2010 disbanded its police force because of its history of brutality and corruption.

Maywood is embroiled with corruption, too.

How long did Gipson serve as a police officer?

“I thought it was disgusting, in the wake of everything from Ferguson to Trayvon Martin,” Walker said of the mailer.

Walker, 26, readily admits his criminal past. It was integral to his campaign pledge that he’d try to help other kids avoid his mistakes and focus on improving the criminal justice system.

He had pleaded guilty to robbing and beating a man when he was 16, and spent five years in prison. He got an associate of arts degree while behind bars, attended Loyola Marymount University in Los Angeles upon his release and got work as a civil engineer.

This state--this country--needs to see more success stories like this one.

The Daily Breeze endorsed Walker, too!

Hollywood liberals embraced Walker and his story of redemption and helped fund his campaign, as did charter school advocates and the Service Employees International Union, the one major inside player that opposed the machine.

Gipson, 47, didn’t need to lie; he was never going to lose. He had worked for several South Central Los Angeles politicians, spent 12 years on the staff of the United Teachers of Los Angeles, is chief of staff to Board of Equalization member Jerome Horton, and is a Carson City Councilman. As he and his cronies saw it, that made him heir to Assembly District 64.

That word "heir" is deeply offensive. Where does anyone get the idea that any one politician or political machine gets to decide who the next candidate will be for any seat?

Assembly District 64’s residents have the third highest rate of obesity, fifth highest for diabetes and 12th highest in smoking of the 80 Assembly districts, according to the UCLA Center for Health Policy Research.

The district isn't doing that well. What does Gipson plan to do about it now? Has he done anything about it?

The unemployment rate is 10.6 percent, 75th worst of the 80 Assembly districts; 18.2 percent of the residents fall below the poverty line, reports the California Business Roundtable’s California Center for Jobs & the Economy. 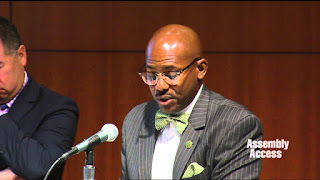 California’s high school dropout rate is 13.1 percent. In Assembly District 64, 20.6 percent of the residents are dropouts.

Charter schools really do make the difference. Why does Gipson oppose a better education for the students in his district? Oh, that's right--he does whatever the Teachers Union tells him to.

“The folks who donated have a vested interest in keeping things exactly the way that they are,” Walker said.

Gipson will replace Hall, the assemblyman who has the distinction of accepting more tobacco money than all but one other Democratic legislator since 2009, just ahead of former Sen. Rod Wright.

Hall is running for the Senate seat left vacant when Wright resigned after he was convicted of perjury for lying about where he lived. Hall almost certainly will win the special election next month.

He did, sadly. Within five months of winning the state senate seat, he is running for Congress to replace Janice Hahn.

Hall gave Gipson a quote for one of his mailers: “Dr. Martin Luther King’s statement about how the true measure of a man is where he stands in times of great challenges underscores the reason why I’m supporting Mike Gipson for State Assembly.”

Gipson called last week to explain the great challenges that led up to the mailer: “I have been hit over 31 times with negative mail. My home was vandalized. … They egged my campaign office on two separate instances.”

Gipson said he snapped when the SEIU sent a mailer accusing him of being a deadbeat dad.

“I am a proud father. I take care of my family,” Gipson said. “I’ve worked all my life for the good of the community.”

Yes, but did that justify a nasty mailer making Prophet Walker look like a street thug?

And so he decided to send the slimy mailer in the campaign’s final week. Walker’s supporters held a press conference to denounce it. There was some TV coverage and an L.A. Times column.

“Putting a young black man in a hoodie with a gun in your face is about the most stereotypically racist move I’ve ever seen from any campaign,” SEIU spokesman Mike Roth wrote in an email to me, five days before the Nov. 4 election. “Gipson is sending the wrong message to every young black kid in the district.”

Yes, indeed, That's right, though, that people can be racist to "their own" people.

Gipson apologized for manipulating the images, not for the sentiments. He said he was most sorry for offending his campaign manager, Josh Pulliam, who had been unaware of Gipson’s plan.

The election code prohibits candidates from maliciously manipulating photographs of their opponents. Victims can sue, but damages are limited to the amount of the cost of the mailer and attorneys’ fees, hardly worth it.

Walker might sue, but other combatants understand it was only business. The SEIU is making amends for not backing Hall’s chosen replacement by giving $8,200 to Hall’s Senate campaign earlier this month. The Capitol crowd is moving on. Whatever recourse there is will be left to the handful of people who vote in Assembly District 64.

Mike Gipson brings neither hope nor balance to Sacramento.

He will do what the lobbyists tell him to.

I wish Theresa Sanford the best.

I wonder when she's going to reach out to Prophet Walker for an endorsement?

The truth is, though, Gipson is another puppet he won't do what is right for his community.