It never ceases to amaze me.

The BCR team takes the time and effort to advertise our events. 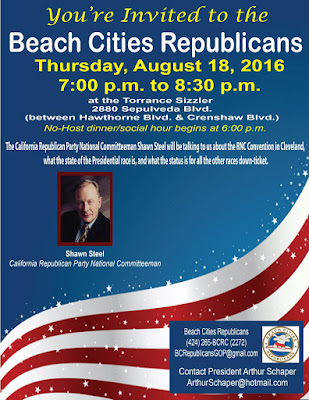 The number of people showing up to our meetings is just astounding.

I sometimes fear that as the months progress to election day, we won't have any more room.

Some of our most dedicated members show up a half-hour before the no-host dinner, and I get to learn about their efforts in their home cities.

They are the first people to tell me: "The Beach Cities Republicans is the only group  that is still active and doing anything in the area."

I appreciate the sentiment, but we are making sure to work with all groups, and we recognize the importance of every major unit in the South Bay and throughout Los Angeles County to make a difference! 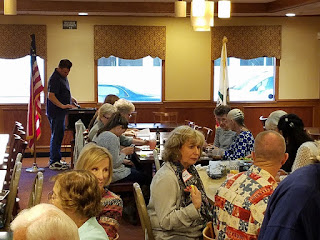 It's a real treasure to see Republican men and women from as far away as West Los Angeles and South Los Angeles visit the club! I really appreciate their hard work on behalf of fellow conservatives in Los Angeles County.

One of the best things about being President of the Beach Cities Republicans? Meeting new people who "just found out about the club."

The description applies to almost everyone in the room.

We had a busy meeting that night.

Five different people contacted me within the week, wanting to speak to our club.

And most importantly, our special guest Shawn Steel, the California Republican Party's National Committeeman, brought the house down. 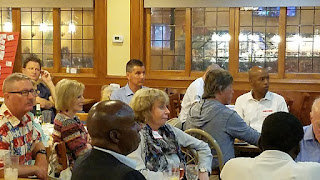 At the outset, I wanted to make a plea to the remaining #NeverTrump voters in our midst and throughout the region. Trump is the only candidate who reached out to the Remembrance Project, an advocacy group which fights for families who have lost loved ones to illegal aliens.

Trump is also refreshingly blunt compared to most politicians--on both sides of the aisle--because he is speaking what weighs on many people's minds. His humanitarian efforts in Louisiana are really impressive, too.

God bless Donald Trump, and if anyone has a problem with that, "You're Fired!"

Next, I gave some reports on our Assemblyman David Hadley.

He has done some incredible things for the South Bay and for all California families! 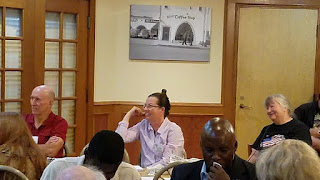 1. He helped shepherd through and pass Civil Asset Forfeiture Reform. This is one of many modern day civil rights causes. Currently, police officers can arrest and seize property from private citizens without a conviction for a crime! It is outrageous, communistic behavior, although the practice had originated with the better intentions of ending the illicit drug trade on America's streets.

Hadley had to cheer-lead this proposal in larger part because the original author, State Senator Holly Mitchell, is hostile to law enforcement and embraces the Black Lives (Don't) Matter movement.

Civil libertarians and limited government conservatives would have never moved toward this legislation without David Hadley's leadership.

2. He is an emphatic NO vote on SB 1146, the "Kill Christian Colleges Bill", which is leading toward "End the First Amendment" in the state of California.

After intense lobbying from a state-wide pro-family group called California MassResistance (full disclosure, I serve as director), along with fundraising from other private groups against this public tyranny, the bill's author had to back away from the most officious portions of the bill.

And he is still stripping away more bad parts of the legislation. Hadley has pledged to defend our First Amendment rights, and is continuing to do so in Sacramento. 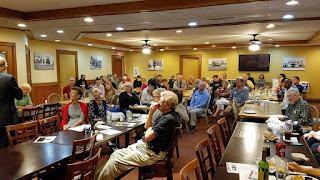 3. He fought to pass a resolution to name a key section of the 405 Freeway after Torrance's hometown hero Lou Zamperini, who passed away in 2014. Great work, David!

This was awesome. Most people do not realize how important judicial officers are. It was a superior court judge who ruled that California's teach tenure laws, including last hired/first fired, were hurting California's kids.

It was a great crowd, and a great evening.

He is running for Superior Court Judge, Seat #11.

He's a conservative, a hard-core law and order Republican, and he reached out to us to speak with the Beach Cities Republicans!

Judges affirm our rights, or can undermine them. They can ensure that our communities are safe from violent criminals, or release them back onto our streets.

Lets hope that more conservative, law-abiding and law-affirming judges like Steve Schreiner step out and make the case for our votes this year.

Our second guest was Dr. Howard Wright, and he spoke on behalf of his brother Dr. Kenneth Wright, who is running for Congress against Ted Lieu, one of the most disruptive, abusive Leftists in the Congress.

And sadly, he has represented the South Bay in some capacity since 2002, when he was elected to the Torrance City Council, and then following the same ascent through the state legislature and now in Congress.

Lieu supported the Iran Deal. He supports removing bail from the criminal justice system, which would allow criminal felons back onto our streets! How about this-Ted Lieu wants to take over the Santa Monica Bay coast line and turn into an over-regulated federal park.

Not to mention his keen obsession with shutting down Exxon-Mobil and taking away individual citizens' right to keep and bear arms!


Thank you, Dr. Wright, for doing the right thing and running against Ted Lieu!

Tracy Hopkins, our First Vice-President, talked about the fight against the Big Green agenda in Hermosa Beach, particularly Community Choice Aggregation, i.e. Obamacare for the Energy Industry. This regime is waste of time and money, and has already cost Hermosa Beach tens of thousands of dollars in consultant fees and research. 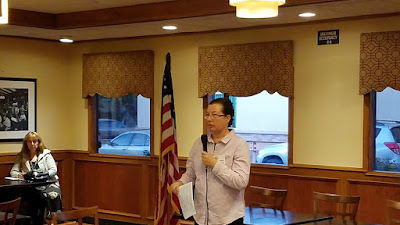 Hermosa Beach infrastructure needs proper attention. Public safety and economic growth should be the focus, not these fantastical pursuits of "Green" energy, which is not green!

She did a great job, and she is rallying more people to assist her in the fight.

Gary Mlynek of Redondo Beach also arrived. He talked about the Gun Apocalypse signed into law by Governor Gun Grab Brown. Petitions were lined up behind the room, and Gary urged all of us to sign off and stop the unprecedented assault on Californians' Second Amendment rights.

Then came our guest of honor, Shawn Steel! 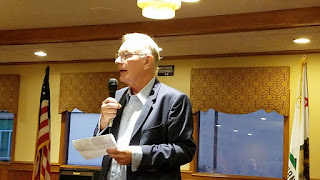 He had a lot of great stories to share from the Republican National Convention in Cleveland.

It was a relatively peaceful affair. He served as Sergeant at Arms, including the power and authority to arrest and remove disorderly individuals from the Convention.

The only event that caused any kind of disturbance was a member of one delegation with a "Black Lives Matter" T-Shirt. 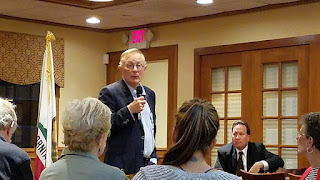 The biggest issue with the movement, or at least with the statement, is that for Republicans, black lives have always matter, from the Civil War to the present day. One staffer spoke with the young lady, and she turned her shirt inside out, so as not to cause untoward disturbances.

The only other rabble-rousers were from the illiberal media looking for any cheap attempt to shame and silence conservatives. None of it worked.

For the record, anyone looking over the RNC crowd would have seen an incomparable diversity with the Democratic Party. Shirley Husar, one of the California GOP delegates, announced the unreserved support for Donald Trump from the California Republican Party. She is one of the most active and outspoken black Republicans in the country!

Steel talked about Trump's rising Presidential temperament. In his latest speech, the Republican nominee acknowledged his heated comments, and regretted if he had caused anyone "personal pain."

He is taking direction, learning some humility, but not holding back or pulling any punches against Crooked Hillary. 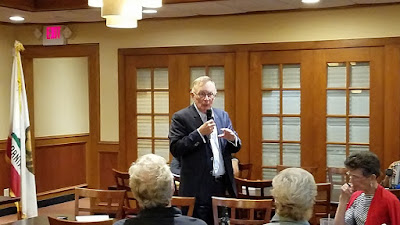 National Committeeman Steel has been the asset he keeps on profiting the California Republican Party. His optimism and keen sense of political realities have kept fellow conservatives engaged and active even in the face of utter losses or disappointing setbacks.

He is working hard to ensure that Republicans maintain the necessary threshold to stop California Democrat from taking a two-thirds majority once again in Sacramento.

Catharine Baker beat her Democratic opponent in a purple district in the East Bay.

Young Kim of Fullerton is facing a tough fight of her own, but the Bernie surge which swept her district will have subsided by November, since the Cal State college socialists-in-training can't stand Establishment Hillary.

David Hadley, the First Republican elected to represent the South Bay in twenty-two years, is the Number One Target in the state of California. He unseated a Democratic union whore who could not drive up turnout in 2014.

In 2016, the entire Democratic political machine will be training their artillery--and every unsavory, unethical, and illegal maneuver--to unseat David.

We can't let that happen, and Steel encouraged us in the many steps we can take to ensure that does not happen.

Republicans have a lot to be grateful for in California.

Our Chairman Jim Brulte has taken measured steps to ensure a growing grassroots operation and image.

Local leaders are taking back their city councils, school boards, and other local agencies.

No matter what challenges may face us in the years to come, California conservatives are rearing up for the fight, get more active at the local level, putting the pressure on wayward lawmakers and ensuring an expansion of our life, liberty, and pursuit of happiness.
Posted by Arthur Christopher Schaper at 12:01 PM