I Was Out of Order Ten Times in Huntington Park

If you review the February 16, 2016 Huntington Park City Council meeting, you will Mayor Karina Macias rule me out of order frequently.

Every time I tried to speak, she either refused to look at me, or she tried to interrupt me.

Every time that I spoke out against their corruption ...

Every time that I held the mayor accountable for interrupting me over and over ...

The mayor would declare:

The Huntington Park City Council has been out of order from the moment that four of the members chose to appoint two illegal aliens to city commissions.

They have continued to be out of order as they do the bidding of Puppet Master Efren Martinez.

They give contracts to their friends and political cronies. 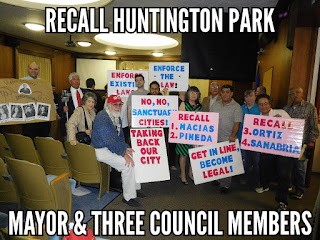 They ignore the needs of the--legal--residents.

Then the city council will be returned to order once again.

In the meantime, I can boast that in Huntington Park, CA

I was ruled out of order TEN TIMES, and there was nothing that they could do about it.

How can that which is out of order rule anyone else in any other way?!