This reform package curbed the collective bargaining power of the public sector unions in Wisconsin. They could only negotiate within certain limits on pay. They could no longer limit talks on healthcare plans. They had to pay more money into their pension and benefits systems. The unions also had to recertify every year and could no longer take money out of the workers' paychecks for union dues.

The pandemonium which had ensured would have scared any respectable governor.

Walker stood up to the unions, curbed their power, cut taxes and spending, and put more money back in the hands of taxpaying Wisconsinites.

The analysis found that the state has saved $3.36 billion by requiring government employees to contribute to their government-backed pensions, and another $404.8 million by opening up employees’ health insurance to competitive bidding, among other cost controls. The savings have been widespread, across state and local governments.

Even liberal cities like Milwaukee and Madison saved hundreds of millions of dollars. Walker's 2010 and later 2012 challenger, Milwaukee mayor Tom Barrett, could not campaign against Walker's Act 10 reforms because has had relied on them to balance his city's protracted and underfunded budget.

To this day, the state with the smallest if negligible pension liabilities is ... Wisconsin!

Not just the cities, but the Wisconsin school districts fared well under Act 10, too!

Milwaukee Public Schools, for instance, saved a whopping $1.3 billion in long-term pension liabilities, according to the MacIver report. The University of Wisconsin System saved $527 million in retirement costs, the study found. And Medford School District recently realized an 11 percent decrease in the cost of its health insurance plan by opening it to competitive bidding.

Incredible! For these successes alone, all while standing up to Big Labor, Walker should have been handed the Republican Party Presidential nomination this year.

His courage and foresight to stop the excessive spending and discipline uncooperative labor unions define true and necessary leadership for our country.

The savings due to Act 10 breaks down to $2,291 for every household in Wisconsin, according to the analysis.

He noted the savings Act 10 delivered allowed Walker and the Republican-led Legislature to provide $2 billion in direct tax relief to taxpayers.

That's money for a down payment on a new car, or investment in a new business, or savings for a college fund. More money in the hands of individual Americans does more good than wasted or misspent funds in the hands of weak city or school boards and greedy labor union bosses. 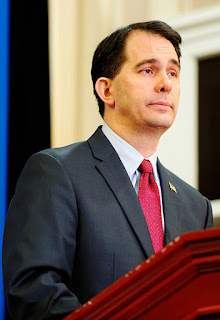 Plenty of public employees and the unions who have seen their ranks dwindle because of Act 10 have a different take. And mainstream media publications have fed the sky-has-fallen narrative in retrospectives on the collective-bargaining reform law.

So, labor unions still complain about the reforms? Notice that many workers in and of themselves have not complained. More importantly, they have simply withdrawn from the unions which rarely represented their best interests.

The "mainstream" media still paints a dour picture of Wisconsin life without unions. The fact is, every liberal organ--whether press, academia, or otherwise--will buoy their boundless ideals on what should work and how things should have transpired.

These visionary aspirations have neither force nor value in the daily lives of individuals and their families, men and women who strive five days a week to provide for themselves and their future.

And yet, the liberal media complains:

Wisconsin State Journal reporter Matthew DeFour wrote some of the more teeth-clenching pieces in the newspaper’s series on Act 10. He argues the lost income public employees faced from having to pay more – or anything – for their benefits took a big bite out of spending in Wisconsin’s economy.

Baloney. A spokesman for taxpayers, as opposed to a political mouthpiece for Big Labor, reports the truth:

Wisconsin Taxpayers Alliance president Todd Berry told the newspaper what others have pointed out along the way, that Wisconsin confronted a $3 billion budget shortfall when Walker took office. The budget fixes at the time helped save untold public-sector jobs and led to lower taxes, ultimately allowing many more taxpayers to keep and spend more of their hard-earned money.

Jobs were saved, the economy started to grow again, and a massive budget shortfall, which borrowing and inflation would have made worse, was reduced to nothing. What might have been, would have been worse if Walker had not taken initiative to reform abusive collective bargaining entitlements.

So, what's the verdict on Act 10 fives years later?

Efficient government has become the norm rather than the exception in Wisconsin.

Beyond the in-state successes, Walker's example emboldened conservatives around the country to stand up to Big Labor and fight for the right to work, literally and figuratively. Michigan, then Wisconsin, and now West Virginia have become Right-to-Work states, with Kentucky and Missouri close behind.

Even though Walker’s presidential bid failed in 2015, his victory over Big Labor has continued working wonders in the minds of men, fighting for control over their government and overcoming the dissolute, inordinate influence of special interests at every level of the state.
Posted by Arthur Christopher Schaper at 9:15 PM