Middle school staff grooms kids to be “transgender” – changes their names – and hides it from parents.

Preferred pronouns. Banning the term ‘boys and girls.’ And more. 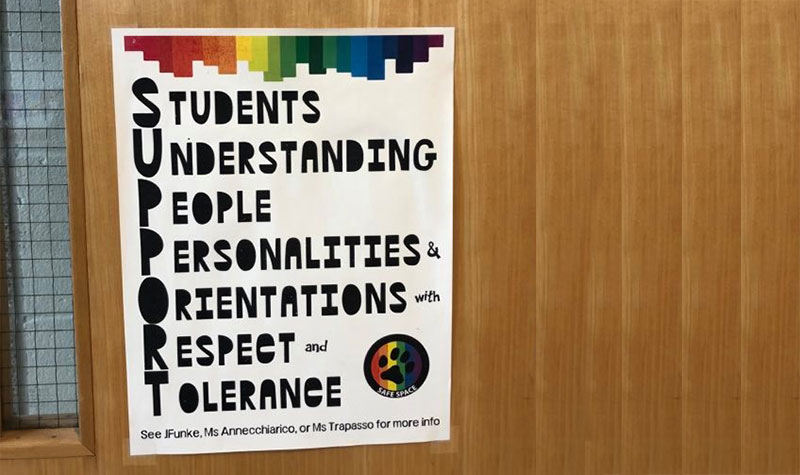 Transgender indoctrination begins: Notice on classroom door from librarian and two other staff members instructs kids to have "respect and tolerance" for the LGBT agenda.

The insane idea of “transgenderism” – that a person was “born as the wrong body” and therefore must “change” it – is now being foisted on middle school students (ages 11-13). What is going on? How does this happen? What you are about to read is ghastly. But it is now frighteningly common across America.

As we described in previous sections, in late 2019 and early 2020 the Baird Middle School in Ludlow, MA, became a center of controversy when a teacher (and some parents) exposed the graphic sexual, homosexual, and transgender themed books in the library and classrooms. This was primarily the handiwork of the librarian (a weird cross-dressing woman) and her many allies on the staff. It was supported by the Principal, the Superintendent, and the School Board. 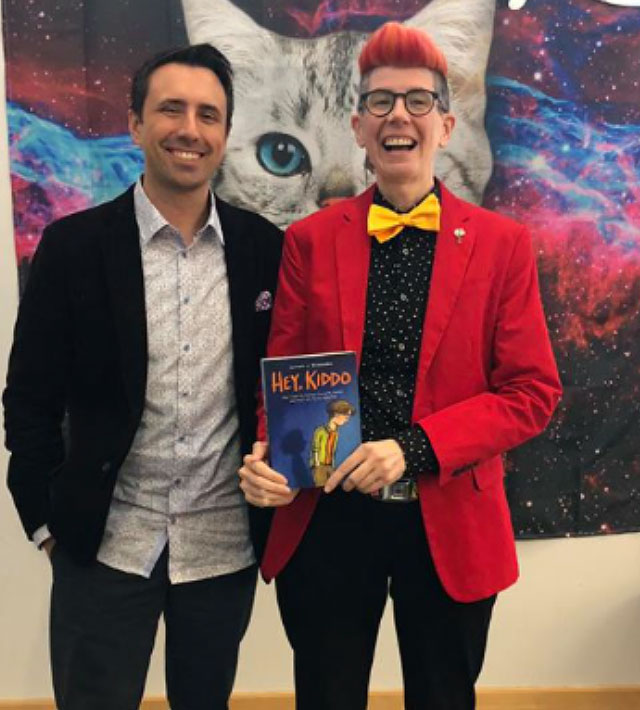 Parents were very upset. But little did they know that this was just the beginning.

The COVID shutdowns kept the kids out of school for much of 2020. But late in the year the kids began coming back for a few days a week in shifts (which often changed). Teachers (and also guidance counselors) took advantage of that disruption to introduce radical “transgender” ideas to the kids.

Because of the changing COVID schedules, many of the kids began spending a lot of time in the library. According to several sources, the librarian often held “one-on-one” book talks with certain children. They were given special books to read and even suggestions of transgender-themed YouTube videos to watch. As one teacher pointed out, many of these are kids from troubled homes and were easy prey for such messages. The librarian also put up a prominent gay / transgender “safe space” sign outside the library door and (we were told) “unisex” signs on the boys’ and girls’ restrooms. 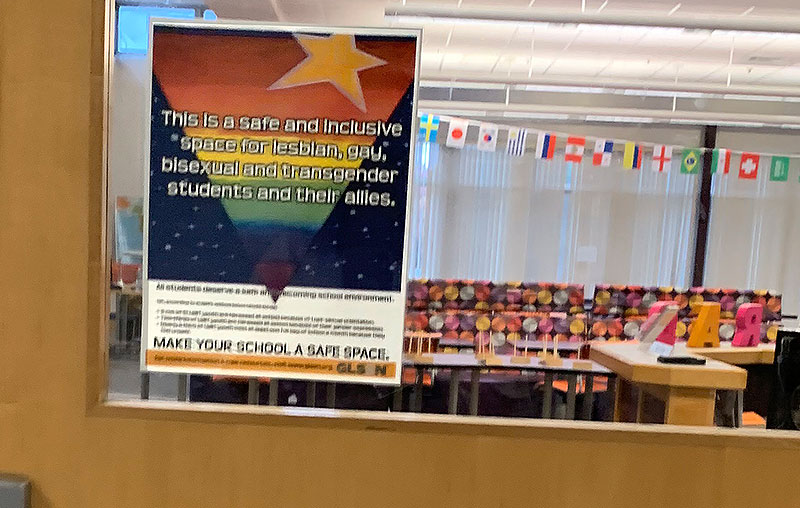 Sign on the library door: "This is a safe and inclusive space for lesbian, gay, bisexual, and transgender students and their allies."

Teachers in the school, along with students, were instructed not to use the terms “boys” and “girls” because they were too gender-specific. A list of “alternatives” was posted with acceptable terms that could be used instead. (It was not universally supported; one teacher there resigned over this.) 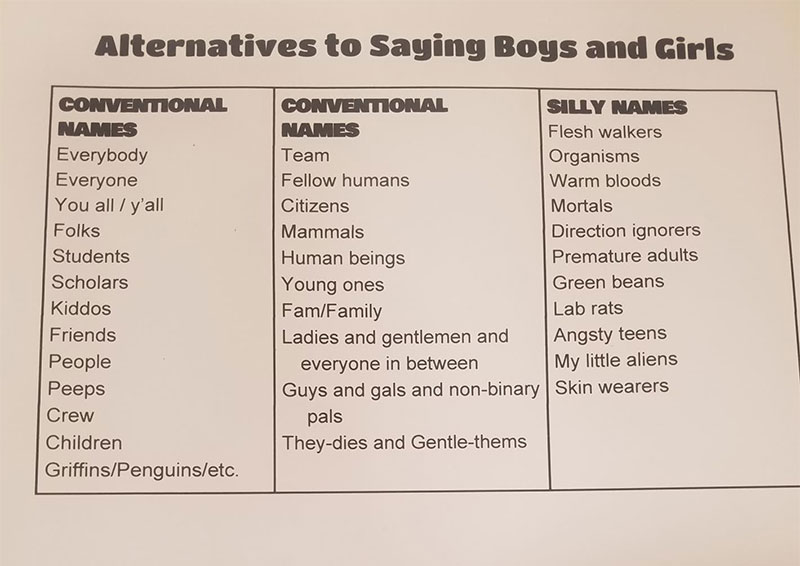 It went even farther. In their classrooms children were being told to decide their “preferred pronouns” (“him” or “her” – or something else!). One can imagine the psychological confusion that this bizarre concept brings to young minds. It is right out of lunatic “queer theory” and educators everywhere are buying into it.

Parents also discovered that some children were being persuaded by school staff, including guidance counselors, that they are truly “transgender.” For example, one girl said that because she likes doing some “boys” things like fishing, she was told that probably she really is a boy.

As children’s confusion grew, teachers were facilitating the trans indoctrination by calling them opposite-sex first names in class. For example, Jack would be called “Judy” and Sharon would be called “Steve” by the teacher - and also fellow students – and they began to accept it as reality. This happened with several children that we now know of. Because the school was doing this to them, the kids thought it was all right. But the school administration purposefully kept this information from the parents.

The Superintendent and Principal both approved of this vile tactic. In fact, they were prepared to officially change kids’ names on the school records “when the student is ready,” we were told – also without parents’ knowledge or input.

It’s hard for normal people to appreciate the depth of this toxic situation. Here is an example of an email that one of the Baird guidance counselors sent to the rest of the staff in early 2021, regarding a 11-year-old girl:

Mary has a preferred name of Michael/Mike and preferred pronouns of he and his. He understands that there will be times that “Mary” and “she/her” slips out and he is fine with that.

Michael is still in the process of telling his parents and is requesting that school staff refer to him as Mary and use she/her pronouns with his parents and in written emails/letters home. When Michael has informed his parents of his preferred name and pronouns, we will change the name in the computer system if that is what he wishes to do at that time.

I explained to him that we understand this is a complicated process and we will be as supportive as possible – but may make mistakes from time to time.

Here's the email as it appeared in peoples' inboxes: 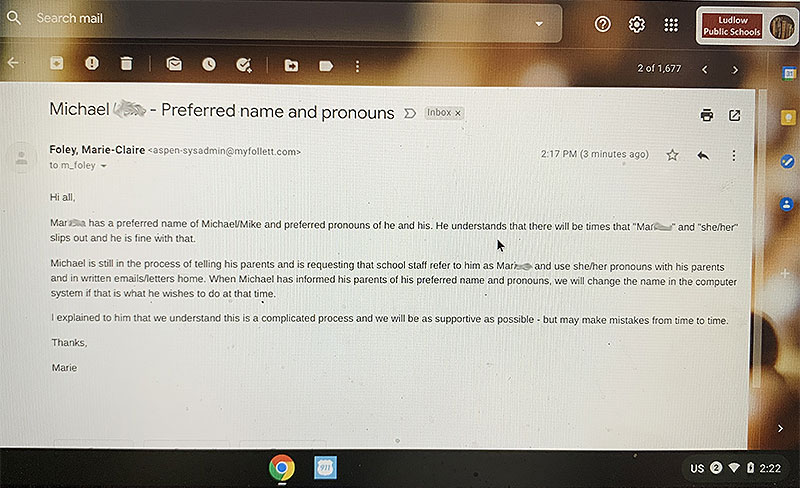 It is hard for most of us to believe that people would do this to children - especially the teachers and guidance counselors in a middle school, with the full support of the Superintendent and Principal and even the School Board.

Unfortunately, most of us are very naive. It is now like this almost everywhere across the country (and beyond). What local schools are doing to vulnerable children is evil and criminal. But this isn’t the end of the story in Ludlow!

Next: The “transgenderism” gets exposed and the fight in Ludlow takes off - as MassResistance gets involved!