A few months ago, I commented on the Singapore short film "Aqua Man." This little movie claims to spotlight "conversion therapy," focusing on the hardships of a boy named Junjie and his religious mother who wants to "pray the gay" out of him with the help of the local pastor. 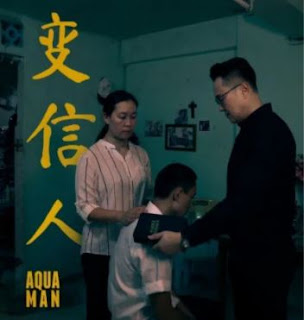 In the previous post, I commented how the movie gets the Gospel wrong, misconstrues the Bible, and basically distorts what true reparative (not "conversion") therapy is all about. One thing is certain: it is not "pray the gay away." Such arbitrary prayers and pleas are nowhere to be found in the Bible.

It only took one month for Jet Ho to conceptualize, write, cast and film Aqua Man, a short film about a young Singaporean boy that looks at the hot-button topic of gay conversion therapy. But that was just the beginning of his struggle for anyone to see it. Because it touches the media third rail of homosexuality, his story of student Jun Jie, his distressed mom, and Bible-armed pastor was rejected at least 15 times, by Ho’s count, by streaming platforms and film festivals

The truth is that the film was rejected by a number of art houses and film festivals because ... it's ridiculous. It's laughably bad!

Consider the following aspects of the movie;

1. In one scene, when "the therapy" is supposed to begin, Junjie is ordered to sit down, so that the pastor and his mom can pray for him. They are simply laying their hands on him. Then, for some reason, Junjie starts to grimace, as though in real pain. Then out of nowhere, he just stands up, shouts, and backs away.

Where is the real motivation here? There is nothing painful about someone praying for you. There is no torture here. The whole motif in this little movie is to give the impression that "conversion therapy" is a painful exercise of some kind. Give me a break!

2. The mother, out of nowhere, grabs her son by the arms and pushes him against the wall. At first, she was distraught, but now she's pushing her kid around? The inconsistency in the character development is somewhat jarring.

3. The mother shames her son. "They call you Ah Gua [sissy, gay]!" But then, later on she says, "I promised I won't tell." What is the point of promising that she won't tell anyone when everyone "knows"?

4. The kid start crying, very weakly. Frankly, it's pretty pathetic, the bad acting at this point. Really? Are we supposed to believe any of this?

5. When the mother tries to bring her son back to the chair to be prayed for, he resists her, trying to pull himself away, but somehow he ends up pushing his mother to the ground. Huh? In what universe, in which physical dimension, does someone pull away from someone, yet end up pushing them to the ground? Please!

6.When the son tries to help his mother up again, she screams to resist him. Then Junjie walks out. Then, in another case of character "whiplash," she becomes morose and whiny, resigned and fearful, murmuring to herself "He will go to hell." None of this is believable.

7. And of course, the pastor finally starts doing something in the movie, kneels down next to the mother, but he conspicuously holds the Bible with "Holy Bible" gleaming into the camera. Why would the Pastor even be carrying the Bible with him in the first place? Clearly, this is an artificial shot. Who would hold their Bible like that, leaning up like that? 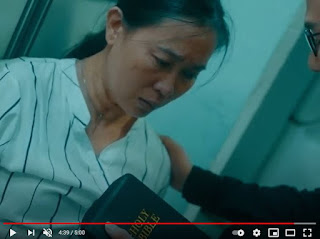 7. In the last scene, we see Junjie leave the HBD flat, simpering. If he's crying, it's clear that it's fake. No tears, just a lot of heaving. First year acting coaches would find so much to fault here. One could imagine this short film getting presented in first year acting courses with a disclaimer: "Don't let this happen to you."

The fact is that the film "Aqua Man" is fundamentally flawed. The notion that a son would become so rebellious just over a pastor praying for him just does not make sense. If anyone puts some thought into this film, it turns out that this film to be so poorly made, it's funny.

Jet Ho and other LGBT activists will play victim, and make the claimt that Singapore's movie industry or filming community rejected this film because of the serious, controversial nature of the subject. The truth is that this movie was rejected not because of its touchy subject matter, but because it was a bad movie. Such is often the case with propaganda films like this, desperate to push a message ("conversion therapy is bad"), especially when divorced from facts and truth.

"Aqua Man" basically drowns in its own bathos. It sucks, and it's laughably bad.

In a word, ridiculous.

Posted by Arthur Christopher Schaper at 4:54 AM