This is as nutty as it gets.

"Abolish ICE" does not poll well with many voters, Democrat as well as Republican. 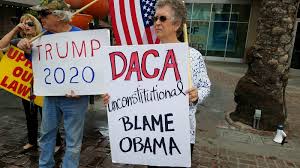 And yet, the Goergre Soros funded group United We Dream (rallying all the support for the nightmare kids and their illegal alien parents), wants to fundraise off this moral insanity.

Check out the latest fundraising call below:

Exciting news, Arthur: We have new Abolish ICE shirts and hats available in the UWD store!

SHOP NOW
They’re perfect to wear at rallies, marches, or anytime you want the world to know how you feel about this abusive and dangerous agency.
Since its creation in 2003, ICE has committed numerous and frequent atrocities: ripping apart families, abusing Black and brown bodies, setting up detention camps, and deporting immigrants. Yet, Congress continues to give them millions of dollars every year to continue these horrors.
We must do everything we can to fight back, and that starts with boldly showing our support for the Abolish ICE movement whenever we can -- so grab a shirt or hat today at the United We Dream store to show your support today.
All the funds raised from our store go directly to support our work abolishing ICE, building out deportation defense teams, and organizing immigrant youth communities across the country. I hope we can count on you to help us out in this critical moment in our fight.
With strength and gratitude,
Uriel and the rest of the team at UWD
Now this is just sad.

United We Dream faced their worst nightmare: they couldn't get any kind of DACA bill passed in Congress. They abused the legislative process, slammed and shamed their elected officials--actually, not their officials since many of them reside in the country illegally and therefore are not entitled to call these individuals their representatives.

They took over the US Senate cafeteria. They overwhelmed the offices of specific elected officials. They attacked good and decent people while screaming profanities at elected officials and their staffers.

And they got NOTHING.

This merchandising scam is beyond outrageous.

Does anyone really think that this is going to work?

The Angel Parents and their tragedies speak much louder than the sob stories of illegal alien parents who broke into the United States, knowing full well that they were putting their lives and the lives of their children at certain risk. Once again, where is the compassion for Americans, for the neediest citizens in our many communities?

It's time to focus on public safety and the security of our nation's sovereignty at all cost. We need to find a way to cut off the funding to this treasonous "United We Dream" group any way we can.
Posted by Arthur Christopher Schaper at 5:28 PM