Check out the depths of the corruption that has infected Hollyweird.

Check out what this creepy comic shared on his Twitter feed five years ago:

The angry "@" tweets from my hammer toed followers opened my eyes. "Pedo-phobe" shaming hurts us all. I am a PROUD pedophile!
— Patton Oswalt (@pattonoswalt) July 9, 2013


These kind of jokes are beyond unsettling. Hollyweirdos think that such sexual perversity in their joking is appropriate. The disgust is compounded by the fact that sexual assault against minors is rampant in Hollywood.

The 2014 documentary "An Open Secret" exposes how pervasive the perversion of child predation has become:

How many people remember Whoopi Goldberg, when she excused Roman Polanski's rape of a 14-year old? He has been on the run from justice ever since.

Whoopi dismissed the crime by saying: "It wasn't 'rape-rape'":

Here again, you can hear her defending rape:

Notice how Whoopi wanted to call Bill Clinton's victims the agressors, and then claimed that Hillary Clinton was the victim?

The shameful disregard for personal mores is impalatable.

Cultural conservatives are starting to win this fight.

Mike Cernovich can claim another scalp for taking down pedophiliac Disney Director James Gunn for thousands of tweets which endorsed and celebrated pedophilia. Click here.


What about Patton Oswalt? What about Whoopi Goldberg? When will they be held accountable?

Here are the sponsors for Goldberg's show "The View". Tell them to stop funding that terrible coffeeclatch claptrap until Whoopi is Good-bye: 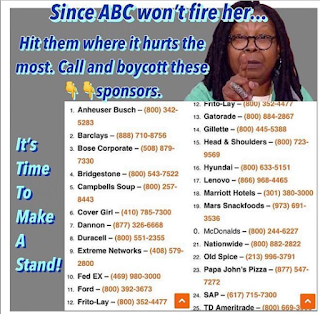 Oh brother. Another sick comedian has been outed as a creepy pedophile.


And here's some more from Michael Ian Black:


“We (Jared Fogle) used to molest kids together.”

“I don’t like watching ‘iCarly’ with my daughter because there is nobody on that show I want to molest.”

What is up with the left and pedophile “jokes”? pic.twitter.com/Z12NaKRLZ6
— Mike Cernovich 🇺🇸 (@Cernovich) December 5, 2017

Posted by Arthur Christopher Schaper at 11:47 AM