Lupe Morfin Moreno is one of the boldest anti-illegal immigration, pro-American activists in the state of California.

And she does this while living in another belly of the Beast, Santa Ana, California. This city has turned into the "Sh*thole" of Orange County. The homelessness problem is overwhelming, as little children struggle to go from school to home and even the civic center library. The homeless are all over the city.

AND ... Santa Ana is a sanctuary jurisdiction, and they doubled down on SB 54 earlier this year.

Lupe spoke out against sanctuary city police at the March, 2018 Orange County Board of Supervisors meeting, too. It takes a lot of courage for Americans of Hispanic descent to speak out against illegal immigration in the state of California. The growing Latino population has become more diverse, however, and more of them are supporting the rule of law and security of our borders. Still, a majority of Hispanic voters are leaning toward promoting amnesty and disregarding the federal government's enforcement of immigration laws.

Lupe Morfin and her sister Angie (whose son was murdered by an illegal alien) are fighting back against this lawlessness. They love this country,  the United States, and they do not want their country to turn into a lawless, chaotic, third-world ghetto.

In Santa Ana, Lupe celebrates Independence Day. She sets up a walkway of history, and visitors can meet with different people who represent the Founders and other famous historical figures.

In the last two years, however, La Raza activists and other Brown Supremacists have been harassing visitors to the main park in Santa Ana. It's unbelievable how vile ... and violent ... these hatemongers have become. Last year, I went as John Adams to the event, and the Brown Supremacists showed up to throw a constant disruption of the event.

This year, they showed up again, disturbing the events and shaming everyone who participated in the celebration of our nation's founding and history.

Check out Lupe's account below, with more information to come:

An American story: about 2005, I came home from protesting and protecting the California and Arizona border. It was American Independence Day and I asked my children if we were going to go to the parade and spend the day getting ready to go to the night celebrations. Which my children told me the City of Santa Ana no longer celebrated America's birthday. I was shocked, so I asked what we do. Bar-b-que and safe fireworks. Bar-B-que was ok, but the fireworks were not anything safe. The city turns into 4 hours of illegal fireworks with mini bombs. The Spanish speakers call it the night of the fireworks in Spanish.

I started asking city officials and everyone I could ask, why!. Why did they stop celebrating America's special day? Over and Over no answers. But I found other Americans that were just as worried as I was. The Mexican government was becoming very powerful in our city. The city of Santa Ana not only had a Mexican consul in the city, but these agents of Mexico went to all the city's events. I was always running into them. Then I found the city of Santa Ana was throwing a three day Mexican Independence Day celebration on Sept. 16. with Ferris wheel, carnival, live music and a huge parade. They close multiple streets to put on this Mexican party.

So after years, of asking a friend and I, two single mothers put our money together and put on the first Annual American Independence Day event in 2008. They didn't make it easy, but we did it. 8 years ago, we had Mexico's seed go to the city council and say how could they let a racist like me and my friends put on American Independence day. So the city of Santa Ana decided to put on the event. They asked people, especially the big mouths to come and help put on the event. The only ones who showed up were me and my group. "LIBERTY PATRIOTS" 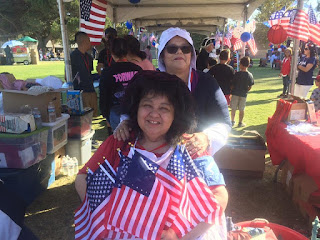 So yesterday [July 4th, 2018] was American Independence Day and for the last 10 years, I have helped put on a celebration for our great nation in the city of Santa Ana, CA. It takes me a whole year of talking to people about the importance of celebrating America's birthday. And this is not a one-woman doing. I tell friends who tell friends and everyone starts getting me the things I need. I have collected everything RED, WHITE, and BLUE. I ask perfect strangers and friends to dress up as history heroes (George Washington, John Adams, Thomas Jefferson, Abraham Lincoln, Ben Franklin and others. Women in historical dress. Important to our great nation. And they come on their days off to our event. (God bless them). We try to have Constitutions, Pledge of Allegiance. Big things and little things that we love about our nation and history. We put on an American History Walk. We give the children passports to take to the booths we set up with different re-enactors. "A Walk Through History". It becomes glorious and beautiful.

This year was the first time most of my family was with me. My mother, children, and grandchildren.

Last year I had a friend that is a good man come and play John Adams and we had protesters who hate America. Hate our way of life, hate it because God has BLESSED OUR NATION, because they did not like his freedom of speech, for 4 hours they attacked him over and over, with his booth surrounded by the policemen. The police had to take him to his car. For his own safety, I did not ask him to come this year.

I had worried and worried about getting people to come out and help us. Some people called and canceled. Thank you to those that came. I will always be grateful.

But the Americans haters came back and stood in front of me and called me a RACIST BITCH and so many more ugly things in front of my family. I was surrounded by policemen and city staff. They made my younger grandchildren weep. My older grandchildren already knew what they were about, so they just keep volunteering. We made hundreds and hundreds of children and adults happy. They did have a very good picture of me, but I wonder where they got the money to make it into color posters. Ink cost a lot of money.

FYI: for anyone who does not believe that the Brown Supremacists want to shut down the celebration of our nation's birth and founding, look no further than the post below:

I left for a while to use the restroom and they chased the cart I was in. My children wanted me to go home but knew better than to say it to me. How could I leave my volunteers? My children suggested, but I went back and took another 1 1/2 hour of ugly hate Americans in my face. Finally, it was just getting uglier and uglier. Friends wanted to go charge them. George Washington started to defend me and if the policemen had not gone in front of him, they would have jumped him and beat him. So surrounded by police and city staff I was driven to a safe zone. I did not get to enjoy the evening with my family. But I can proudly say hundreds of families and thousands of people learned a little about American history and about our great nation.

Here is to the Santa Ana City staff, the policeman, my family, friends and all those who helped us with 2018 American Celebration. GOD BLESS AMERICA!!!

I don't know how to use these fancy cameras. So I took a lot of pictures, but don't know if any came out. If they did, I will send.

This is the insensate bigotry which Lupe Morfin has to put up with. The Brown Supremacy, much like the white supremacy of their predecessors in the Ku Klux Klan, want to drive out the vast majority of residents who are not Brown, who love the United States, who believe in the rule of law, and love America in every way.

They have made her grandchildren cry. They harassed her son, who has physical handicaps. They call her all kinds of racist, abusive names. This hatred from the regressive, open borders, Brown Supremacy Left must be confronted in every way possible.

Check them out below. This better portrays them, without a doubt.

Posted by Arthur Christopher Schaper at 11:21 AM