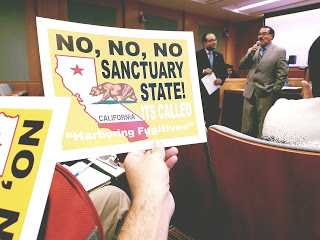 Most of the pro-enforcement activists went to Temecula, but two other cities voted to oppose SB 54, too. I have already written about Vista, CA, but another city in Riverside County also opposed SB 54:

Here's a report from the local paper:

The City Council voted unanimously Tuesday night, June 26, to draft a letter similar to one the city of Yucaipa penned stating opposition to the law, which provides protections for undocumented immigrants.

Notice the perverse bias of the press. SB 54 does not protect anyone except criminals!

Illegal alien criminals specifically, although anyone who enters illegally or resides unlawfully in the United States is already criminal to begin with,

The council voted after hearing from eight public speakers — seven opposed to the sanctuary law — in front of a packed audience showing their support with enthusiastic clapping.

Wow! A handful of speakers, but an audience full of support. This goes to show that whatever perverse animus that the liberal media or the open borders lobby tries to push, the rule of law will still prevail.

“I am opposed to sanctuary state,” resident John King. “Protecting criminals has never been a value in California.”

Councilman Dan Mintz said it is about values.

“It boils down to right and wrong,” Mintz said. “Coming into the country illegally is wrong!”

Yes. Why is this an issue with so many people still? Why don't they get it?

“Bottom line, absolutely nothing will change with patrol operations. However, we are uncertain as to what, and if, there could be any implications with federal funding due to this law that is contrary to the current federal administration,” he wrote in a staff report.

The fact is that the more illegal aliens are roaming the streets, the greater the dangers to citizens and peace officers. The politicking from police chiefs is really disgusting sometimes. They need to think about the safety of the committee and the citizenry, not just their jobs.

Once again, the newspaper refuses to mention that illegal aliens are criminals, and SB 54 protects the criminals who have committed other crimes, too.

The law prohibits police in California from helping immigration officers detain immigrants accused of most non-violent crimes, though police remain cooperative with federal authorities when it comes to holding people accused of violent crimes, multiple drug and alcohol offenses and hundreds of other exceptions, according to city staff reports.

Carol Giannini, who voiced her opposition to sanctuary laws, asked Mayor McArthur Wright to read the letter from the city of Yucaipa out loud, which he did after her comments.

“Unfortunately, the state leadership in Sacramento has taken various positions in response to national policies that leave Yucaipa’s citizens in the middle of a battle between the state and federal governments,” Wright read from the letter.

City Councilman Joel Klink, who said, “I do not like the idea of a sanctuary state or a sanctuary city, asked for the letter to be sent to those government officials and President Donald Trump, too. The other council members agreed.

Councilman Steven Bilderain agreed and said safety for his city is a top priority.

“I am not for sanctuary states or sanctuary cities,” Bilderain said. “That is where I stand. We’re standing with the other cities.”

Studies of crime statistics have pushed back against the notion that sanctuary laws lead to more crime. A UC Riverside study in 2016 compared crime rates in cities across the country and found there was no correlation between crime and sanctuary policies.

More lies. Sanctuary jurisdictions invite crime. Ask Kate Steinle ... except that no one can ask her anything, can they?

“Our findings provide evidence that sanctuary policies have no effect on crime rates, despite narratives to the contrary,” the report stated. “The potential benefits of sanctuary cities, such as better incorporation of the undocumented community and cooperation with police, thus have little cost for the cities in question in terms of crime.”

Illegal aliens should not be incorporated into any community. They need to be deported from the country. Period.

“It’s bad all the way around,” Cole said. “I’m not interested in a sanctuary state.”

Wright rounded out the opposition.

“I’m not for us being a sanctuary city,” Wright said. “It is important for this Council to take a stand.”

CJ Horne, a Twentynine Palms resident, posed the question, “Why does the government want a sanctuary state?” Horne said it is all political trickery: “It gets the Democrats prospective voters.”

San Bernardino County Sheriff’s Lt. Mike Barta was in the audience, but did not speak
publicly. 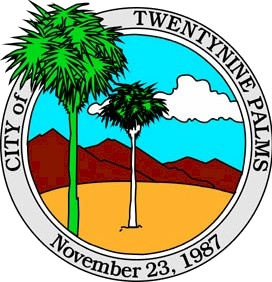 This article was not only notoriously biased, but flawed and just plain wrong. The press is supposed to provide evidence objectively. Who said what, and what conclusions did the city council choose? The outcome of the city council does demonstrate, however, that the local and even the national press has less of an effect on swaying the opinion of elected officials, and it certainly has not stopped the citizens from speaking out against the perverse lawlessness of Sacramento.

The press is losing, the people are winning, and the principles of self-government, individual liberty, and the rule of law are carrying on.