WINNING! The Village Voice Savages Me Over Socialism

You know you have arrived when the New York City version of LA Weekly and OC Weekly savages you in one of their articles. Specifically, they targeted me for what I had written about Alexandria Ocasio-Cortez' upset victory in the Bronx Congressional district last month. 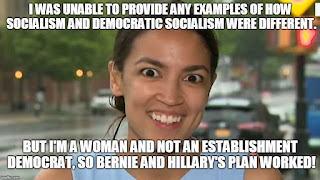 At TownHall, Arthur Schaper visibly recoiled from Ocasio-Cortez’s platform — “she calls housing ‘a right,’ ” gasp! — and claimed “the left tends to cannibalize itself when the younger generation demands socialist outcomes at a faster rate,” citing as examples, I shit you not, the French and Russian Revolutions, plus Walter Mondale. Schaper declared that “the Trump Administration’s regulatory rollback and tax reforms have unleashed unprecedented wealth, prosperity, and opportunity,” which he predicted would lead, despite Trump’s lousy poll numbers, to “a 49-state victory.”

I had written, in line with the views of many people on the center and the right, that the upset victory of Alexandria Ocasio-Cortez showed that the Democratic Party has gone too far to the left. They are not listening to the everyday concerns of American citizens. They ignored the incalculable damage wrought by President Obama against his own party during his two terms in office.

The younger, entitled, engaged, and enraged left-wing base what the hope and change which Obama promised RIGHT NOW. Like the violent, bloodthirsty partisans during the French Revolution, they have no problem with resorting to destruction of life and property in pursuit of their Marxist aims.

The truth is that this radical, Marxist turn within the Democratic Party should scare Democrats in particular and worry the country in general. People need to wake up and realize that wealth cannot be obtained by stealing from others.

Free markets, free enterprise, and free people ensure the most equitable, lawful pathway for all to get wealthy, to prosper, and to be in health.

And for the record, the Nazis were socialists: