He grapped the kid's MAGA hat off his head, pulling some of his hair in the process, then tossed a soda in his face. Then he walked off stealing the hat. He also killed "nigger", then laughed that he was going to throw the MAGA hat in his fireplace.

Here's the criminal exchange caught on Richard's video below:

Liberal #KinoJimenez assaults teen by tossing a drink with ice at the kid’s face at a Whataburger in San Antonio. Hunter Richard was eating when Jimenez showed up yelling about #Trump and took his #MAGA hat off his head and yanked some of his hair #q #qanon #TheGreatAwakening pic.twitter.com/5FAtclWHjl
— Matt Mendrun™ (@MendrunMatt) July 5, 2018

These left-wing bullies will target the people whom they think are the weakest, who will say nothing and just put up with this abuse.

Those days are over, and conservatives across the country are not going to take this abuse anymore.

The video went viral all over the country and social media.

People were able to analyze and expose the creep.

Here's one of his profiles: 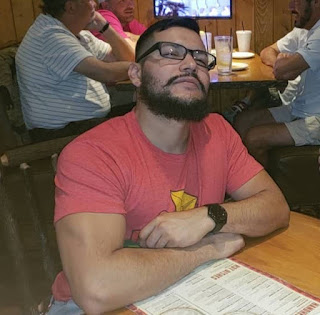 But justice was swift against this La Raza thug.

Within hours of this incident, the bar where he worked terminated him.


A Texas bar fired a man who allegedly stole a Make America Great Again hat and threw a drink in a Trump supporter’s face on Wednesday.

Rumble, a bar in San Antonio, released a Facebook statement after a video of the harassment went viral. The bar denounced the part-time employee’s behavior toward 16-year-old Hunter Richard at a local Whataburger restaurant.

“THIS BAR IS A SAFE SPACE FOR EVERYONE!” the post read. “No matter your race, creed, ethnicity, sexual identity, and political stance, you are welcomed here!”

Interesting to hear that a bar wants to be a "Safe space", but at least they took the necessary steps to get rid of the 30-year old boy man.

But it gets better.

Later, Heavy.com reported that Jimenez was a member of the Texas Green Party. This group has become the new homeland for disaffected progressives who are tired of the Democratic Party establishment. This alone should clue us to how radical Jimenez has become.

"Was a member" is the proper phrase, too, since the Texas Greens ended up kicking him out of the state party, too:


The man’s name is also Kino Ahuitzotl Jimenez, and he previously wrote negative comments about Trump on social media. A now deleted page had him affiliated with the Texas Green Party. However, a leader in the Texas Green Party told Heavy that the party has now banned Jimenez because of the video.

July 5th, I contacted the Brexar County District Attorney's office. One of the staffers informed me that they know about the assault against the 16-year old, but they had to wait for a criminal filing from the San Antonio police department.

I then called the police, and one of clerks informed me that the police were already investigating the assault.

Today, the public learned that they police arrested the thug.

Police have arrested a 30-year-old man for allegedly stealing a 16-year-old boy’s “Make America Great Again” hat at a Whataburger in San Antonio after video of the encounter went viral.

Kino Jimenez was taken into custody “without incident” in Universal City, Texas on Thursday, according to San Antonio Police Department spokesman Carlos Roberto Ortiz. Jimenez was interviewed by robbery detectives and transported to Bexar County Jail. He will be charged with "theft of person." It was not immediately clear if he had an attorney and a possible phone number for him was disconnected.

Despite shaving his face and cutting his hair, Jimenez could not evade the police or avoid arrest.

He faces 2-20 years for not just stealing the hat but assaulting a minor.

Not only is Jimenez facing swift justice for his crime, Donald Trump Jr. pledged to get the young MAGA teen a new hat, signed by the President!


This is an incredible turn of events.

For the last two decades, left-wing social justice warriors, activists, and agitators have gotten away with abusive and violent disrespect against anyone who disagreed with them. Now that President Trump is in the White House, and the conservative MAGA agenda is spreading, people on the right, pro-American nationalists, conservatives, and common-sense Americans in general are pushing back against the Left's Stalinist thuggery.

Bad reporters who lie on air are getting fired.

Independent researchers and media sites are reporting the undercover information against Big Labor, Big Business, Big Government, and Big Tech which legacy, corporate media sources have not only ignored, but deliberately buried.

The press covered up and even applauded the violent protests of Antifa, La Raza, and other regressive Leftist social justice warriors.

Now, those same corrupt, bullying, evil actors are getting swift justice, first on social media, then in the private sector, and finally in a court of law.

The arc of moral universe is long, wrote Martin Luther King Jr, but it bends toward justice. This year, and under this administration, true justice is being meted out for conservatives, for Americans of all stripes, for men and women who want to live their lives in peace and express their views without reprisal or rebuke.
Posted by Arthur Christopher Schaper at 4:30 PM