This is how insane the Left has become.

They are devouring each other. They are demeaning some of their most ardent advocates because they are too white, too straight, or too "mainstream." When institutions wanted to accommodate these radical Marxist movements, little did they realize that there would be no assuaging or pleasing this perennial, preening, demanding, and dangerous crybabies.

Scarlett Johansson induced a massive backlash when she announced taking on a role as a transgendered person.

Scarlett Johansson announced on Friday she is dropping out of the starring role in Rub & Tug, a film about a transgender man who ran an extensive prostitution ring during the 1970s and '80s.

After an onslaught of criticism over the past week, actress Scarlett Johansson announced on Friday she will be pulling out of the starring role in Rub & Tug, a film based on the true story of a transgender man who ran a ring of prostitution fronts. 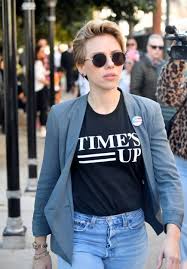 "In light of recent ethical questions raised surrounding my casting as Dante Tex Gill, I have decided to respectfully withdraw my participation in the project," Johansson said in a statement to Out.com.

What? Ethical issues? The real ethical issues revolve around the basic lie that transgenderism should be treated like a civil right rather than a destructive lie.

"Our cultural understanding of transgender people continues to advance, and I've learned a lot from the community since making my first statement about my casting and realize it was insensitive," the actress added.

Oh brother? Insensitivity abounds with the perennial victims who have gotten away with blaming everyone else for their feelings.

Transgenderism should not be accommodated in any way, shape, or form. But this cowardice is par for the course with Hollywood. Movie executives did nothing when Harvey Weinstein and company were raping women, but they will do everything in their power to make sure that gender dysphorics don't feel offended.

She lamented turning down the starring role but acknowledged it has served as a catalyst for a broader conversation about transgender actors in Hollywood. "While I would have loved the opportunity to bring Dante's story and transition to life, I understand why many feel he should be portrayed by a transgender person, and I am thankful that this casting debate, albeit controversial, has sparked a larger conversation about diversity and representation in film," she said.

How crazy did the hyperbole become?

Actress Trace Lysette aired her frustrations in a string of tweets, writing, "Not only do you play us and steal our narrative and our opportunity but you pat yourselves on the back with trophies and accolades for mimicking what we have lived."

That's what acting is!

Following the initial hostile reception, Johansson had defended the casting by noting several famous cisgender people had won top prizes for past performances.

This latest downfall for a Hollywood actress to play a role is good news for the pro-family movement, however.

How much longer will the general viewing public continue to view transgenderism with any kind of sympathy and respect? The movement is based on lies, and its most fervent adherents are narrow-minded whiners who want everything their way and refuse to compromise on ... anything.


Now we have to wait and see how far this demand for absolute intersectional perfection will go:

Posted by Arthur Christopher Schaper at 12:07 AM