Yes, she pushed her liberal bias into the story, but still it's worth looking at the report, and taking note that MassResistance made the difference!

Here's the report below:

Protesters on both sides of the LGBTQ rights debate converged Tuesday night on Dixon City Hall to voice their support or opposition to the words of embattled Vice Mayor Ted Hickman.

Hickman roused ire when he published a piece in the Independent Voice newspaper about homosexuality, calling for Straight Pride American Month (SPAM) and referring to gay people as “tinkerbells” and “faries” (sic).

Once again, this is a total fail. The homosexuals in those gay pride parades dress like that, and that is exactly what Ted Hickman wrote.

The Recall Ted Hickman group mobilized about 75 people to show up at the council meeting for a “pizza party” on the lawn in front of the building to reiterate their opposition to Hickman’s words. They sat on picnic blankets and played songs on their phones like “Over The Rainbow” and “Born This Way” by Lady Gaga.

It sure didn't look that way.

A “Dump the I.V.” (Independent Voice) station was set up for people who wanted to stop receiving the newspaper involuntarily.

Why does the Left go out of its way to silence and demonize people whom they disagree with? They can't win on the merits of their ideas. They have no logic to back up their assertions.

The group MassResistance, which says it is a “pro-family” group opposed to gay marriage and homosexuality’s affect on children, also organized a protest, drawing about 10 people to the meeting.

With enough prodding and pressure against the press agent, she wrote the truth about us and what we are doing. We are indeed a "pro-family" group. There is no family apart from one man and one woman giving birth to children. When Katy St. Clair had interviewed me the week prior, she told me that she refused to write "pro-family", since gay people have families, too.

No, they don't, certainly not in the natural, biological sense.

“I’m here in opposition to the LGBT agenda,” said San Leandro resident Don Grundmann, a member of the Constitution party who ran for president in 2016 and the senate three times.

Asked if he supported Hickman’s use of pejoratives to describe gay people, Grundmann said that it was a “cover story.” 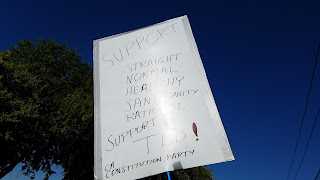 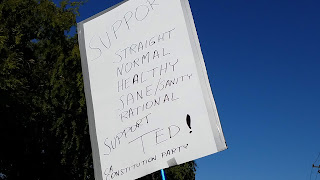 Grundmann said that Hickman’s idea was in opposition to “Sodomite pride marches.”

Most vocal was California’s MassResistance organizer Arthur Schaper, who carried a “one man, one woman” marriage sign. Schaper confronted protesters on the other side and journalists, and he filmed the entire event on a hand-held camera. Schaper asked people why they would “get a man fired” for exercising his First Amendment rights.

“What happened to Love Trumps Hate?” he asked a counter-protester.

Schafer attempted to talk to Councilman Devon Minnema, asking him about comments he made to The Reporter about how most of the counter-protesters were not from Dixon, and why that mattered. Minnema demurred and made a hurried retreat, with Schafer calling out, “He needs to really pick it up if he wants to lose some of that weight.”

As Schaper confronted more people, the Recall group began singing “If You’re Happy and You Know it Clap Your Hands.”

At one point Schafer attempted to film Vacaville City Council candidate Rovante Robinson, who asked not to be filmed. Schafer continued, and Robinson approached him with his palm out to cover the camera. As their words ramped up, a police officer broke it up and pulled Robinson aside.

The MassResistance group eventually moved into the council chamber, awaiting the meeting. People from Discovery Bay, Oakley, Sacramento, and Alameda jointed their ranks. Schafer continued to film and raise questions, rousing some of the crowd enough for a man to confront him for his words.

Once again, she spelled my name wrong.

Amelia Lacey, 14, sat near the MassResistance crowd unaware of their stand, and said that she was shocked at their commentary. As she listened to them discuss the health hazards of homosexuality and hold up pictures of men dressed as fairies in gay pride parades, Lacey, who is gay, began to cry.

A 14-year-old is already gay? This is crazy. Where are the parents?

“Fake tears!” said a woman sitting with the MassResistance group to Lacey.

“How lowball do you have to be to come after a 14-year-old girl?” asked Lacey.

"How lowball"? I almost doubt that someone said such a thing in the city council chambers.

At this point the Dixon Chief of Police came over to chastise the chamber, asking that any comments or discussions be moved outside. Things were quieted for a bit but then Schafer began to engage people again, prompting the chief to ask him to step outside. Moments later he returned to his seat, where he waited for the meeting to begin.

The chief of police was trying to intimidate me, but I refused to be shamed or silenced. I had every right to speak. I had every right to talk to other people in the city council chambers. When I told him that I wanted to ask a question, he asked me to step out side. The people in the audience cheered briefly, probably thinking that I was not going to be coming back.

Once outside, I simply asked the police officer for his badge number (at the time, I did not know that he was the chief of police.) He answered me, and then I proceeded to enter back into the city council chambers.

The police chief looked pretty stupid at that point. Marco told me that it was an intimidation tactic, nothing more.

During the public comments portion, several people voiced that they were disappointed that the city council still had not made any decisions of how to handle Hickman’s article. Some hoped that the body would censure him. Without dismissing the idea of censure, City Attorney Douglas White said that the city had to consider possible litigation and that a few groups had contacted him and said that they would raise First Amendment suits if Hickman was punished.

The main issue rested on the fact that Vice Mayor Hickman could pursue legal action if he wanted.

Several people took to the microphone to support Hickman during the public comments.

YES! This it what activism is all about! We make a difference in the public, and then we force the press to cover us, even if they do not agree with us nor do they want to promote our point of view.

Randy Thomasson, president of the Campaign for Children and Families, came from Sacramento to address the council.

“It’s basic fairness if there is an LGBT pride parade or day, that a straight or natural pride day must also be permitted,” he said. “For years, LGBT activists have said, ‘Accept our alternative lifestyles.’ Now the tables have turned, they won’t accept any alternatives to their day and that’s not fair in America.”

Other Hickman supporters expressed the importance of the First Amendment and said that they stood with him but they also discussed the “dangers” of homosexuality.

I made that point, and I even gave the city council a copy of the "The Health Hazards of Homosexuality":

Publisher of the Independent Voice, Dave Scholl, said he was the “object of a lot of hatred here.” But that he supported a lesbian for the senate, Tammy Bruce, asking if that made him prejudiced toward gay people.

Yes, indeed. Dave Scholl and Ted Hickman write for the Independent Voice, a conservative-leaning newspaper that actually believes in freedom of speech and the press. The hatred directed at them was incredible: 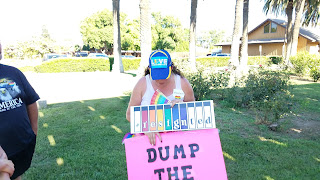 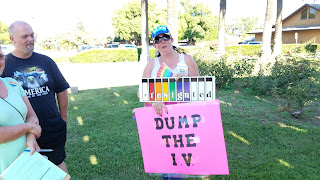 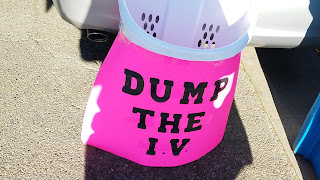 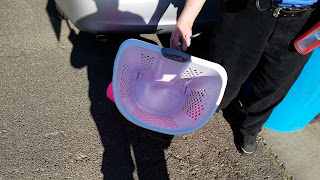 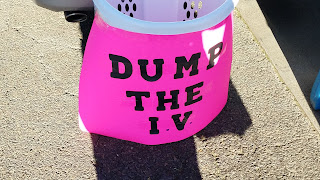 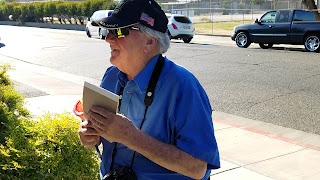 Resident John Stalnaker said that he was moved to speak after hearing the Hickman supporters.

“I would like to speak up as a conservative Christian straight man. Ted Hickman and his cronies do not speak for me… God tells me to love people, judging them is above my pay grade.”

"His cronies" ... that doesn't sound very Christian, now, does it?

At the end of public comment, each councilman asserted that they did not support Hickman’s words, with Mayor Thom Bogue asking the city attorney to draft a resolution stating that the council is in opposition to Hickman’s article and that it “doesn’t represent our voice.” Hickman also addressed the crowd, saying that he appreciated how both sides of the argument seem to respect the First Amendment, and left it at that.

How about that? Vice Mayor Hickman was not afraid to speak the truth, and he was not afraid of people in the city to speak against him because he wrote the truth about homosexuality, transgenderism, sodomite parades, and all the rest.

I do want to draw attention to the startling fact that the reported Katy St. Clair spelled my name two different ways in three paragraphs. How bad can the editing be? I was beyond astonished. Doesn't anyone care about the journalism profession anymore?

It was fun slamming the reporter and The Reporter!

The LGBT bullies weren't prepared for counter-protests, and the "Recall Ted Hickman" protesters couldn't even muster enough people to push back on the city council as a whole.