The Slippery Slope is Real: Young People are Waking up to Destructive LGBT Agenda

As the LGBT Agenda presses ahead to undermine the civil rights of all and attack the natural rights on which are country is based, more people are starting to wake up to how destructive the whole homosexual-transgender movement has become.

From MassResistance to the California Family Council to Focus on the Family, and even the Christian Broadcasting Network headed by Pat Robertson, Christians, Biblical authorities, pastors, and proponents of Biblical morality have warned everyone about this moral deluge.

The whole homosexual movement was not about finding parity or equity for a group of people engaged in some benign eccentricity. The destruction of marriage falls into a communistic agenda intended to undermine the very underpinnings of our culture.

It's a destructive agenda which had set its targets on children, on future generations. It's darkened tyranny wrapped up in a warped rainbow based on lies, all of which demonize opponents and critics as backward bigots and homophobes.

Frankly, there is no such thing as homophobia, since a phobia is a mental disorder, fears based on falsehoods. The destructive nature of homosexuality, transgenderism, and the fetish-like outpourings from this anti-family cult have been clearly defined. Men and women have a right to be concerned about this movement and want to see it delegitimized.

I have more hope as the aggressive nature of this moment pushes further into the mainstream forefront of our political discourse.

Consider the reactions to this hideous "music video" promoted by noted humanist and would-be scientist Bill Nye. The video featured Rachel Bloom singing "Sex Junk." The singing was bad, the dancing was terrible, the message was the worst. The notion that people can sleep with whomever they choose, and that they consequences do not matter, spawned this amoral MTV dreck.

Here are some of the comments which appeared underneath the original video on YouTube. As a disclaimed, I am merely guessing that many of these comments come from younger views, Millennial and Generation Z types, since the video was originally designed and designated for that audience:

"This video turned me into a God-fearing conservative."

"I'm ordering a Bible a Torah and even a Q'ran and I am typing this. I need God now more than ever."

This comment was the most outstanding, merely for its bold statement, but also because it's a welcome admission:

"I ... I'm sorry Religious Right. You were right about the slippery slope. You can tell me I'm going to Hell all you want, and I'll just sit and take it. Just please come back and get rid of this." 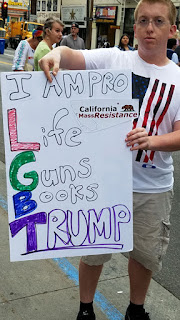 Even confirmed atheists had to admit that moral abyss which modern media is trying to force onto our culture:

"I have always been an atheist from a young age, but I feel the need to wash my eyes with holy water and initiate another crusade after watching this."

"I'm converting to Christianity. I don't even believe in god, but I'll make it work somehow."

"As an atheist who passionately debated the religious right in the mid 2000s ... I'm sorry, please come back.

And some other interesting remarks in reaction to this candy-flossed disgust:

"Maybe I should start going to church again."

"I'm not even joking. I wish my parents brought me to church like their parents did. Now that I'm 20 years old, I think I should start going on my own."

Indeed, a sense of right and wrong remains inescapable for young people, no matter how much their peers, the media, and academia want to denounce Western Civilization and Judeo-Christian values.

Here, Allsup admits that as a teenager, he had treated the whole gay marriage/homosexuality movement as "Live and Let Live". After all, as long as what individuals are doing with their bodies is not harming others, why should anyone object, right?

"I used to laught at the Christian fundamentalists, who warned of a slippery slope."

Hey, at least he's honest about it. He denounced advocates for Biblical morality and natural marriage because they were arguing from the "slippery slope fallacy." 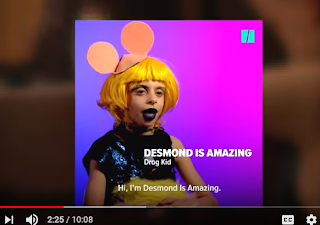 Today, Allsup acknowledges that the slippery slope is real. MassResistance Brian Camenker declared as much when he described in painful detail what happened in Massachusetts when the state Supreme Court shoved gay marriage down everyone's throats in the Commonwealth. Click here.

"Fast forward now to the current year, 2018 ... back in my libertarian days, I was a firm believer in the non-aggression principle. People should be allowed to do whatever they want, as long as that action does not agress upon another person's liberties."

And therein lies the problem with the whole LGBT movement. The arguments to promote homosexuality, transgenderism. gay marriage, and other paraphilias necessarily transgress the rights of others.

"It was never really about consenting adults. The sexual revolution is being extended to children as well."

Allsup then showcases Huffington Post's abusive interview with a young boy who is playing up as a drag queen. This is horrendous. This is child abuse, just like forcing children to take hormone blockers and succumb to surgeries to change from one sex to the other.

"The left is endorsing the sexualization of children."

Once again, the Slippery Slope is real.

The whole mentality of excusing degeneracy with “as long as it’s not hurting anyone” or “as long as it’s not taught to my kids” is the exact mentality as to why we have LGBTQ history taught in school now & 9 year old drag queens. Stop allowing them to denigrate our kids future.
— Irma Hinojosa 🇺🇸 (@irmahinojosa_) July 12, 2018


The argument "It won't hurt anyone" is a lie. Let's consider the whole LGBT Movement within the light of the Cigarette Industry. They had claimed for decades that their products carried no ill side effects. Yes, they do. Now, one could argue that men and women (adults) should be free to smoke. Yet no one would think of promoting cigarette smoking as some kind of civil right or special identity. The behavior is now viewed as deviant and destructive, not promoted or accommodated.

The same should be true for same-sex behaviors and transgenderism. These are not behaviors and ideas to celebrate, but to discourage, and it's time for parents, schools, and our broader prop culture to celebrate the nuclear family, natural marriage, and the wholesome life of children as well as adults.

Young people are waking up to the destructive LGBT Agenda. And that is good news. 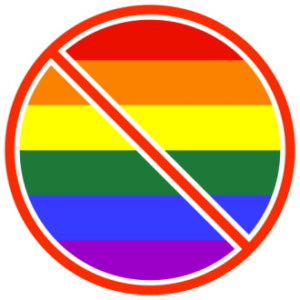 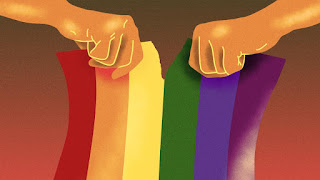