In the well-known Christmas Carol "The Twelve Days of Christmas", January 5th is the Eleventh Day, and on this day, the True Love gets Eleven Dancers Dancing.

For We the People Rising, who expected to attend a regularly scheduled city council meeting on January  5th, we saw elected officials, city leaders, and office staff tap-dancing, sprinting, fleeing left and right, seeking to escape from our demands for justice, for the rule of law, and for leadership in Huntington Park which puts Americans first.

Despite the cancellation notice from the city website (which actually displayed conflicting information up to January 4th, 2016) We the People Rising arrived, with festive cheer, ready to celebrate the Christmas season and a Happy New Year.

Part of our plan for the evening included speaking with the Huntington Park City Clerk, Donna Schwartz, to get more information about why the city council held a special meeting on December 23rd (one which the residents never learned about until after the meeting had started, or two days after it ended). The city clerk then informed me on December 30th that there would be no city council meeting on January 5th, either.

Why would the city council host a surprise meeting one day, when they could have waited until the regularly scheduled meeting in the new year? The city council met three times -- three! -- in December, and two days before Christmas. Very weird.

Then it got stranger, uglier, more perverse, as more of our team arrived at city hall.

While approaching the building from the parking lot, lo and behold, I saw Mayor Karina Macias' big, shiny, white Toyota (or Prius?) in her customary parking lot!

She was able to make it to city hall that night, yet the meeting was cancelled.

Are you confused? I sure was!

In city all, I asked members of our team to gather around the piano in front, next to the main service desk on the first floor. One of the illegal aliens, Julian Zatarain, paraded his arrogant ambitions in a flagrant photo op with the Los Angeles Times:

So, I pledged to take back the city, the city hall, and even the piano in the main lobby: 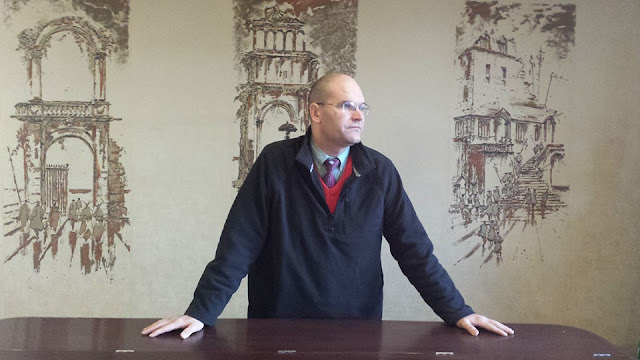 Over the next fifteen minutes, more of our group arrived.

Then the city clerk came out front.

"You probably want to know why the council meeting was cancelled."

At first, I was interested in keeping the discussion civil and on point. Schwartz ended up tapdancing around our questions for the next ten minutes. She first explained that the city managed called for the January 5th City Council meeting to be cancelled. "I just followed orders", Schwartz told us. She would refer to this justification a number of times.

It took me a while to take in what she was sharing with all of this. At times, it seemed as if the city clerk was trying to keep contrasting stories straight. Is she hiding something? "You take orders form the mayor and the city council, don't you?" I asked. "I take directions from the city manager. He's my boss." She then reminded us that the city council tells the city manager what to do.

Once again, we were listening to difference actors within the same corruption pass the buck and put the blame on someone else.

At one point, I asked about Mayor Karina Macias, since she was in the building, and her car was in the parking lot. "Her office is right over there." the city clerk pointed toward the side of the hallway. While Newman continued questioning the city clerk, specifically about the distorted and inaccurate minutes recorded for previous public comment sections, I spoke to the Mayor's secretary.

"Where's Macias? We know that she's here. Her car's outside."

"She's not available," the secretary answered me. Politely, I reminded her that the mayor's car was parked outside. "She's in the building, but she can't see anyone right now."

The secretary then left the office to go look for her, I suppose, although not really. As more of We the People Rising showed up at city hall, I told everyone that Macias was there.

More of us congregated outside of the mayor's office. The whole thing turned sordid and disturbing.

I returned to Dr. Newman's conversation with the city clerk. She then broke off and walked away. 'I am not giving you permission to record me!" She told me, as she ran off to hide in her office.

The city hall is a public building. We do not have to get permission to record. It is amazing to me the lengths that Huntington Park officials will go to in order to silence concerned citizens. When people know their rights, there is no stopping them.

We waited outside the city clerk's office for about five minutes. I spoke with three resident who live in and near the city. None of them knew about the sudden city council meeting called on December 23rd. One of the clerk's assistants offered to check on the city clerk, to see if she was available.

Really? She was available for fifteen minutes to talk to Robert Newman and myself, along with other members of our team. Then suddenly she runs off and tells us that we do not have permission to record her.

After waiting in the space outside of the city clerk's office, I walked back toward the mayor's office. The Mayor walked out of another door down the hallway with the city manager. Cisneros was in the building too! Macias ran into her office, and Cisneros walked down the hallway toward the back exit. Betty Retama, Robin Hvidston, and I followed after him, asking why he had cancelled the January 5th city council meeting.

"I have work to do," Cisneros answered while fleeing from us.

"If you have work to do, why did you cancel the meeting?" I called back. Retama and Hvidston followed from behind, calling out after him from behind the closed door. The whole building, doors and all, is public property. Yet the doors are opened for the illegal aliens, every entryway is slammed in our faces.

He rushed into the second story of the building, and forcibly closed the door on us, even while Betty had her hand on the door handle.

These politicians leaping and fleeing from us: the whole thing is a sad yet funny reality show, a Christmas Comedy of Errors. Merry Christmas!

We didn't let one door slammed in our face deter us. We ran down the stairs and back through the front entrance, with almost ten minutes left before city hall officially closed. Running back to the second floor, we gathered around one of the city manager's offices. We knocked a few times for someone to answer. At the next door, John Ornelas, the former interim city manager, came out and asked what was going on. As if! We told him that we wanted to speak to the real city manager. "He's not here," Ornelas lied to us. "We saw him run down the hallway into the office!" We all fired back.

"Oh, well he's working on something in his office." Ornelas then got huffy, told us not to yell at him, or he would leave. The only problem, however, was the he had locked himself out of the city manager's office by accident! Ho! Ho! Ho! 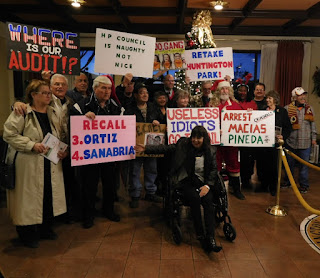 He escaped quickly as soon as the door opened. All of us upstairs posed for photos in front of the closed city council chambers, then moved downstairs for a few more takes in front of the Christmas Tree. Steadily, the remaining city staff -- those who do not collude with elected criminals to break the law and stifle freedom of speech and open government -- began shutting down doors throughout the building. While We the People Rising were taking pictures, I knew that Mayor Macias would flee into her Prius and drive off.

With the city hall shut down for the evening, We the People Rising rejoiced that we have kept on the pressure, and had fun doing it. The city clerk found herself in the unenviable position of explaining to us why she was posting surprising meetings two days before Christmas, then cancelling a regularly scheduled meeting one week later.

To see politicians fleeing - what a gift for concerned citizens fighting to take our country back. 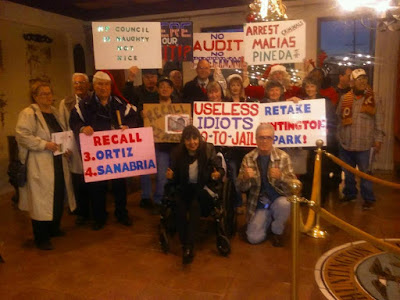