I did not find out until the Sunday before the event.

One of my friends pointed out the conspicious references to "constituents".:

Did you see this roybal meet and greet?  She says CONSTITUENTS on the invite...INTERESTING...

Notice that the flyer did not say "Constituents Only".

Would it be presumptuous for me to attend? I did not think so.

Our tax dollars pay for those offices, whether that person represents me directly in Congress or no.

I planned to attend, and I did.

Two friends offered to go with me, and they permitted me to attend as their guests, too.

Why would any Congressional representative go to such lengths?

Even more interesting. . . I am on the Congresswoman's email listserv, and never received notice of this event.

I just looked over her Twitter feed, and found nothing about this event on January 20th.

Why would she not advertise this event openly? What was she worried about? Was she hiding?

On January 20th, I arrived at the Congresswoman's Commerce office with my two friends Betty Retama and George Franco:


I met the chief of staff Victor Castillo. After I handed him my card, he looked at it very intently. He was shocked or scared for some reason.

Later, I would find out why.

Here, I posed with a sheriff's deputy and the Maywood City Clerk: 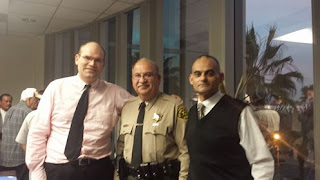 I mingled with a number of people whom I knew from Cudahy: 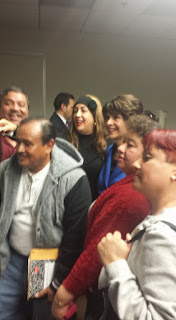 Castillo then confronted me, especially when he saw my "Fire Roybal-Allard" sign.

The First Amendment will tell you:

Congress shall make no law respecting an establishment of religion, or prohibiting the free exercise thereof; or abridging the freedom of speech, or of the press; or the right of the people peaceably to assemble, and to petition the government for a redress of grievances.

It's found in the Bill of Rights,Mr. Castillo, listed in our country's founding charter. More Congressmen seem bent on ignoring their oaths of office and disregarding the rights of individual citizens.

I have many grievances to petition to the Congresswoman. Every major federal authority tells me that she is responsible for investigating and demanding enforcement on federal matters in her district.

Which includes Huntington Park and Cudahy. Yes, I am repeating myself.

Castillo was intent on stopping me: "She has read your blog. This is a constituents' party. You need to be respectful."

Really? I have to be respectful, and yet the Congresswoman refuses to honor our laws and expect the same respect from the local governments for our borders and our current immigration system. The fearful hypocrisy is just too much.

Roybal-Allard refuses to do her job. She is not demanding the enforcement of federal law in those two cities. Two illegal aliens remain seated on two city commissions, and Cudahy declared itself a "sanctuary city". For whom? The city council cannot control its own chambers or meetings.

This whole charade is turning into a sickening political fraud. The chief of staff continued to rebuff me with "she has no control over" the  matter.

Congressman Dana Rohrabacher (R-Palos Verdes) confronted the Mexican consulate on Catalina Island for handing out ID cards to illegal aliens. I will not accept these excuses from the Congresswoman. She needs to do her job, respect her role as Congresswoman, and demand that the cities of Huntington Park and Cudahy honor federal law and legal residents.

The chief of staff tried to intimidate me into leaving the Congresswoman's office. I put aside the "Fire Roybal-Allard" sign and mixed with more of my friends in the room.

It did not work. I decided to ask Congresswoman Roybal-Allard, in front of everyone: "I am a guest with Betty and George. May I stay?"

Ha! Betty then came up with a great idea: "You can take a picture of me with the Congresswoman, can't you?"

Here's the picture of the Congresswoman with Betty Retama: 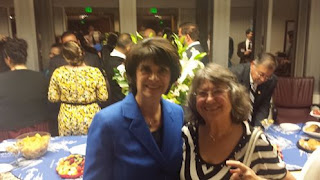 Right afterwards, I posed in another picture with We the People of Cudahy.

One of her staffers right away ran up to me: "Just because she took a picture with you does not mean that she agrees with your views."

What views would those be? Enforcing our existing immigration laws, perhaps?

Francisco Torres, an activist in Cudahy, spoke with the Congresswoman about the corruption in his city. He asked her not to endorse "Cudahy Chris" Garcia. She said that she did not endorse him.

Torres later reported to me in an open letter about his visit to Congresswoman Roybal-Allard:


Thank you Mr. Schaper for taking time and visiting Cudahy and listing the City Council meetings
Mr. Schaper you have in person experience the attitude of grandioso from Chris Garcia and the majority of Cudahy City Council. Chris Garcia did not give your respect and is the same he does to the community who trusted him and voted for him.

Do not vote for her! [Wow! Another Hispanic resident wants her out!]

Mrs. Royball-Allard needed to make time to listen to the people she represent.

Mrs. Royball-Allard will not solve all problems in California but she needs to listen to the people and she need to stop giving favorite treatment to Chris Garcia City Council from Cudahy City and his majority.
Sincerely,
1/21/2016
Francisco J. Torres , just a community member from the Southeast.

Now, Francisco mentioned that he felt intimidated at the Congresswoman's office.

Why? Not one, not two, but THREE sheriff's deputies showed up.

Congresswoman Roybal-Allard wants to push people away. She wants to avoid media spotlight on her inaction in Huntington Park and Cudahy. Now she seeks to intimidate people from voicing their frustrations.

I agree with Mr. Torres. I also agree with a growing number of Cudahy and Huntington Park residents fed up with her inaction:

I spoke with a well-connected constituent of hers a few days later.

He was surprised and dismayed at the dismal treatment I received. He could not believe that the office would try to prevent someone who was not a direct constituent. "How could they tell? Did they check other people's cards? How else would they have know who belonged and who did not?

"Our tax dollars pay for her office", he further commented.

I agree once again.

"She is not doing her job."

Contact Congresswoman Roybal-Allard's office, and tell her to start enforcing federal law in her district, or "You're Fired!"