We the People Rising came in full force to hold the Cudahy, CA City Council accountable for their corruption, malfeasance and rampant lawlessness.

In our group, we have Hispanics, African-Americans, young and old. A young Hispanic conservative, Isaac Rodriguez, also attended the city council to protest their illiberal sanctuary city folly as well as their rampant waste and fraud

The desperate smear of every amnesty panderer, of every undocumented politician, is to depict us as anti-immigrant bigots.

Not only is it not true, it is an old attack which more people are beginning to see through without hesitation.

Cudahy Chris Garcia, one of the Corrupt Cudahy Four, started taking pictures during the city council meeting on January 11th, a violation of the Brown Act. He is supposed to be governing the city in the best interests of all legal residents. When a city council upholds the rule of law, everyone benefits.

The Corrupt Cudahy Four are not interested in what is best for everyone -- just themselves.

Here is the desperate smear from Cuday Chris Garcia:

A racist anti immigrant group that is not from Cudahy tried hijacking our meeting tonight. Looked at them straight in the eye and told them "I condsider no human being illegal!"

Here are the photos he took:

In this photo are a number of Hispanic residents simply fed up with corruption. One of We the People Rising protesters is Raul Rodriguez, of Mexican dissent. Does Chris really think that Raul is biased or prejudiced toward Hispanicsc?!

Here are other photos: 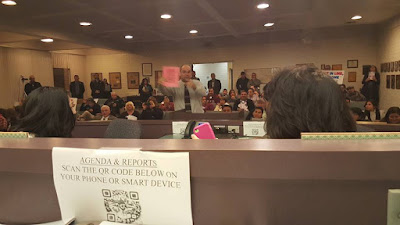 In this photo, Garcia was focusing on me. At this time, I was holding a pink slip, since this man needs to be fired, along with the other three fools.

Everyone in the audience supported my comments. The four of them are a bunch of little children with no experience or respect for their elders. They have no idea what they are doing, and do not realize that the city wants them GONE!

So, the protesters are a bunch of anti-immigrant racists? Please explain this picture, Mr. Garcia:

This photo should phase out any doubt about the intentions of We the People Rising:

Would Garcia like to call Sandra Orozco a racist to her face?! I dare him to . .
Garcia and Co. want to suggest that the protests centered on racism, Residents in the city shared otherwise: "He pretends to care about the illegals, but then admits that he does not care about them, because they cannot vote."

Second of all, we are not anti-immigrant or even racist. Check out the photos below if anyone has any questions. The residents in the city were thrilled that We the People Rising rose to the occasion and protested. We support legal immigration. One of our members, Betty Retama,

Third of all - we did take over the meeting, in that audience members shouted down the outrageous arrogance and corruption of the Cudahy City Council.

For the record, here are pictures of We the People Rising with HISPANIC residents and activists from the city:

Check out this photo of all of us with welcoming Cudahy residents:

The only anti-immigrant racists are the ones sitting on the city council who use and abuse the city, the children, and the hard-working taxpayers. Shame on them! 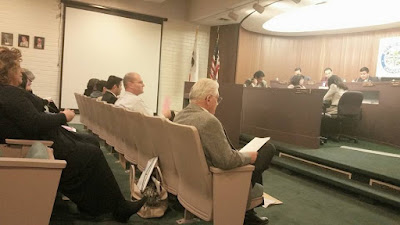 Why would city residents and supevisors take pictures of us and support our cause if we were just a bunch of anti-immigrant racists? Really?!

Check out the craven cowardice of the Cudahy Crooks:

Here are some other incriminating photos:


The Cudahy Crooks are taking advantage of law-abiding citizens and legal residents. They are the haters, and they ran away from us this evening. If they really cared about immigrants, they would uphold the rule of law, and stop engaging in rampant coruption.

Posted by Arthur Christopher Schaper at 2:28 AM