On Immigration: I Am a Dissident For the Right

I have the profoundest respect for Jeff Jacoby. He is a beacon of right in a very liberal Massachusetts. Republicans are gaining ground in the Bay State, in some part due to Jacoby’s writings. He hipped me to a strong local contender named Ryan Fattman of Sutton, and now the middle of the state is going tea party read (with a center-left Republican Governor). When I read his dissident statement on immigration, I found a great deal of his argument still missing: “One of those ideals has always been the encouragement of immigration as an engine of American progress and prosperity.”
Yes, when done legally. Yes again, when there is no lavish welfare state inducing new arrivals to live off of other people’s taxpayer dollars. Yes a third time, when immigrants relinquish their former nationality and embrace their new American status.

These issues were not open for debate one hundred years ago. Men and women all over the world came to this country not just to take part, but become a part of the American Dream. Ramesh Ponnru of National Review indicated that his parents came in the early 60's. Sign on the dotted line, get a passport, and you are on your own. Similar standards in the 1800's required that immigrants would not become a burden on society, including pregnant single mothers. Such strictures would be politically incorrect today.

Immigration enforcement was definitely not a divisive issue for Republicans even as recently (?) as 1980. Primary opponents Ronald Reagan and George Herbert Walker Bush were trying to portray themselves as more compassionate on the issue. That was then. This is now. What has happened since one hundred, even fifty years ago? Free market economic Milton Friedman articulated the problem best: “You can have free immigration to work, but not to welfare.”

From FDR to President Obama, the federal government has expanded the welfare state and its entitlement mentality to catastrophic proportions. Obama governs like a reckless gringo caudillo, with no regard for our nation’s laws, deciding which immigration statutes to enforce. Worst of all, migrants today do not assimilate. I spoke with high ranking officials in the California Republican Party, and the bristled at that word “assimilation”. If migrants seeking asylum or a new life do not like that word, then why come in the first place?

Coupled with aggravated entitlements, the federal government has refused its one simple nation responsibility: secure the border. Pro-amnesty proponents forget that a conservative Republican—Ronald Reagan—signed off on amnesty, with a law from Congress (take notes on your phone and pen, Obama!). The condition? A secure border.

We still don’t have one, and with the rising terrorist threats as well as rampant criminality along the border and in major cities, a guarded border is not just a political talking point, but an unequivocal necessity. Alexander Solzhenitsyn said it best: “Nations are the spice of life.” Yet nations cannot exist without borders, without telling demarcations. As Democratic Congresswoman Barbara Jordan declared: “We want to make sure that those who deserve to get in, get in.” Yes, a Democrat said that. I also stand with Louisiana Governor Bobby Jindal: “Immigration without assimilation is invasion.” I would also add, where there is no law, the people perish (that statement comes from Chanell Temple of We the People Rising).

Jacoby speaks of well of immigration, but he proceeds from a faulty foundation, ignoring the present political and legal realities. Too much government in our private lives hands out other people’s money, not enough government secures our borders, and a rising mass of people refuse to adapt to and adopt to the American way.

Jacoby should come to the Golden state, and see how illegal, unfettered immigration is tarnishing this once glowing paradise. In California, the margins of legality are blurring for the worse because of immigration. Not only have I written—nay, exposed—the illegal actions of the rogue Huntington Park, CA City council for appointing two illegal aliens to city councils, but We the People Rising have started targeting other cities and elected officials who welcome refugees who cannot be screened. 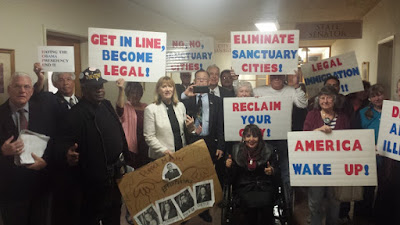 In Cudahy, CA once a peaceful working class community, the  majority of the city council declared their one square mile municipality a “sanctuary city.” Sanctuary city policies have done anything but provide sanctuary. Ask the parents of Kathryn Steinle.

Two weeks ago, I attended Cudahy’s raucous city council meetings. The rampant lawlessness has invaded even the council chambers, where the majority does not honor contracts, has moved close down city hall for three days out of the week, then cancels city council meetings and suppress public participation. Locals have blasted their corruption relentless, and when We the People Rising arrived, the city council was overwhelmed, repeatedly called out on their corruption and malfeasance. Watch this video to see the corrupt Cudahy Chris Garcia flee, followed by the sheepish mayor Cristian Markovich.

The Southeast Los Angeles corridor is turning into a coven of crime and corruption, where illegals live in the shadows, and elected officials engage in shady activities, without the legal populace fighting to stop it. These corrupt officials buy support by refusing to enforce or ally with federal officials, and then they rob the store.

How much longer will this last? Not any more for We the People.

I take further exception to Jacoby’s comment “Just a few election cycles ago, immigrant-bashing and seal-the-border nativism was limited to a relatively narrow sliver of the political right.” The vast majority of Americans support LEGAL immigration, Mr. Jacoby. Demanding the rule of law, a secure border, and proper assimilation is not nativism.

Americans’ demand for the rule of law is not racism or hate, despite the desperate pleading of pro-illegal alien activists like the lady in this video who tried to shout me down in Huntington Park, CA. Illegal immigration is breeding lawlessness throughout. Contrary to Jacoby’s assertion, I am not surprised that the Vocal (right!) Majority demands an abrupt stop to illegal immigration.
Posted by Arthur Christopher Schaper at 8:03 PM