The Los Angeles Wave Newspapers have covered the ongoing activism of We the People Rising in Huntington Park.

The newspaper's main reporter for the city council meetings, Arnold Adler, has been a key contact for me. In the past, I would inform him when our group was working on something in the city, or preparing for the next city council  meeting.

Without my informing him, he would have never known that that January 5th, 2016 city council meeting was canceled. 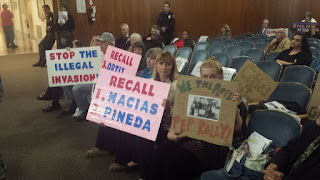 His latest article on our work in Huntington Park, however, left too much to be desired.

The article copy was riddle with factual and spelling errors, once with the same name spelled two different ways.

The headline was misleading:


It seems strange to abbreviate Huntington Park. What is going on?

Then the rest of the article follows:


HUNTINGTON PARK — Relegated to the end of the meeting, members of a regional group that has repeatedly criticized the City Council still made their voices heard early in the Jan. 19 session.

Told that only comments related to items on the agenda could be heard at the start of the meeting, members of We The People Rising discussed two items to level their rebukes.

We sure did. In the past, Huntington Park City Council rules would only permit comment at one point in the meeting, and on both agenda and non-agenda items. Now that the city council tries to discourage us from speaking, the council has given us more opportunities to criticize them. They did not think through our resolve to hold them accountable.

The items were participation in an open street CicLAvia program May 15 and a trip to a shopping center convention May 22-25. Council later approved both items.

Arthur Schaper of Torrance spoke against closing a city street for the bicycle and pedestrian event while Robin Hvidson of Claremont berated the council for considering the Las Vegas trip at a cost of $12,000.

She told a reporter she also protested the open street event and its cost, but was not allowed to speak. Mayor Karina Macias said she did not have a comment request card from Hvidson for that subject.

That statement is a lie. Robin did place a card in the box to comment on this matter. A public records request is pending on this discrepancy.

City staff noted that CivLAvia is a joint program with other cities and is funded by a grant from the Los Angeles County Metropolitan Transportation Authority.

City officials have noted that past trips to the Las Vegas convention have resulted in businesses, such as Starbucks, moving into the city.

While the council was in closed session, Schaper conducted loud interviews, taped by Havidson [sic] , with a Huntington Park police officer repeating charges that the city broke the law by  appointing two non-citizens to advisory commission.

Schaper was challenged by a young woman who said the group should stop harassing the council. The woman, who identified herself only as “Karla” and said she was a Huntington Park resident and citizen, led a group of audience members in chanting “stop the hate.”

Schaper responded by leading a chant “get in line,” meaning immigrants should apply for citizenship.

If anyone watches the video, they will hear that I never once chanted "get in line." The sign I carried did read that phrase, but I never said that. He also failed to report the racist remarks from "Karla", and how she had been raising her voice to drown out everyone else. She talked about brown people and white people. So much racist rhetoric, and Adler ignored all of it.

Here is another video, in which I confronted one of the college graduates who called me a "white supremacist." Does this video count as one of the "loud interviews" which Alder was referring to? No one complained that I was too loud when I was speaking with this person. Furthermore, Adler wrote nothing about that young man's racist remarks.

Members of the group continued to shout comments from their seats during the meeting, resulting in pleas for order from Mayor Karina Macias, two five-minute recesses and warnings from a police officer and City Attorney Arnold Alvarez-Glasman that disrupting the meeting could result in temporary removal from the council chambers.

Adler forgot to report that Macias had left out four speaker cards and had to permit those four individuals to address the council on agenda items. He then neglects to mention why we were shouting. Robin wanted to speak on agenda item #7, and was not permitted to do so. Her rights were violated, and we protested that violation.

One member of the group, Raul Rodriguez, was removed.

The group has protested with comments and signs calling for removal of the non-citizens, Francisco  Medina from the Health and Education Commission and Julian Zatarain from the Parks and Recreation Commission; also for the recall of all council members except Valentin Amezquita, who voted against appointment of the two.

"Non-citizens"? Really?! The political correctness knows no bounds in the press. UGH!

Council members were not able to start the regular business meeting until about 8:30 p.m., some two and one-half hours into the meeting, which continued well past midnight.

He is correct that the meeting continued well into the  next morning. His reporting suggests that the delays in the meeting are the fault of We the People Rising.

The truth is that if the Huntington Park City Council had never violated federal and state law in appointing the two illegal aliens to city commissions, we would not be there to protest in the first place. None of us would have raised our voices against the city council of the mayor had not deliberately misplaced or left out our speaker cards.

More residents in the city would not complain if they members honored their oaths of office and served the city rather than themselves.

This article was the worst reporting I have read from the LA Wave in a long time. Very disappointed.
Posted by Arthur Christopher Schaper at 7:22 PM