Monica Showalter of the Investors Business Daily published an article about We the People Rising and our ongoing efforts in Huntington Park.

The writer focused on my interrogation of illegal alien "commissioner" Julian Zatarain. Showalter's insights were particularly revealing and encouraging for our cause.

So What's Up With The Huntington Park Illegal Immigrant Commissioner?

Back in August, the city of Huntington Park appointed two illegal immigrants, Julian Zatarain and Francisco Medina, to city commissions, despite protests from citizens. The media reported that but have since been silent to their terms of office and how that's gone.

That is, except for one guy, blogger and Townhall columnist Arthur Schaper, who made a YouTube clip of his December encounter with one of the illegal immigrants now seated in the leadership of that city's government. IBD wrote about the problematic appointments here, noting that it's very strange for two men with no apparent political experience to be gaining spots on city commissions. It's even stranger that they could not make themselves legal through the Deferred Action for Childhood Arrivals (DACA), given their young ages (21 and 24) as well as their supposedly long residencies in the U.S. Approval rates have been in the high-90% range for most.

I need to set the record straight on this post. If not for the work and wonders of We the People Rising director Robin Hvidston, Raul Rodriguez, and their camera recorders, much of the pertinent information posted on YouTube would never see the light of day, or the eyes of reporters and viewers around the world. The Public Integrity Division of the LA Country District Attorney's office would never have informed the city council of their egregious Brown Act and public access laws.

More importantly, no one would have known about my interrogation of the illegal alien Jukian Zatarain.

Which is why the persistent blogger Schaper took it upon himself, outside any press attention, to record and film just that question to Zatarain at a city meeting. Again and again, he asked Zatarain why he didn't get legal residency and follow the law as other immigrants do.
Zatarain, a native of Sinaloa, Mexico, didn't have much of an answer for him other than the process was complicated and the laws were changing. He didn't seem a bit worried about not following the law or running a city where he didn't hold its citizenship.

Zatarain is arrogance writ large. He does not obey law, and thinks that since he is immune to enforcement, he can do whatever he wants. Not any more.

Though he didn't get far, Schaper did reveal some interesting information.

I would submit that We the People Rising have gone great distances where the mainstream media and local activists besides ourselves have done little to nothing. There are some registered Republicans in the region, and one of them has given me a lot of talk, but very little walk.

1. Zatarain is slick and political, with clear ambitions beyond Huntington Park.

Absolutely he does. His Facebook page reveals his egotism and political pride: 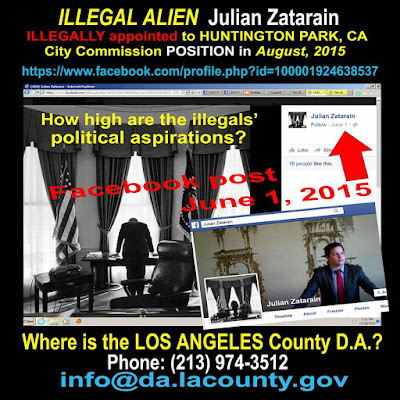 2. Zatarain, for what he claims is a volunteer job, is getting quite a sum of money from somewhere, based on his expensive mode of dress.

Very good question. Where does he get his money? Who is paying for him to live in Huntington Parkm or anywhere in Los Angeles County for that matter? He dresses pretty well for a hard-up illegal trying to get right with the law. Who paid for his college tuition? He must have some liberal malefactor paying his way.

3. Zatarain has the power to shut out citizens asking uncomfortable questions, with no accountability.

Not sure about this one. We chased him away from the city council chambers. The city staff allowed him to hide in the conference room and the overflow meeting room, where We the People Rising had met a few months prior during their closed session.

4. Zatarain's engagement in political campaigns is illegal for a citizen of another country, something for which he has no explanation.

He is in the country illegally. Period. He has no business doing any business in the state of California.

No word on how he missed DACA or what the background check on his fitness for office in Sacramento found. Perhaps that will be Schaper's next project.

That's actually a great idea. I will look into that.

It's worth watching the YouTube video, if for nothing else than to see the arrogance of political power of those whose loyalty is to political machines, not the U.S. Constitution or rule of law.

I am committed to doing my part, and want more people to rise up and do the same.
Posted by Arthur Christopher Schaper at 3:03 PM