An American Tragedy in Huntington Park: Nick the Greek

Long-time citizen-patriot and Huntington Park resident Nick Ioannidis signed off on a loan which he could never pay.  He had credit card and other debts, and now, after four months of not paying his bills or repaying the oversized loan beyond his capacity to ever repay, his debtors are preparing to foreclose on his tailor shop, which has also served as an American shrine to love of country.

This is the saddest story yet which I have learned about in Huntington Park.

Yet the story gets more sordid the more that I learn about it.

Nick the Greek is losing his vision and he does not speak English that well. He certainly does not read or write English very well, either. So, how is it possible that anyone would have allowed Nick to sign off on a loan with illegal interest rates, with a monthly installment plan which he could never pay?

Nick's accountant fudged the numbers to make it look, his daughter Patty told me. Then a real estate agent stepped into to broker this wicked deal. No interpreter was provided for Nick, and there is no way that this naturalized citizen with a weak grasp of English could begin to understand the complex -- and illegal -- jargon of the loan he signed.

I could not agree more.

Not only that, but let's not forget that the city of Huntington Park had agreed to compensate Nick the Greek a considerable sum of money for their planning commission's poor, failed directions to bring his building up to code. Ioannidis  had threatened to sue the city for their terrible directions and misleading demands, but Nick relinquished the lawsuit when the city agreed to pay him back for his costs.

The city would later renege on the deal, and to this day no one is paying him back. Instead, the four rogues on the city council appointed two illegal aliens to city commission, along with their friends, relatives, and campaign staff. The city council approves unethical business deals without competitive bids, and wastes money on Big Green proposals which will further bankrupt the city.

So, Nick the Greek was conned out of more than $100,000 for the refurbishments he made on his building, which still failed to bring his tailor shop up to code.

Then his accountant takes advantage of him, and throughout a real estate agent has Nick sign off on a massive loan with high - illegal - interests, then imposes a high repayment schedule. Even though he makes only $17,000 a year, the terms of the bad loan required him to pay back $3,000, then $3,200 a month for a $350,000 loan.

With mounting debts, a looming foreclosure, or inescapable bankruptcy facing him. Nick's family undertook to sell the property at a high margin, pay off the outrageous debt, and provide funds for Nick and his wife to live on afterwards.

The sad part of this outcome, however, is that the tailor shop Nick the Greek in America is a living, vibrant testimony to Ionnidis' love for America. We the People Rising joined with Nick and locally elected officials to celebrate Immigrants Day on his property. None of the current Huntington Park City Council members bothered to attend.

They have plenty of reasons to attend: Huntington Park, a city for immigrants. The fanfare of glowing Americana, the deep history and legacy of pride and patriotism. Of course, the same four shameful city council members have reasons not to attend: aiding and abetting illegal immigration in Huntington Park. Ignoring code enforcement; practicing nepotism and influence peddling, taking city money for personal purposes; transforming a once vibrant, thriving city into a third-world hell-hole, etc.

Even though the city council has not visited Nick's place, state assemblyman Miguel Santiago honored him with an award: 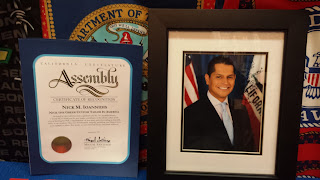 Here is a closer look at the Certificate of Recognition: 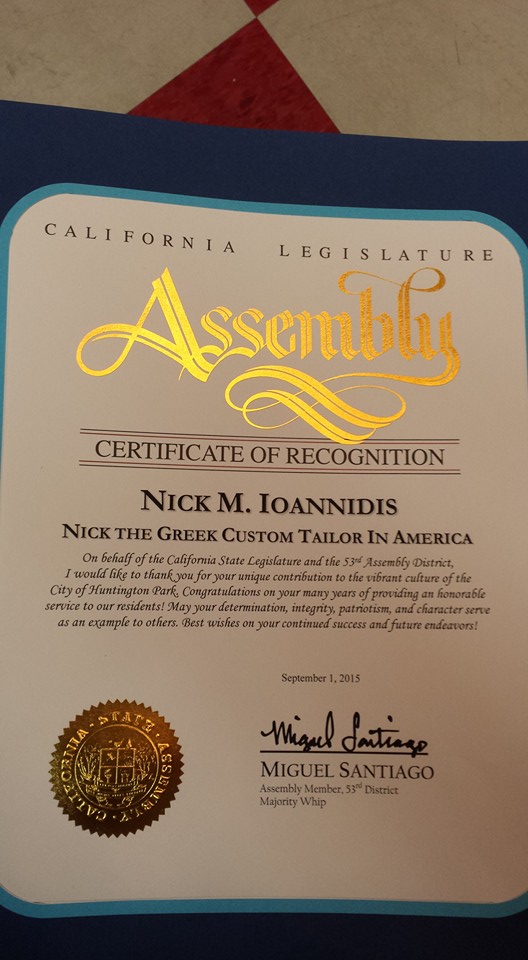 Here is a picture of Nick's family in earlier years: 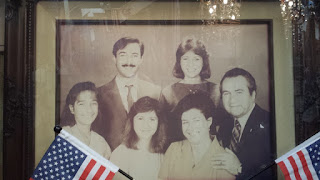 Within the main lobby of Nick's tailor shop, hundreds of head shots depicting elected officials, past and present, decorate all four walls. 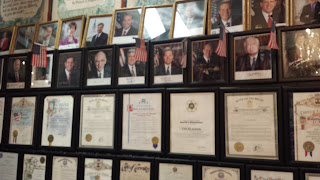 On the floor, a tile mosaic celebrates the city of Huntington Park with the city seal. 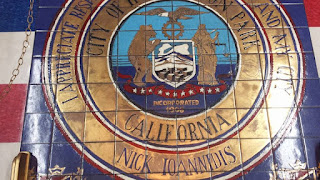 This tailor shop should be a national, historical monument. Council member Valentin Amezquita -- the only honest official on the Huntington Park City Council -- wanted to expedite that process. However, with the huge debt looming over the property, and little time remaining, the only recourse so far for the Ioannidis family has been to sell the property to the highest bidder and ensure a comfortable retirement for Nick and his wife.

There must be a better way. The crooked city council, account, real estate agent, and all other inactive or deceptive parties should be brought to justice. Nick the Greek in America should remain the moving and inspiring monument to patriotism and civic pride which Nick intended it to be.

This American Tragedy can -- must -- have a happier ending.