Discrimination against Nick the Greek in Huntington Park

The American Tragedy of Nick the Greek in Huntington Park has only gotten worse, the more that I learn the darkened history of what happens in this once glowing, busy, vibrant city.

In one article, Nick explained his work ethic and customer rapport: "Everybody's blood is red", and therefore he gives service to all. This article, published in a 2002 edition of the ACC Community Affairs.

Yet in the last few years, the city has not only reneged on paying him back for the faulty repairs made to his shop, but the city Chamber of Commerce excluded him from city functions and parades.

"An iconic political and community leader from Huntington Park is taking on members of its local chamber of commerce in a lawsuit that claims his civil rights were violated because he is not of Hispanic origin and that he was unfairly banned from participating in a holiday parade." 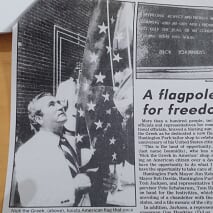 Another article exposed one of Huntington Park's former city council members, Rosa Perez, who claimed that trouble started for the city when "The Americans" were in power.

Here are the exact quotes from the newspaper article:

In 2012 a public comment form Mexico-born Huntington Park City Councilwoman Rosa Perez sparked a media frenzy after she blamed "the Americans" who served as past elected officials for problems with residential and business water meter.

Discrimination was already rampant in the city council three years ago, and the current city council, initially elected to throw out the corruption and malfeasance, has only made it worse.

Peter, who was elected in 2011, stunned the mostly Spanish speaking audience in attendance at Huntington Park City Hall when the comment was made. At the time, Perez said, "I wanted to come into (elected) office, and to see what the problems are in the city and try to bring solutions to them. A big problem is that people thank that when the Americans were in office everything was all great and when the Latinos came in, then all the problems came in."

Excuse me?! The last time I read, heard, and understood, every person who lives legally in the United States is an American, and there is no distinction on legal status, regardless of whether one is born or naturalized. 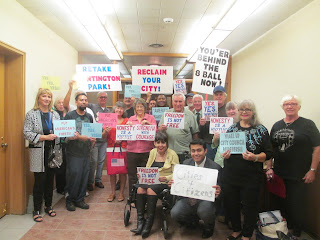 Perez was ranting against "the Americans" in Spanish at the time, too. Is it not against the law for elected officials in the state of California to conduct business in any other language besides English?

The good news is that during that city council meeting, members of the audience booed those offensive remarks.

His lawsuit claims that on or about three days prior to the November 2012 Annual Christmas Parade, he was informed by CEO Leticia Martinez, that he was not allowed to participate and was never given  an explanation to the decisions. "I felt publicly humiliated by Martinez' actions" and is claiming that he lost an estimated $!500 for food, decorations, invitations and other costs associated around the event.

Where Huntington Park leaders targeting Nick the Greek because he was not Mexican, or of Hispanic dissent. Another long-time legal resident in the city, Francisco Rivera, acknowledged on nationally TV and repeated to me that many times, he could not get a job unless he acted as if he only spoke Spanish.

Discrimination against Americans - and Americanism - is all too rampant in Huntington Park!