Sanctuary cities are getting the attention now -- which they should have gotten five years ago, ten years ago. Illegal immigration has boiled to the forefront for the past decade, ever since the Bush Administration tried and drastically failed to pass key legislation that would "reform immigration."

Then as now, the American people want enforcement. Like Senator Ted Cruz announced on the floor of the United States Senate during final deliberations on the 2013 Gang of Eight bill, the American People should not have to barter for security by allowing for amnesty or pathways to citizenship.

All of this is wrong.

The American people have every right to demand that the federal government do its simple job of providing for the common defense!

Here are a few statements about the sanctuary city fight which House Republicans are waging against the amnestarians in the White House and the Executive cabinet:

If I remember correctly, Rep. Culberson (of Texas) threatened to use the power of the purse and cut off money if DOJ didn't make jurisdictions follow the law before sending them grant money. There was some correspondence prior to the hearing which established this. Also, they requested a quarterly report from Lynch to make sure they were following through. The Bill O'Reillylink has a short summary.

That's an easy way to stop the lawlessness. Cut the funding! 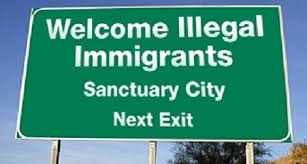 Congress loves to spend  money. They are not very good at stopping the spending sprees.

This is the video from the Culberson hearing to take down sanctuary cities and stop illegal immigration.

And this is the statement from Culberson at that committee hearing:

“Sanctuary city policies across the country have contributed to the deaths of thousands of Americans and caused untold suffering. This is unacceptable and intolerable, and it has allowed thousands of criminal aliens to roam freely on American streets.

We need to remember these men and women, these children, these families which have been forever separated.

Who will bring them back together? That son, that daughter is now dead, and there is nothing that man or the state can do to bring those victims to life and back to their families.

“On February 1, I wrote to Attorney General Loretta Lynch explaining that as the new chairman of the Commerce, Justice and Science Appropriations Subcommittee, I believe local and state jurisdictions should not apply for federal money unless they comply with federal law. I asked Attorney General Lynch to change the federal grant application process to require state and local authorities to verify that they are in compliance with federal law, and if they are not, to deny their application.

How about just denying them the money, without Attorney General Lynch's support?

“In response to my concerns, today the Attorney General announced that BOP will release criminal illegal aliens to ICE instead of sanctuary cities.  This is welcome news. If this had been BOP's policy last summer, Kate Steinle would be alive today. I am grateful Attorney General Lynch made this important change, and I look forward to receiving regular updates from the Department of Justice on the progress they are making implementing this new policy.

This should have happened ten years ago. This should have been happening the moment that Barack Obama took the oath of office to become the next President of the United States.

“Second, the Attorney General announced that DOJ can take action against jurisdictions receiving grants when they are not in compliance with Federal law.  If jurisdictions choose to implement sanctuary policies that prevent them from cooperating with federal immigration authorities, they are putting their federal grant money at risk unless they change their policy to comply with federal law.  The Attorney General promised to provide my subcommittee with quarterly reports on their progress on these two new policies, and I intend to zealously oversee their work. I will use every legislative tool at my disposal to help the Attorney General implement these new policies.

Cities are violating federal law when they do not deport illegal aliens.

They are violating federal when they shield illegals from ICE.

These cities are violating federal law when they promote illegal aliens to city commissions!  Did you hear that Huntington Park? We are not going to tolerate this lawlessness. Culberson is demanding an end to these illegal enabling actions.

And so do We the People Rising!

“The new policies the Department of Justice announced today will keep our streets safer by ensuring that criminal aliens do not roam freely in our communities, and prevent federal tax dollars from being sent to jurisdictions that refuse to comply with federal immigration laws.

“I am very grateful to Attorney General Lynch for her leadership in making these vital changes which will save lives and make our streets much safer.”

Our elected officials need to start doing the right thing for all residents, for all CITIZENS.

These expectations are not a small matter. All lives matter, and they will continue to matter when our government takes the rule of law seriously.

My friend also reminded me that while the federal government is taking tighter control of our borders, California wants to open up the borders even further to illegal aliens:

Also of note, California is in the process of passing a bill which would make police departments follow the locality's policies i.e. sanctuary policies. I believe this would prevent what the L.A. County Sheriff Department did (taking a tough stance and enacting as much as they could to cooperate with ICE) in response to the L.A. County Supervisors eliminating 287g. I haven't read the bill yet. 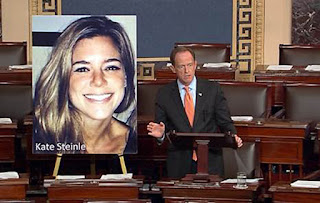 So, what will our local law enforcement do when pressed between the state's laws and the dictates of Washington D.C.? California's lax immigration policies are hurting the entire country.

We need to secure our borders. That means a wall, E-verify, more border patrol agencies, a zero-tolerance policy for illegals crossing the border.

From AB 2792: "This bill, the Transparent Review of Unjust Transfers and Holds (TRUTH) Act, would authorize a local law enforcement agency to participate in a United States Immigration and Customs Enforcement (ICE) immigration enforcement program only if it enters into a memorandum of understanding (MOU) with the governing body of the political subdivision in which the law enforcement agency is located located, ... "

The United States is in a much better position than California, at least from a political standpoint.

Culberson was launching extensive investigations plus demands for enforcement. This year, he was facing a strong primary challenge from Maria Espinoza, the founder of the Remembrance Project. That political threat might have pushed him enough to do his job and demand that the executive branch start enforcing the laws of the land.

It's time to stop sanctuary cities. It's time for cities to b restored as sanctuaries for citizens. Law enforcement officers should not be forced to compromise the safety and integrity of their individual communities. Police officers should be able to lock up and have criminals, illegal aliens, carted off to ICE then thrown out of the country.  If the federal government has to take away the money and power of cities--and states!--for violating federal law and compromising our borders, then so be it.