He wrote a few months back how Donald Trump is going to be the next President of the United States.

I listed how his compromise regressive, leftist rant is music to the ears of every American who wants Donald Trump in the White House, even if only because it means Hillary Clinton goes away.


He gives one of the most piercing send-ups of the Democratic nominee. One has to wonder why more Republicans down-ticket don't use Michael Moore's own words to attack Democratic contenders in key races.

The Hillary Problem. Can we speak honestly, just among ourselves? And before we do, let me state, I actually like Hillary – a lot – and I think she has been given a bad rap she doesn’t deserve.

Let that statement sink in. He likes Hillary Clinton! Probably more than her husband!

But her vote for the Iraq War made me promise her that I would never vote for her again. To date, I haven’t broken that promise. For the sake of preventing a proto-fascist from becoming our commander-in-chief, I’m breaking that promise.

He wants to stop a proto-fascist from becoming the next President of the United States? He should keep his promise and never vote for Hillary Clinton.

Preferably, he can choose not to vote at all!

I sadly believe Clinton will find a way to get us in some kind of military action. She’s a hawk, to the right of Obama. But Trump’s psycho finger will be on The Button, and that is that. Done and done.

Of course, grievance mongers like Moore thrive on more government into our daily lives (but not his own, of course).

Moore did not keep his promises to the people of Flint Michigan to help that impoverished town. Where was he to fight for the Flint residents, whose water was so bad, while the government employees were swigging the freshest and finest?

Where was Michael Moore when Detroit was tearing itself apart from its cultural degradation?

Let’s face it: Our biggest problem here isn’t Trump – it’s Hillary. She is hugely unpopular — nearly 70% of all voters think she is untrustworthy and dishonest.

It's not just a matter of what people think. It's the truth.

She can't keep her lies in line. She goes back and forth on every issue, on major moments. She even lies when there's no reason for her to lie!

Hillary Clinton has worse than a loose relationship to the truth. She cannot help her penchant for lying!

She represents the old way of politics, not really believing in anything other than what can get you elected. That’s why she fights against gays getting married one moment, and the next she’s officiating a gay marriage.

The "old style" of politics? Politicians can either believe or not believe something, but her inner motivations are hardly the problem. She doesn't have any morals. She merely repeats what everyone else wants to hear.

She says whatever will play back for her more votes.

Michael Moore is getting behind a pathological political fraud. He will not look past the fact that she has been a big liar all her life. What does his misplaced support for this woman say about himself?

Young women are among her biggest detractors, which has to hurt considering it’s the sacrifices and the battles that Hillary and other women of her generation endured so that this younger generation would never have to be told by the Barbara Bushes of the world that they should just shut up and go bake some cookies. 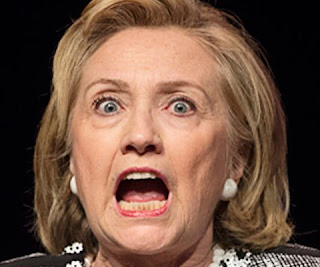 What battles did Hillary Clinton win for women?

All those court cases and political maneuverings that promoted her career and protected her perverted, predatory husband?

All the slimy attacks against women and children who did not support her?

How about the petty slights which suggested that Barack Obama was not born a United States citizen?

How about the shame-fest she has engaged in against the mother of one of the Benghazi victims?

But the kids don’t like her, and not a day goes by that a millennial doesn’t tell me they aren’t voting for her. No Democrat, and certainly no independent, is waking up on November 8th excited to run out and vote for Hillary the way they did the day Obama became president or when Bernie was on the primary ballot.

Hillary Clinton has credibility as well as enthusiasm gaps.

The enthusiasm just isn’t there. And because this election is going to come down to just one thing — who drags the most people out of the house and gets them to the polls — Trump right now is in the catbird seat.

He is in the driver's seat, Mike!

And hopefully you'll keep your promise, and drive away to Canada when Trump becomes the next President of the United States!