I’m not talking about San Jose.

I’m talking about Torrance, my home, the Balanced City.

Our state assembly seat is California’s balance of power, where Democrats are desperate to re-seize the supermajority in Sacramento.

But we’re not going to take the left-wing Democrats’ abuse us anymore.

Conservatives in blue states have to step up, and we California conservatives follow the Trump Model. We can’t take anything for granted, and we do no play nice!

If there is anyone who embodies this new “Get Tough” approach, its’ Sheriff Joe Arpaio.
Maricopa County Sheriff Joe does not play--period.

He loves this country, and his prisoners under guard better start loving it, too. No matter what the crime, a prisoner in the United States is a prince compared to convicts around the world. They don’t get to grieve. They need to rehabilitate themselves and get back to obeying the rule of law.
In Maricopa County, prison is not Club Med.

Prisoners don’t get special rights. They declare the Pledge of Allegiance. They sing the Star Spangled Banner. They don’t get easy treatment for roughly abusing and disobeying the law. They act up? They get pink underwater. They won’t respect authority? They can get by on bread and water.

The professional class of Social (IN)Justice Warriors who defend these criminals—trial lawyers looking for an easy payout—have lobbied, lawyered, and lobbed every lawsuit they can to take down the Sheriff. But the people of Arizona love him, and they expect him to bounce back stronger than ever this election season.

Sheriff Joe makes border security paramount. He doesn’t tolerate the drug problems eating up this country. Despite what many of said (or rather denounced) about Arpaio, he has no qualms about working with Mexico to secure their borders and destroy the cartels.

There’re more about Arpaio which have promoted him as a force to be reckoned with this election season.

Unlike many Republicans (including myself), Arpaio endorsed Donald Trump early. Unlike the other Republican Presidential contenders, Trump still shows his love and appreciation to the family. He is down-to-earth, ready to keep strong connections, and unafraid to state the obvious. 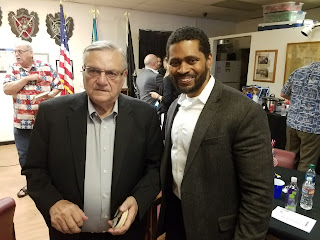 He wants a wall, and he wants Mexico to pay for it to. If the Mexicans won’t pony up, then the United States will stop sending federal aid to the Latin American nation. How about using American tax dollars to help Americans for a change?

Now, all of this is inside information of a sort, and I am no Arizona resident (love the Republican trifecta, but can’t take the heat).

Because I met him at the Veterans of Foreign Wars Hall right on the border of my hometown and the 110 freeway!

George Park, one of the founders of a new group called the California Impact Republicans, invited me to meet the legendary sheriff.

How could I refuse?

The whole affair was a secret meeting initially. A local realtor with a heart for this country (and the rule of law) wanted to sponsor the event in his office. Then the rabid, anti-Social Justice Warriors found out about it, and sent notices throughout Los Angeles County. They were prepared to raise the loudest ruckus they could.

The CA Impact Team decided to move the Arpaio Event to the tucked-away VFA Hall. 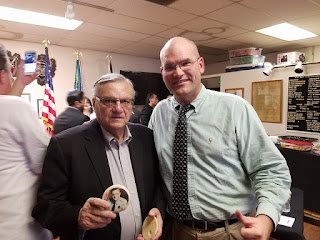 They laid out an incredible, edible banquet, including a cake from the world famous Torrance Bakery, which touted an impressive image of our featured guest, Sheriff Joe. An array of cookies graced the table, with Sheriff Joe’s gruff visage one the icing!

All of us were hoping for a quiet event, but somehow La Raza activists found the new location!
Quite a scene transpired: SJWs shouting and yelling—I never heard the word “racist” repeated (and depleted of meaning) so many times in one hour. Red shirts with La Raza and other socialist markings blanketed the heedless, angry group.

Particularly, this assembled group did not a crowd create, nor amass. Twenty people showed up, including the regressive President of the Torrance Democratic Club Jimmy Gow (who shut out constituents from meeting with our former Congressman Henry “RatFace” Waxman—but that’s another story for another day).

The protesters got violent, and took one Republican’s phone away. Another one pushed a gentleman, and hit me, too. Another Razisto blared his stereo into my ears while I was recording the event.
Some of Impact Republican members had hoped to avoid the press, but the press of social justice insipid stupidity rendered all of that a moot point.

One young black lady kept calling me a “Dummy”, then shouted that black people are allowed to be segregationist. What? And I am the racist? For Sheriff Joe, all this protesting just encourages him to stand out as the strong and capable law and order leader much needed in this country.

Insider, he recount the background on his life, his role in the District Attorney’s office as well as several law enforcement positions. He’s now 84 years, old but he’s full of energy, just like our Presidential nominee.Then he learned about the SJWs screaming outside.

“Only twenty?” he asked. “I used to bring out as many as three hundred. Now, they don’t come out anymore!

“How about I go out there and give them a cookie?”

We all cheered. One of Sheriff Joe’s staffers accompanied him, and so did I!

What a sad uproar those angry, left-wing protesters devolved into.

A gentle old man who demands the best for all Americans wanted to give the rabid, Black Lives (Don’t) Matter crowd a cookie!

They cursed at Sheriff Joe, but don’t worry—we are exposing to world that is now wise to SJWs campy hateful cant isn’t working anymore!

The meeting was a real blast! California Impact Republicans are making an impact and I was there to meet Sheriff Joe!

And I got a cookie, too!
Posted by Arthur Christopher Schaper at 8:33 PM