He is already tanking by double-digits in his home state, the same state which he had governed, and very poorly.

John Kasich was a good governor for the first two years, and even though he has embraced some destructive, liberal ideas since then, the Republican Party of Ohio is a gold-star standard of what good governance looks like. Now, the Democratic Party cannot field a strong contender, even during a Presidential election year!

Here comes US Senator Elizabeth Warren to try to warm over and make Strickland a viable candidate--even though his chances are as healthy as Hillary Clinton's.

Our 2012 campaign was tough. Really tough. We ended up spending $42 million – a crazy amount of money – to win in Massachusetts. It was the most expensive Senate race of 2012.

Let's not forget that for the first time in 34 years, a Republican, state senator Scott Brown, was elected to represent Massachusetts in the upper chamber. Incredible, but true!

One reason; to stop Obamacare.

Elizabeth Warren ultimately swept Brown in 2012 because Republicans did not turn out to vote. It also didn't help that Browns spent more time attacking other Republicans rather than bashing Lizzie Lie-a-watha.

But that seems like a cakewalk compared to what Ted Strickland is facing right now in Ohio.

What Ted Strickland is facing is the Not-so-Silent Majority front-slapping President Obama and his demented, destructive need to fundamentally transform the United States. This country does not need a massive transformation. The White House does, as well as the Democratic Party, which needs to shed its Left-wing undercurrent of corruption and destruction.

And Warren represents this criminal enterprise in every way.

In Massachusetts, my opponent and I signed a pledge to keep super PAC attack ads off the air. But in Ohio, thanks to the Koch brothers, the NRA, and their allies, there’s been more dark money than any other Senate race in the nation.

There we go, blame the Koch Brothers again.

Haven't the Democrats realized that this line of attack against the Kansas-based libertarian oil magnates is no longer working? The Koch Brothers aren't even supporting Donald Trump! The down ticket of Republicans running for US Senate, the House, and state and local races are getting a lot more love and attention, anyway.

And it's working out for Republicans.

Ted Strickland has been a darn tough fighter – even as he is facing an obscene $59 million in attacks from Republican Rob Portman and his billionaire backers.

"Darn tough"? Really. Please, how corny and pathetic can you get?!

That’s why I’m in Ohio right now standing with Ted. We’re traveling across Ohio this weekend, and you wouldn’t believe the energy we’re seeing at Ted’s events. Voters desperately want change in the Senate, and they want to give our friend Sherrod Brown a strong partner to fight for Ohio families.

She can run all over the state as much she wants to. Her regressive brand of socialist politicking has been resoundingly rejected. Dennis Kucinich could not win a primary fight in 2012. Republicans dominate every level of government in the Buckeye State. 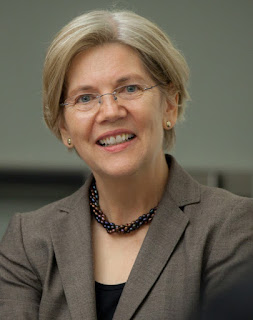 This guy is drowming in the Democratic Party's wake of corruption and disinterest. Lizzie might as well describe the water at this point.

Despite all the TV ads, the polls in Ohio are still close. And from everything I’m seeing here on the ground in Ohio, Ted can win with a strong grassroots finish. But he needs money to fight back against all these attacks. With less than eight weeks to go, let’s help Ted fight back.

Wow--another Democratic whopper. There is nothing close about the race in Ohio. Hillary Clinton is tanking, and Strickland is double-digits behind. Please, Lie-a-watha, go back to doctoring your doctoral curriculum vitae.

At this point in my election, the polls were all over the place – the most recent one had us down by four points. But we rolled up our sleeves and got to work – knocking on more doors and making more phone calls than any campaign in Massachusetts’ history. Knowing that we won fair and square with the strongest grassroots army that Massachusetts had ever seen made our eight-point victory even sweeter.

Fair and square in Massachusetts? Perhaps, but Ohio will not tolerate any voting violations or voter fraud. Bet on it, and because of these dynamics, there is no uestion that Rob Portman is going to carry the state.

Early voting here in the Buckeye State starts in just in just 25 days. And decisions about how many organizers to hire, how many offices to open – even how many stickers and yard signs to print – are being made right now. Your contribution will help one of my favorite Democratic Senate candidates finish his campaign strong, and give us the seats we need to take back the Democratic majority next year.

Please support Ted's Senate campaign today. We need him in the Senate.

Thanks for being a part of this,

When Election 2016 ends, political commentators and the consultant class will have to review the factors which enabled Rob Portman to outclass and outperform his Democratic challenger (who had strong name ID) and run away above the national polling matrices.

That will be a fascinating study for another time.

For now, Republicans should rest content that at least one targeted US Senate seat is staying in Republican hands.
Posted by Arthur Christopher Schaper at 11:59 AM