I declare to this council three very clear demands:

Rescind the appointments of the two illegal aliens Francisco Medina and Julian Zatarain.

I call on Karina Macias, Jhonny Pineda, Marilyn Sanabria, and Graciela Ortiz to step down. They have failed this community, they have ignored the needs and concerns of the legal residents , and they are openly endorsing lawlessness.

Here, we the people are sending the message, to all elected officials in Los Angeles County and around the country: do not dismiss or diminish the United States Constitution, the rule of law, or the legal residents, whether born or naturalized. Do not appoint illegal aliens to positions of public trust are service at the expense of legal residents. 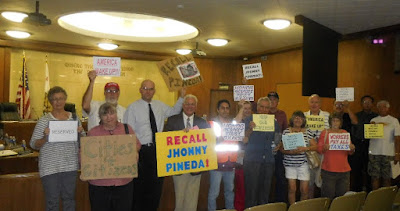 You are not going to put legal residents in the back of the bus in favor of illegal aliens. We the People have already stopped the buses in Murrieta. We are riding this bus, and we are going to decide who rides and who gets off. Do not crucify citizenship on a cross of big amnesty and call it a humanitarian effort, with the Chamber of Commerce on one side and La Raza on the other handing you the nails.
We the People are taking this fight everywhere, sounding off on our cause throughout the county and the country. I have confronted Congresswoman Roybal-Allard, whose only excuse for doing nothing is “ICE hasn’t shown up yet.” So, if I decided to steal something, and the police don’t catch me, does that mean I have not broken the law, too? Congressman Dana Rohrabacher personally confronted the Mexican consulate on Catalina Island when they were handing out ID’s to illegals. Congresswoman Roybal-Allard could be doing something, if she wanted to.

I have called out Supervisor Hilda Solis, who has relented to permit ICE agents back into LA County jails. When will she do her job and demand that you, city council, start respecting the rule of law and remove the two illegal aliens for city commissions.

More people are well aware of the crap and corruption eating up this city from the inside out, and rest assured: you are not getting away with anything.

Furthermore, I repeat my demand for a forensic audit of the city of Huntington Park’s finances. Businesses and community leaders are more aware of the financial woes and civic dysfunction undermining this city, and the affront which the appointments of two illegals has served to distract from those issues. 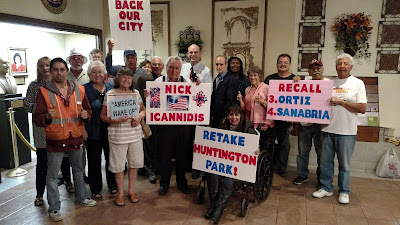 Last of all, I want to join with the Huntington Park residents and honor Nick Ionnidis, a legal resident who immigrated to this country legal with nothing, made something of himself, and has given everything he has to this country and city which he deeply loves.  He deserves to city on Huntington Park City Commissions, an immigrant who respects the rule of law and demands that you do the same.
Posted by Arthur Christopher Schaper at 10:49 PM