The Los Angeles Times has no interest in discussing subjects which place national Republicans in a positive light.

Although the Times endorsed two Republicans for statewide office last year -- Ashey Swearingen and Pete Peterson, the paper has been pushing the Democratic talking points for years, and they are reaping the consequences.

No one reads the paper anymore, and they are cutting staff left and right.

One of the particular strains of thought in the paper suggested that the Republican Party is in "chaos" or "dissarray".

That is not true. The real disarray lies with the Chamber of Commerce and the crony-ist elements which have taken over the Democratic and Republican leadership.

Rep. Kevin McCarthy (R-Bakersfield) stunned fellow lawmakers Thursday by abruptly announcing that he was withdrawing from the race to become the next House speaker.
The California Republican, who was having trouble convincing GOP conservatives to support his bid, said the party needs someone new to take over after current Speaker John. A. Boenher steps down later this month.
"We're servants. We should put this conference first," McCarthy said Thursday. "If we are going to unite and be strong, we need a new face.''
Party officials canceled plans for Thursday's nomination vote. The fate of a scheduled Oct. 29 floor vote to elect the next speaker remains unclear. McCarthy said he plans to remain majority leader.


Lawmakers had settled in for a long session over barbecue sandwiches when McCarthy stood up and told his peers that he wasn't the right candidate at this moment for the speaker's job.
"He simply said that he didn't want it to be divisive and when it came to running for speaker, [that] he’s not the guy," said Rep. John Fleming of Louisiana, member of the House Freedom Caucus.
Boehner said Thursday that he would remain speaker until the House elects his replacement.
“We will announce the date for this election at a later date, and I’m confident we will elect a new speaker in the coming weeks,” Boehner said. “Our conference will work together to ensure we have the strongest team possible as we continue to focus on the American people’s priorities.”
With Congress in recess next week, another round of nomination voting is not expected until the week of Oct. 19 at the soonest.
A powerful, back-bench block of conservatives had moved against McCarthy, fearing that he would continue to run the House in the same manner as Boehner, who was pressured earlier this month to announce his resignation.


Late Wednesday, the influential Freedom Caucus, which could control between 40-50 votes, threw its support to Rep. Daniel Webster (R-Fla.), one of their own members, who nonetheless has little chance of broader success. The newcomer won 12 votes when he challenged Boehner earlier this year.

It is indeed refreshing to read about the Freedom Caucus having influence. Liberty has that kind of influence, and it always will. Men and women do not want to live under oppression and fear. To quote Tom Petty, "People want to be free!"


Rep. Jason Chaffetz (R-Utah), another candidate who made a last-minute play to run an alternative to McCarthy, suffered a setback when his campaign was panned by the conservatives, leaving him without a base of support.

Is this charge even true? The Freedom Caucus endorsed Daniel Webster of Florida, but his Heritage score is lower than Chaffetz'. A strange endorsement.

On Thursday, Chaffetz said the party needs to elect someone who will stand up to President Obama.
"I believe it is time for a fresh start,'' Chaffetz told reporters. "That's the whole genesis of my campaign."

McCarthy's stunning withdrawal leaves the House GOP in disarray. Though it averts one possibly nasty, contested leadership fight, it leaves unanswered the question of who might step in to unite the party.

No it doesn't. This is a lie. Anytime that one concentrated special interest is no longer dictating policy and leadership, the mainstream media will cry out: "Disorder!" Such is the case for anyone who opposes individual liberty.


McCarthy's bid for the post was hurt after a high-profile TV stumble in which he appeared to suggest that the GOP-led House investigation into the 2012 Benghazi attack was partly aimed at weakening Democratic presidential front-runner Hillary Rodham Clinton. Critics capitalized on the remark.


"That wasn't helpful,'' McCarthy said Thursday at a press conference, as his wife stood beside him. "I could have said it much better."

McCarthy is a married  man, and the rumors about his affair with Renee Ellmers were sparking more concerns about his run, too, perhaps.

But mostly many conservative House members were worried that they would be hard-pressed to explain to voters back in their districts that they had supported McCarthy, who was seen as too closely aligned with the current GOP leadership.

Yes indeed. The crazies have taken over the party, because they are crazy enough to respect the wishes of their constituents rather than the Chamber of Commerce.

Some Republicans were hoping to recruit Rep. Paul Ryan (R-Wis.), the former GOP vice presidential candidate, for the post. But Ryan has repeatedly said he is not interested.

Thank goodness. Paul Ryan has begun to slip in his leadership skills. He has a lower Heritage score than even Kevin McCarthy.

Leaders of the Freedom Caucus planned to regroup later Thursday to assess their options. Many conservatives said they would not necessarily stick with Webster and that all options were open as they tried to choose a leader.

So glad to hear this good news. The Freedom Caucus can do way better than Webster.

Sorry Mick. You are wrong on that count. We do not need caretakers. We need people who will take care that the laws are enforced and that the Constitution is respected and obeyed.


More moderate Republicans, though, said it was time for deep soul-searching in the GOP to decide whether the party wants to continue allowing a minority of its most conservative members to have such power.

That is a lie. The issue does not even depend on whether there is a minority of majority of conservative House Reps. There are more conservative voters in this country who want someone to stand up to Barack Obama and his illiberal repressive agenda.

Rep. Charlie Dent of Pennsylvania, who was backing McCarthy, said he warned Republicans that "those who wanted to take down John Boehner will frag the next guy and that's what we saw just happened .... I'm not going to support anyone running for speaker who is going to appease the rejectionist wing of this party."

The next speaker’s challenge will be “simply to unite a divided Republican caucus,” said White House Press Secretary Josh Earnest.

Does anyone care what Josh Earnest thinks?

“There is a minority group of conservative Republican politicians that places their own extreme ideology ahead of everything else, and certainly ahead of effective governance of the country — but also as of today, ahead of the effective governance of the House Republican caucus,” Earnest said.
Someone will have to step forward to either “tame the forces of that small but vocal group of extreme ideologues or buck up the mainstream, or at least more mainstream, majority within the House Republican conference,” Earnest said.

I am fed up with the ideological bullying of the Left and corporate cronies, calling people who stand for truth and liberty as "extreme." Peter King waded into that name-calling, and has only further hurt his credibility.

Fighting instead of compromising has not been the Washington way for years, but we need a resurgence of this combative nature in politics.

The political class which has benefited from backroom deals, on the backs of taxpayers, is running scared. As they should be. The Constitution was never designed for a limited aristocracy of aristocrats and well-connected politicos to exploit the system and upend the checks and balances at the expense of everyone else. 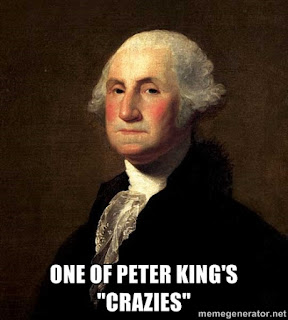 The House conservatives recognize that they do not need numbers among their colleagues. They have the needed numbers throughout the country, and the same people who demand accountability, transparency and security are pushing every member of Congress to start doing their job.

The conservative movement is gaining momentum, moving across the country, We have a new birth of liberty, a restoration of grace and truth, which teaches us that our salvation does not lie in the state, and that the federal government cannot be the final dictate for our lives or values.

Posted by Arthur Christopher Schaper at 10:14 AM