I was surprised and pleased that The Daily Breeze wrote an article highlighting Assemblyman David Hadley's legislative achievement AB 306, which will allow children in military families to enroll in any school they wish, and prevent home districts from blocking the permit process.

Gov. Jerry Brown has signed a bill allowing active military members stationed in California to enroll their children in the school district of their choice without a “veto” from the home district.

Many residents in the state of California are unaware of this subtle restraint on school choice, which many school districts can exercise against individual families. It has irritated me to no end when talking with liberals in general, and some school board members when they rebuff me with "We already have school choice!"

No, we do not! Steven Greenhut, writing for the San Diego Union-Tribune, shared about the internecine troubles hurting families who want good schools for their kids:


Some school districts are opposed to the concept, which makes the transfers nearly impossible. Sometimes the issue is money, given that the “Average Daily Attendance” dollars follow the students. For some of the state’s struggling districts, it’s also an embarrassment if they have large percentages of kids heading elsewhere.
It's not about the kids. It's all about the money, and money which school districts do not compete for, because students by and large must attend the school district in their zipcode.
Greenhut continues:
As the California Department of Education explains, “Although students have the right under California law to a free, public education, the law does not guarantee that a student can attend the school of his or her choice, or even the neighborhood school.” The guarantee is to attend a school within “the district’s attendance area.” If it’s not such a great school, that’s too bad.

Here is one sad story about the district politicking which hinders choice:


A few days before the bill’s first hearing, Hadley scheduled a tour at the Los Angeles Air Force Base, near his South Bay district. He was accompanied by two Democrats from Los Angeles-area districts, Sen. Ben Allen and Assemblywoman Autumn Burke.
Hadley told me that as they prepared to tour the base, his staff was informed that the majority recommendation was for a “no” vote and it would be killed on a party line vote. But during the tour the base commander told her personal story of her husband and kids staying back in Virginia for more than a year because they couldn’t get permission to attend a nearby school. (The schools in the district tend to be low-performing ones.) An airman shared his story — his daughter was accepted to a school in Manhattan Beach, but by the time it was approved by Los Angeles Unified School District, the slot was gone. 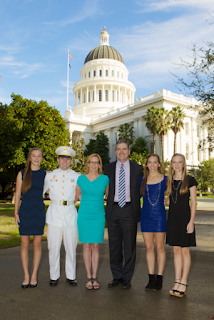 That is just disgraceful. Parents were forced to keep their child three thousands miles away so that she could attend a good school, because LAUSD blocked the transfer to Manhattan Beach.
With Governor Brown's signature on AB 306, no child will ever be left behind!
The Daily Breeze gives more background on the new law:

Authored by Assemblyman David Hadley, R-Manhattan Beach, AB 306 will go into effect in January 2016. He said the law will help military families concentrate their efforts on securing positions in school districts that are right for their children.

In a Daily Breeze editorial published in April, Hadley said the law would create more schooling options for military families stationed at the Los Angeles Air Force Base in El Segundo and other California bases that are currently limited to the designated public school districts that serve on-base housing.

Has anyone looked at the current housing prices in the South Bay? Even in San Pedro, CA, with Los Angeles Unified, the homes along the coastline and near Point Vicente are too high for military personnel.

Why should they have to settle for bad schools just because they cannot afford ritzy housing in Manhattan Beach or Hermosa?

He said the change could potentially draw military personnel considering deployment to the L.A. Air Force Base, whose families are housed at Fort MacArthur and other locations in San Pedro and served by Los Angeles Unified School District.

This legislation was a no-brainer, in that it should have been passed a long time ago.. Democratic lawmakers representing the South Bay could have done something to pass this legislation years ago, and yet did nothing. Why? Because they live in bondage to teachers unions, who oppose school choice of any kind.

“We have a big challenge to make the L.A. base as competitive as possible and attractive as possible,” he said. “We know from people on the base that our public schools options are one of the most important things for military families. By improving the options for people, we’re really improving the attraction of the base.”

• Live on base and send their children to schools in the Los Angeles Unified School District.

• Live in the South Bay and send their children to the home district.

• Live on base and pursue a waiver from LAUSD to opt out of the school.

What many people do not realize about LAUSD, not just that the schools are woefully underperforming, and riddled with dysfunction and corruption, but that many families struggle to seek permits to enroll in another school district.

Why should they face any hurdles to seeking a  better school?


“I am so pleased that the families stationed at LAAFB, and other military installations across the state, will be able to select the school that is best for their children,” said state Sen. Ben Allen, who represents the coastal South Bay. “These families face many challenges in the service of our country, and this new policy is an important way to show our support for them.”

For once, I have strong kudos for a Democratic lawmaker, including one as liberal as Ben Allen. For him to take this unprecedented step and pass a bill to expand school choice for anyone in the state of California, well -- it is just brilliant and commendable. Thanks also to Assemblywoman Autumn Burke. If she continues voting for freedom reforms and pro-family bills, she will continue to command my respect.

Special interests in Sacramento will be smacking their heads, wondering why they did nothing to stop this bill when they have the chance. Already, Big Labor's influence is slipping in the state of California, and this bill is just one further chip at their power.

We have more school choice in California, and through legislation initiated by a freshman Republican, the most targeted lawmaker for removal in 2016. This victory is not getting the vetting which it deserves.
Posted by Arthur Christopher Schaper at 11:58 AM